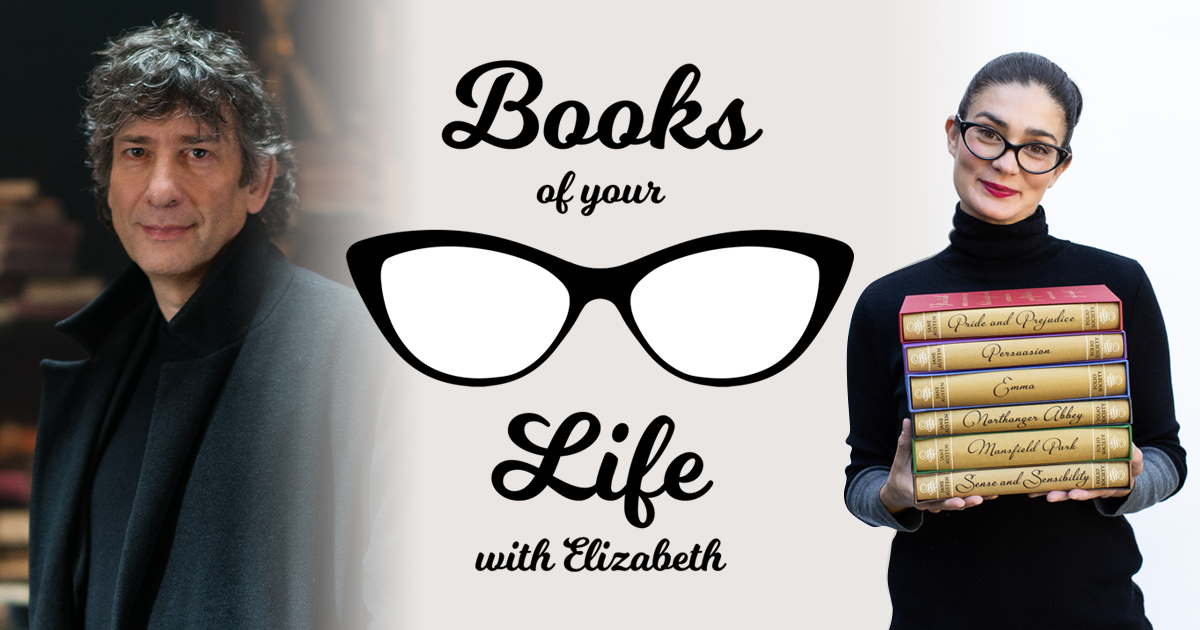 In the latest edition of the Books of Your Life with Elizabeth podcast, Goodreads Co-Founder Elizabeth Khuri Chandler talks to legendary fantasy writer Neil Gaiman, author of Coraline, American Gods, and The Sandman comic series. Now, Good Omens, the book he co-authored with the late Terry Pratchett, is the subject of an adapted series from Amazon.

Gaiman talks about “playing God” as a writer, shares memories of his friend and collaborator Pratchett, and names the books that changed his life—including the children’s book series that inspired him to start writing Good Omens.

You can be part of the conversation, too. We’ve created a book club to accompany our podcast, where you can discuss each guest’s recommendations.

Be sure to subscribe to the podcast to hear the latest interviews and to get great book recommendations from fascinating people.

You can listen to episodes of Books of Your Life with Elizabeth on iTunes, Google Play, Spotify, TuneIn, Stitcher, and wherever you find your favorite podcasts.

Can you guys do transcripts of these podcasts for those of us for whom listening isn't a great option?

Man....RIP Gene Wolfe. I originally picked up Shadow & Claw because of Gaiman's blurb seven years ago. Read Shadow, fell off hard partway through Claw. Wolfe is a difficult writer, and I just wasn't ready yet. I was 21 for crying out loud.

Mainly I wasn't yet comfortable being confused, and not knowing where the story was going. Wolfe isn't quite as difficult as his reputation suggests, but his work does require the reader to A) pay attention and ask questions and B) trust him enough to wait patiently until the story arrives at its destination, at which point you can get out of the car and have a look at where you are and where you came from. You can't have orgasmic epiphanies without a period of confusion, that's just the price that must be paid.

Me and a close friend started on a journey to read all of Wolfe's work early last year. I'd been wanting to give Wolfe another try and we wanted a book club that would lead to a lot of discussion and theorizing, something challenging but also fun and nerdy. Seemed like the perfect fit. We've read The Fifth Head of Cerberus, Book of the New Sun, Urth of the New Sun, and are currently on book four of Book of the Long Sun. It is now hard to believe I ever put one of his books down unfinished. Hands down the greatest writer I've ever had the pleasure to read (sorry Neil, but you were my favorite for ten years, it was a good run =P).

GO READ GENE WOLFE PEOPLE! DO IT!
I highly recommend starting with Fifth Head of Cerberus rather than Book of the New Sun. It's much less of a commitment and just as much of a masterpiece, imo.

Are these not available outside US?

Yees, Neil Gaiman, my top author sharing the post number one along with Terry Pratchett....the podcast was great, thank you! I had no idea how much Gaiman was actually involved with the Discworld serie I love so much. I could listen to him talk for hours :) and I especialy, of course, loved the part where he talks about Terry Pratchett.

Ankit wrote: "Are these not available outside US?"

They should be. I use Pocketcast for podcasts and they are on there as well.

Erin *Proud Book Hoarder* wrote: "Ankit wrote: "Are these not available outside US?"

They should be. I use Pocketcast for podcasts and they are on there as well."

Google Play Music has some problem. Works on Spotify.