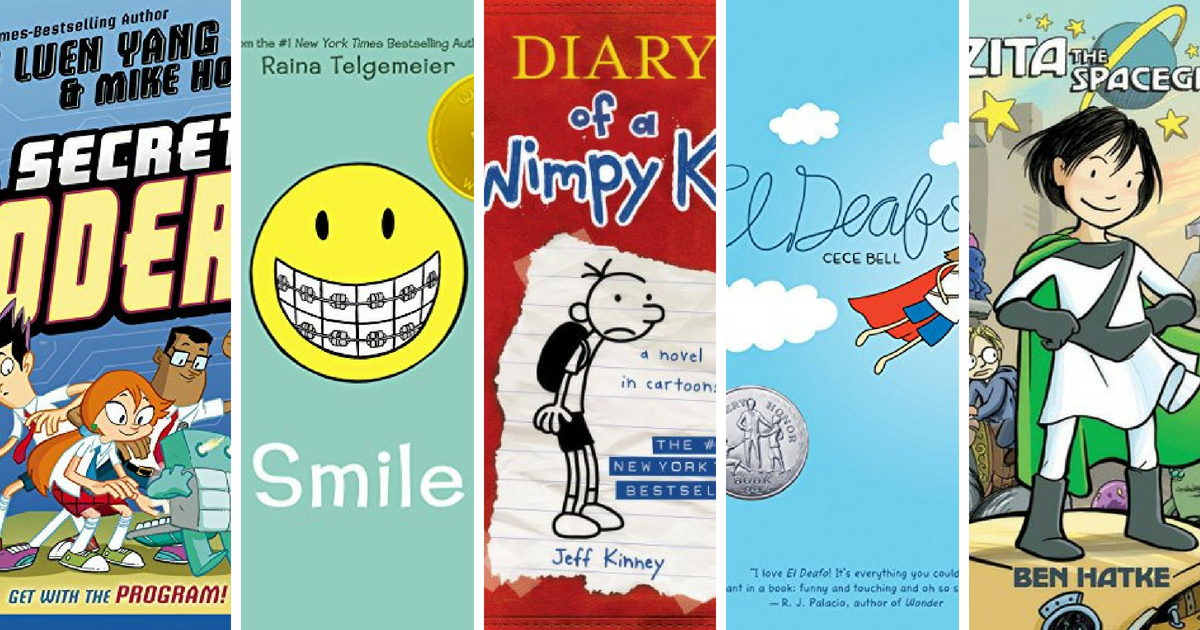 If you're still looking for books to inspire your young reader, middle grade graphic novels just might do the trick. Perfect for children between the ages of 9 and 12, these novels are fast-paced, visually hypnotic, and tell heartwarming stories that explore everything from feeling out of place to forging friendships in different solar systems. So we took a look at the most popular titles in this rapidly growing (and award-winning) genre and brought you the best of the best.

For this round-up, we measured popularity by looking at how many times a book has been added to Goodreads members' Want-to-Read shelves. From there, we narrowed down our list to only include titles with at least a 3.9 star rating. Which titles will your middle grade readers be picking up this summer?


What graphic novels would you recommend for middle-grade readers? Let us know in the comments!

Loved Roller Girl and El Deafo! My daughter (10) has picked up a few of these as well. Looking at Dogman for my son (7).

Hey, this is a sponsored list. Great stuff, but leaves out an important trilogy from Top Shelf/IDW publishing, March March: Book One March: Book Two and March: Book Three, by John Lewis, Andrew Aydin, and Nate Powell. Keep reading all these great books!

My kid expected "Amulet" on the list. He's read or heard of all of them.

Spiderella, the Girl who Spoke with Spiders by Romey Petite Illustrations by Laurel Holden

Francesca Hampton's two novels for younger teens and older children are full of adventure, suspense, and deep ecological passion. I continue to think of them after reading them--one of my tests for quality. The Voyages Of The Makai--vols 1 & 2. The first is named The Dolphin Singers and the second is named Greystone's Promise.

Andrew wrote: "My kid expected "Amulet" on the list. He's read or heard of all of them."

Yes, hard to believe that Amulet 1-7 didn’t make this list. There are so many good graphic novels these days and it really gets the non-readers in my library happy to read!

Has anyone read the Cardboard Kingdom?

Patricia wrote: "Has anyone read the Cardboard Kingdom?"

My 10 year old did and enjoyed it.

Courtney wrote: "The list looks like a school’s book faire :/ not all bad, but it feels like it’s missing a lot."
This is ranked by how many times it got added as plan to read and 3.9+ books.

Cindy wrote: "Loved Roller Girl and El Deafo! My daughter (10) has picked up a few of these as well. Looking at Dogman for my son (7)."

My 7-year-old nephew has read the whole Dogman series and loved it. Highly recommended for that age group.

Thanks for this list! My daughter loves graphic novels, and sometimes I struggle to find good ones that she hasn't read yet. She has only read about half of these, so now I have some new suggestions!

"Positively Izzy"
Not for young people

I would recommend Nimona by Noelle Stevenston. A bit dark near the end, but it's unique, has a small cast, and plays with the bad guy versus good guy approach. Worth a read. Plus an animated feature film adaptation, produced by 20th Century Fox Animation and Blue Sky Studios, is scheduled to be released in 2020.

And the Ms. Stevenson also worked on the Lumberjanes comics (Highly recommend for being progressive and funny while still tame and charming) and the Adventure Time comics afterwards (since she was a writer for the show, which I have not watched :( ).

Point is, I recommend Nimona and Lumberjanes to any Young Readers. Also: Amulet (since it's finally finishing at 9 volumes), Giant Days (if they want a taste of comedic art college mayhem), and any of the Flight collections if they want a light artistic collection from various authors about...well, flying. :)

Or just go with the Novels or Graphic Novels of the Harry Potter series. The originals got me into reading during Grade 4/5. Highly recommended. And then watch the films afterward. But keep to books first.

She never worked on Adventure Time and moments of Flight/Giant Days I would say wait until you are a bit older than the Dog Man target audience.

reply | flag
message 17: by [deleted user] (new)
Aug 14, 2018 08:57AM
Thanks for this list. I am a librarian that relies on patron likes more than expert reviews. I sent this list out to patrons asking which they would like to see added. Dogman won and will be added soon! In an attempt to hook reluctant readers and those who favor this genre, I have separated out the graphic novels, manga, and comic books. Is there some way that I can query what other titles are considered graphic novels in this reading level?

Thanks for this list. I borrowed a couple titles from my library for my 10-year-old granddaughter who is not a strong reader and she visited today and consumed "Smile" by Raina Telgemeier in one sitting. I was grateful to keep her off the electronics.

I loved smile and sisters!!