Posted by Cybil on January 17, 2018
103 likes · 21 comments
Daniel Pink is the author of Drive: The Surprising Truth About What Motivates Us. His new book, When: The Scientific Secrets of Perfect Timing, digs into the research to make the case that timing isn't an art; it's a learnable science. Here Pink shares his insights on the power of a perfect ending. 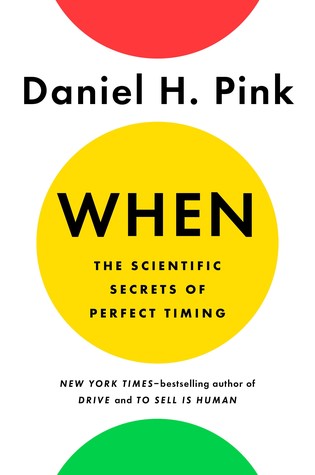 Error rating book. Refresh and try again.
Rate this book
Clear rating
1 of 5 stars2 of 5 stars3 of 5 stars4 of 5 stars5 of 5 stars
A great novel and a well-lived life have much in common. Neither typically follows a clear, linear path. More often, they’re both a series of episodes—with beginnings, midpoints, and endings. The emerging science of timing has shown that each of these stages has a distinct effect on our behavior and well-being. But endings are especially powerful, as I show in my new book When: The Scientific Secrets of Perfect Timing. And we can get better at recognizing the power of endings with a simple technique.

For example, read the following sentence:

"In the late summer of that year we lived in a house in a village that looked across the river and the plain to the mountains."

The literary among you might recognize these words as the first sentence of Ernest Hemingway’s A Farewell to Arms. In literature, opening lines bear a mighty burden. They must hook the reader and lure her into the book. That’s why opening lines are heavily scrutinized and long remembered.

(Don’t believe me? Then call me Ishmael.)

But what about last lines? The final words of a work are just as important and deserve comparable reverence. Last lines can elevate and encode—by encapsulating a theme, resolving a question, leaving the story lingering in the reader’s head. Hemingway said that he rewrote the ending to A Farewell to Arms no fewer than thirty-nine times.

One easy way to appreciate the power of endings and improve your own ability to create them: Take some of your favorite books off the shelf and flip to the end. Read the last line. Read it again. Ponder it for a moment. Maybe even memorize it.

Here are some of my favorites to get you started.

"'It isn't fair, it isn't right,' Mrs. Hutchinson screamed, and then they were upon her."
—The Lottery, Shirley Jackson

"For now he knew what Shalimar knew: If you surrendered to the air, you could ride it."
—Song of Solomon, Toni Morrison

"In a place far away from anyone or anywhere, I drifted off for a moment."
—The Wind-Up Bird Chronicle, Haruki Murakami

"So we beat on, boats against the current, borne back ceaselessly into the past."
—The Great Gatsby, F. Scott Fitzgerald

In stories as in life, endings leave an imprint. Endings affect us in multiple ways. They help us encode—to evaluate and record what we’ve encountered. They help us energize—often inspiring us to act better or differently because of what we’ve learned. And they help us elevate—not through syrupy, cliched "happy" endings, but through endings that deliver meaning, purpose, and significance.

It’s probably no surprise to serious readers that good books and meaningful experiences share common ground. What’s more surprising—heck, as a serious reader myself, I consider it exciting—is that we can use literary endings to enrich our personal endings.

Oh, that last sentence of A Farewell to Arms—the one Hemingway finally settled on? "After a while I went out and left the hospital and walked back to the hotel in the rain."


Be sure to add Daniel Pink's When: The Scientific Secrets of Perfect Timing to your Want to Read shelf.

Thank for sharing this essay! I do enjoy the ending sentences of a book more than I do the beginning...for the most part. The Hobbit might be an exception. 😊

Wow great essay, thanks so much for sharing. My personal favorite: “Somewhere beyond the sinkhole, past the magnolia, under the live oaks, a boy and a yearling ran side by side, and were gone forever.” -The Yearling

Oh the ending of "Animal Farm". Even though I knew what was coming, I was still horrified.

I think The Lottery definitely has one of the best last lines. Jane Eyre and Gone with the Wind are two of my personal favorites! A very cool essay.

I ate this up. First and last lines have always been touchstones for me in great books. When I wrote my first novel, "The Assassin's Wife," the first line was easy, but I struggled for days to get the last line perfect. Thanks for the essay.
dsd

Animal farm was the best, still can't get over that book

My friend, who is a retired comedian, invited me to have dinner at the home for retired comedians.
But, I'm not a comedian, retired or otherwise.
No problem. Just follow my lead. All you gotta know is that they know all the jokes, & so they just refer to them by number. So, if someone calls out a number, and they all start to laugh, just play along.
So I did as he told me and all was going well. #23! Ha ha ha. #68! He he ho. It was going so well that I thought I would give it a shot: #45!
Silence. No one laughed. Crickets. What's the matter? Isn't 45 a good joke?
No, #45 is a great joke.
So, then why didn't they laugh?
Timing.

The last sentence of The Book Thief by Markus Zusak resonates to me after reading this.

"I am haunted by humans."

I know this was about endings, but if you're GOING to include examples of 1st sentences, you GOTTA include Stephen King's 'The Gunslinger', no?? It sets up the entire multi book SERIES in one line!! --Jen from Quebec :0)

Another Orwell last line which was hauntingly brilliant - “He loved Big Brother.”

One of those lines that really struck me was from Waugh's Scoop.
"Outside the owls hunted maternal rodents and their furry brood"
Has a dark charm, I think.

Two last lines that have stuck with me:

"O God, please give him back! I shall keep asking You." (A Prayer for Owen Meany. Two lines, really, but so good.)

This ending, by Graham Greene for "The Quiet American", is what makes the entire novel great:

"Everything had gone right with me since he had died, but how I wished there existed someone to whom I could say that I was sorry.”

“The offing was barred by a black bank of clouds, and the tranquil waterway leading to the uttermost ends of the earth flowed somber under an overcast sky—seemed to lead into the heart of an immense darkness.”

Thank you, for pointing out that a great novel and a well lived life have valuable parallels. Additionally; for giving examples, providing a glimpse into your newest books deep research into the science of timing, and for my personal goals; adding more books to my want to read list. I appreciate the content, consistency, and concepts you write about. The way you communicate in your books is as if you are gently putting the reader into a carnival ride of a centrifuge. When the reader is finished with the book they have been able to experience the parts of the whole deeply and individually so that they can now process the parts separately as they had not seen before and reconstruct them in their own reasoning and timing to then understand the whole clearly. So I guess its the 'when' in your books that gets me / us. Bravo again on content and consistency. I like an often overlooked classic Silent Spring by Rachel Carson for her beginning and ending although her midpoints are well respected and remembered is seems that ending is tripping us up. Beginning -"There was once a town in the heart of America where all life seemed to live in harmony with its surroundings." ... Ending - "It is our alarming misfortune that so primitive a science has armed itself with the most modern and terrible weapons, and that in turning them against the insects it has also turned them against the earth." I'm looking forward to reading WHEN

Can you help me understand the differences you see between "meaning, purpose, and significance" ? I'm intrigued.

I love the Franz Kafka's beginnings.

Last day i was searching blog for New year Holidays then i searched this New year Blessing quotes 2019. amazing blog related to New year so you must check this out .

Endings are like show stoppers, they keep you wanting more... & here is when you carry the story into your life...