Grady Hendrix, who brought readers My Best Friend's Exorcism and Horrorstör, is back with a new book about the pulp horror boom of the 1970s and '80s with Paperbacks from Hell. He's been reviewing the novels he read for research on his Goodreads page—currently 170 strong and counting. Here he takes us on a tour of the bloodiest, strangest, and downright bizarre paperback horror novels. 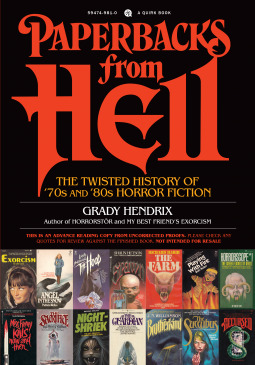 During those 24 years, an avalanche of paperback horror novels with lurid covers buried drugstore and bookstore shelves. Publishers were locked in an arms race to go further over the top than their competitors, so when they weren't dishing up resort spas run by evil Nazis, pterodactyls riding the New York City subways, or Hollywood death cults run by a barely disguised version of Paul Newman, they were startling unwary readers with covers featuring skeletons playing the banjo, teddy bears wielding axes, and evil babies torturing tiny humans trapped in test tubes.

Horror wasn't much of a genre before 1967, when Rosemary's Baby hit the bestseller lists and became a hit movie. A few years later The Exorcist and The Other accomplished the same feat, and a boom was born.

At first, publishers fell all over themselves to deliver more books about Satan (Satan's Pets, Satan's Seductress, Satan's Lovechild), but soon they branched out into killer kids, killer animals, then killer houses, and finally killer everything, from soap opera stars (Phantom of the Soap Opera) to 16th-century Viennese dance crazes (Waltz with Evil).

I read over 400 of these paperbacks to write Paperbacks from Hell and have barely tasted the fruits of this boom. Sure, I talk a lot about John Christopher's The Little People featuring Nazi leprechauns, but how did I miss J.N. Williamson's killer leprechaun novel, Playmates?

There's always one more lunatic corner to explore in the world of horror paperbacks, and while some of these books are so bad, they're good (Toy Cemetery, I'm looking at you), there are plenty that are so good, I can't understand how they were forgotten in the first place.

Ken Greenhall's Elizabeth and Hell Hound are written in Shirley Jackson's precise, chilly diction. Bari Wood's The Tribe and Tom Lewis' Rooftops are two of the best books I've read about New York City as it transitioned from the savage '70s to the go-go '80s. The fact that they're about a killer golem on the loose in Long Island and a serial killer who castrates little boys is beside the point. Throw in 1982's John Shirley classic, Cellars, and you've got a trio of books about a simmering pressure cooker of a city that simmers with so much corruption, sleaze, racial tension, and economic anxiety that it erupts into full-blown supernatural seizures.

These horror writers worked fast and cheap, so they couldn't get too self-conscious about their output: If they didn't get another book on the shelves soon, their family wasn't going to eat. Sometimes this meant they discovered marginal trends years before they surfaced in the mainstream. Nice, privileged kids from good families who are hopelessly, homicidally insane formed the basis of several books (The Sibling, Such Nice People, Halo) years before we learned to fear these kids in the wake of the Columbine shootings and the Menendez brothers murders.

It all came to a screeching halt in the late '80s and early '90s with the publication of The Silence of the Lambs and its hit movie adaptation, which swept the Oscars in 1991. After that, serial killers were the order of the day, and horror novels were rebranded as thrillers. The tide receded, but it left such amazing relics behind in the sand, from Guy N. Smith's killer crabs to John Halkin's killer jellyfish.


See the complete coverage of Horror Week including:
Top 50 Favorite Horror Novels on Goodreads
Stories That Delve into the Darkness
Supernatural Tales and Spooky Folklore

I remember this genre well from my adolescence. You've inspired me to to go looking for these at book sales and Half Price Books!

this is my favorite post ever. i've had an armchair appreciation of pulp horror for a long time, but now i'm feeling inspired to actually locate and read all the evil cat ones. starting with

I loved these books back then, and still do now

Erin ☕ *Proud Book Hoarder* wrote: "I loved these books back then, and still do now"

i came upon some of your listopia lists today for zebra titles and they made little hearts spring up in my eyes!

Paperbacks from Hell is a terrific book. But it only scratches the surface of horror in paperbacks. I really hope the authors will publish a companion piece that dives deeper and covers many obvious choices that were oddly neglected.

well, sure - it's an enormous pool from which to draw. he could publish one of these a year and still only scratch the surface. of the .. pool - am i mixing metaphors here? but if that is the plan, i support it entirely.

I remember this whole craze of reading this stuff in 1979... stuff like Lupe, this demon child (or is he?) and this gory one called "The Necklace" that made people do really icky murders... but it really started with John Saul, "Suffer the Children". Lots of demonic possession or just evil crazy people. Lurid. Just the thing a teenaged girl LOVED!

I read so many of these books in my teens. One of my favorites was Imp by Andrew Neiderman

aw man, now i have to go up to the attic and dig out my old Guy N Smith books. I forgot how much i love this stuff.

This is the genre that sparked my love of reading as a kid. I couldn't devour these quick enough and my dad couldn't afford my habit. I would scour used book stores, the Goodwill and yard sales, buying solely based off the cover art. I feel the need to go to a Goodwill this weekend and do some searching.

I love horror novels though I have not read many books in the genre. Stephen King is the best but pulp fiction horror books also have a charm of their own!

I skip them all. I don't do gruesome, or scary.

I have some I used to love, but they're all so nuts! Kinda the charm!

Dane wrote: "I remember this genre well from my adolescence. You've inspired me to to go looking for these at book sales and Half Price Books!

Thriftbooks.com is great, too. You get $5 off coupons for every $50 you spend, and (most of) their prices are great. Love them.

These were my teenage years. I had such a collection of creature features and pulp trash. Happy memories.

Great book, though I was hoping to make a sizable list of books to search for. It seems I have about 95% of the books discussed. I'd love to see a follow up on particular authors or publishers.

Gordon, he is mentioned in the book. He has a small section devoted to his books.

Thanks for the suggestions!

Oh, great, your article gives me useful information and a fresh perspective on the subject. Loveawake

I like your article very much, thanks for sharing the good information we have read.
gmail login

Thanks for Nice and Informative Post. This article is really contains lot more information about This Topic.
hotmail login