Readers' Favorite Quotes from The Catcher in the Rye 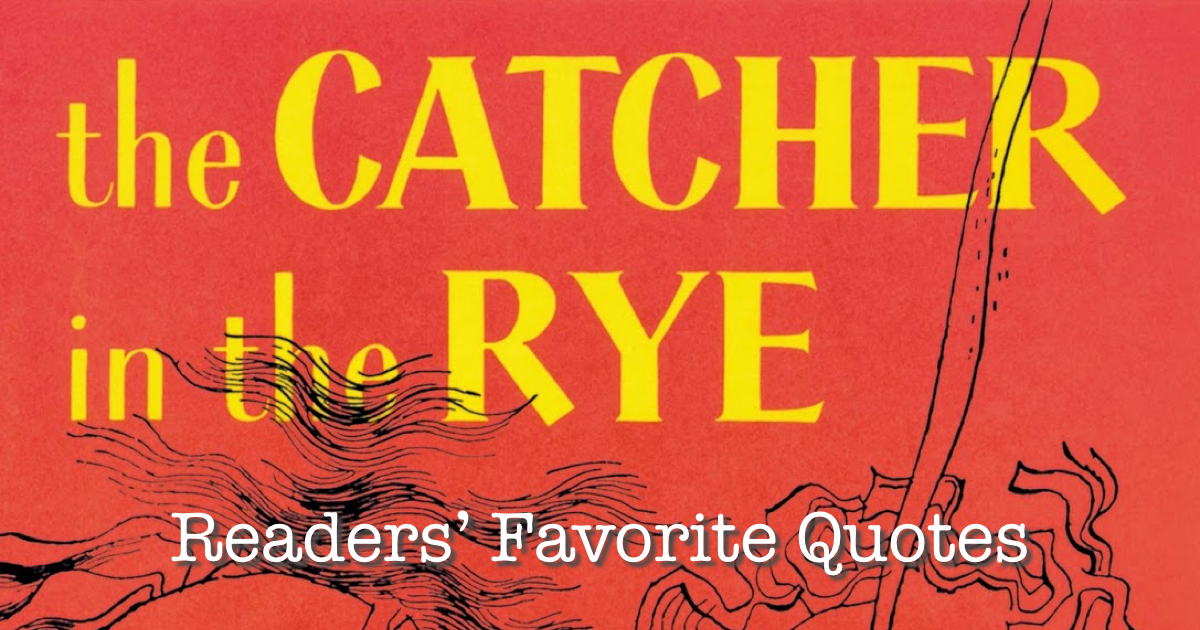 Holden Caulfield gets us…or the us we used to be. The protagonist of J.D. Salinger's The Catcher in the Rye is an icon, a literary champion of teen rebellion and angst. Many of us first met him in school, as part of our required reading, and we were pleasantly surprised to find a kindred spirit there, a fellow reader, dreamer, and cynic.

With Salinger's own story about to come to the big screen in Rebel in the Rye, we took a look at the most beloved quotes from his classic novel, as selected by Goodreads members. (And check out ten interesting facts about The Catcher in the Rye here!)


1. "What really knocks me out is a book that, when you're all done reading it, you wish the author that wrote it was a terrific friend of yours and you could call him up on the phone whenever you felt like it. That doesn't happen much, though."

2. "Don't ever tell anybody anything. If you do, you start missing everybody." 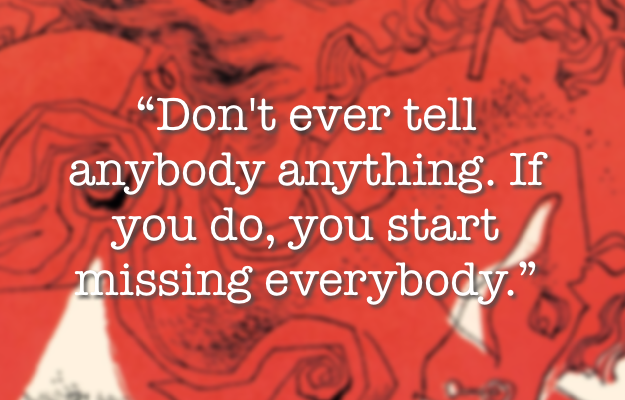 3. "Among other things, you'll find that you're not the first person who was ever confused and frightened and even sickened by human behavior. You're by no means alone on that score, you'll be excited and stimulated to know. Many, many men have been just as troubled morally and spiritually as you are right now. Happily, some of them kept records of their troubles. You'll learn from them—if you want to. Just as someday, if you have something to offer, someone will learn something from you. It's a beautiful reciprocal arrangement. And it isn't education. It's history. It's poetry." 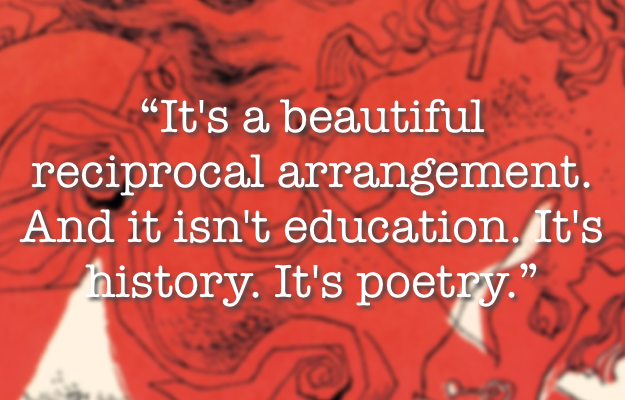 5. "Anyway, I keep picturing all these little kids playing some game in this big field of rye and all. Thousands of little kids, and nobody's around—nobody big, I mean—except me. And I'm standing on the edge of some crazy cliff. What I have to do, I have to catch everybody if they start to go over the cliff—I mean if they're running and they don't look where they're going I have to come out from somewhere and catch them. That's all I do all day. I'd just be the catcher in the rye and all. I know it's crazy, but that's the only thing I'd really like to be." 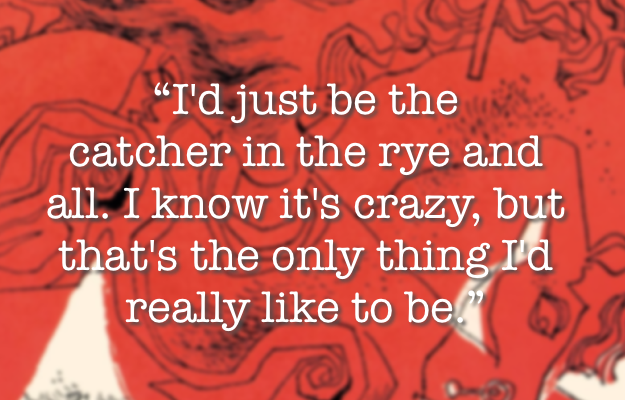 6. "I am always saying 'Glad to've met you' to somebody I'm not at all glad I met. If you want to stay alive, you have to say that stuff, though."

7. "I like it when somebody gets excited about something. It's nice." 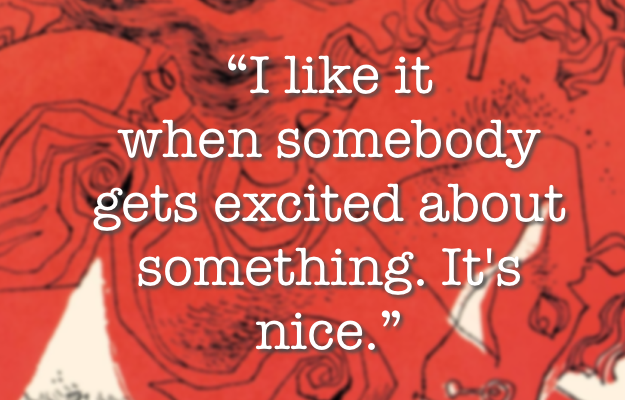 What's your favorite quote from The Catcher in the Rye? Share it with us in the comments!

Check out more recent blogs:
Growing Up Into Goodreads
Five Stories of Friendship and Favorite Books Found on Goodreads
Hide a Book with Goodreads
Like · 85 likes · 26 comments

One of my favorite quotes is "People never notice anything".Truer words were never spoken and this is so freaking true...This is my top favorite book EVER.♡♡♡. I am completely surprised that Hollywood found a loophole in which they utilized to make the "writing" of this book into a movie.J.D. Salinger would not approve as he firmly and flatly rejected all attempts from some of Hollywood bigwigs offer to turn this gem of a book into a movie. He wanted people to read it.

Here's mine: "Goddamn money. It always ends up making you blue as hell."

I think it's time to give this book a re-read!

One of my all time favorites.

I give it one every year. This year will be the tenth time! :)

"You're a real Prince," and "I'm the God-dammed governor's son."

This book is definitely over-rated

"All you have to do is say something nobody understands and they'll do practically anything you want them to."

"I don't want to scare you, but I can very clearly see you dying nobly, one way or another, for some highly unworthy cause."

Beverly~Lady B wrote: "One of my favorite quotes is "People never notice anything".Truer words were never spoken and this is so freaking true...This is my top favorite book EVER.♡♡♡. I am completely surprised that Hollyw..."

What? They made a movie about writing this book? What is it called? Have you seen it? Is it terrible?

Yes. It's called"Rebel in the Rye". The advertisement graphic for the movie is listed on this page above.

Sensitive. That killed me. That guy Morrow was about as sensitive as a goddamn toilet seat.”

Holden Caulfield was a whiny cry baby. I was cheering when his roommate Ward and the pimp Maurice beat him up. So Holden crying was my favorite quote.

I've read this 14 years ago and I think I should re-read it soon. Wait, there's a movie adaptation?! And Kevin Spacey is one of the casts?Much to my disappointment, it will not be shown here in my country.

The Catcher in the Rye was the first book I read twice.

My always best. I think This is the also useful for you... baholicdotcom

My always best. I think This is the also useful for you
صفحه آرایی

“There wouldn't be marvelous places to go to after I went to college and all. It'd be entirely different. We'd have to go downstairs in elevators with suitcases and stuff. We'd have to phone everybody and tell em goodbye and send em postcards from hotels and all.”

it seems to be really great book

The Bibliophage wrote: "I've read this 14 years ago and I think I should re-read it soon. Wait, there's a movie adaptation?! And Kevin Spacey is one of the casts?Much to my disappointment, it will not be shown here in my ..."

It's not a movie adaptation, it's the life story of the author.

"Don't ever tell anybody anything. If you do, you start missing everybody."