Time to Celebrate… and a GIVEAWAY! I AM SO EMBARRASSED: A Writer’s Shame

I am excited to welcome fellow playwright John Patrick Bray to Not Even Joking today. I have so much to say about his post… but I’ll let you read it first.

“I sort of borrowed your unofficial national anthem for this next song. Don’t worry, I’ll give it back when I’m done.” – Tom Waits, introducing his song “Tom Traubert’s Blues,” which uses the chorus from “Waltzing Matilda,” during a concert in Australia in 1979.

I teach the dramatic writing sequence at the University of Georgia. I dedicate one of my dramatic writing classes to adaptations and, for lack of an appropriate term, “borrowing from” everyday life.  One of the key lessons is that everything we see, everything we hear, everything we do impacts our life as writers. In a way, we are adapting and “borrowing from” our own experiences for the stage. These experiences include time we have spent with other works of art, time spent with friends, and time spent in the act of listening.

There are a number of works which we can consider “verbatim” adaptations – works such as The Laramie Project by Moises Kaufman and The Tectonic Theatre Company; and Fires in the Mirror written and originally performed by Anna Deavere Smith, are both examples. Kaufman and his company listened to the citizens of Laramie, Wyoming in order to create their groundbreaking piece. Smith says that her approach to writing and performing is more akin to journalism, a departure from the traditional models of writing and acting in the U.S., which tends to be grounded in psychological realism/action-objective. For her play, Smith listened and reported, performing the various roles herself.   In Georgia, playwright Will Murdock has written for the Swamp Gravy: The Official Folk-Life Play of Georgia series, which presents dramatized histories and memories from the local Colquitt Georgia community.  As a personal example, The Acadiana Repertory Theatre in Louisiana produced a multimedia work, NightFears, which I co-authored with Keith Dorwick, a Professor of English at The University of Louisiana at Lafayette. Dorwick interviewed members of Acadiana and Lafayette Parishes, leading off with the question, “What fears really keep you up at night?” Dorwick recorded the interviews, a number of which were projected during performance, while I wrote scenes, monologues and vignettes based on those interviews – sometimes keeping them fully intact, sometimes using only an image. We listened, created, and reported.

What these “verbatim” plays have taught me, whether I’m writing something that is grounded in realism or not, is how to write truly believable dialogue, fully realized characters, while not losing a sense of theatricality (movement, music, images, etc.).

I ask the students in my dramatic writing courses to perform two exercises: the first exercise is aptly named “Voyeur.” I ask students to go somewhere in public – coffee shops, airports, bus stations, etc., to put on their headphones (as if they are listening to music), and to write down a conversation between strangers verbatim.  These conversations are then read aloud in class. We hear the rhythms of natural speech; we hear who dominates a conversation, if the listener is bored or completely invested; we learn when and where people pause; we learn why people pause; we hear repeated words, phrases; sometimes folks pause on a sound as they gather their thoughts. I ask them to take these conversational rhythms and incorporate them into a scene they are already working on. For the beginning writer, the results tend to be pretty incredible – their characters become more grounded, more real, and often, much funnier, whether the scene itself is comedic or not. I should mention that I tend to be of the Chekhovian school of thought – if a scene is dramatic, then having some humor will make it that much more poignant; if a scene is not dramatic, having characters mope about the stage will not accomplish much, and therefore the purpose of the scene needs to be reevaluated.  In short, there is much we can learn from natural speech, and our dialogue will only become stronger once we truly listen to people (and write it down!).

(Note: I am not the only one who enjoys listening to conversations between strangers and writing them down. For some non-theatre examples of the Voyeur exercise, be sure to visit the website “Overheard in New York”: http://www.overheardinnewyork.com/)

The second exercise is called the Interview exercise. I ask students to interview someone – a friend or relative. I ask them to lead off with a question having to do with a fear, a favorite food, a favorite song, or a cherished object/token. I tell the students to let the other person talk – don’t try to direct the conversation. If the interviewee starts going on a tangent unrelated to the question, feed that tangent. Follow it. I then ask the students to write a scene based on the interview. It can be a literal adaptation, or it can be something else – notes for a choreographed piece dealing with an object, a brief animation based on a single line, etc.  An example I like to show in class is Ryan, a short animated documentary about Canadian animator Ryan Larkin by Chris Landreth. Ryan won the 2004 Academy Award for Animated Short Film. The short combines interviews with Larkin and those closest to him with Landreth’s first-person narration dealing with his own fear of personal failure.   There are incredibly gorgeous images in the film, which are a combination (or hybridization) of realism and surrealism (for example, there is a character at a table who is smoking; the character seems to have no bones whatsoever; the way his flesh hangs over the table is reminiscent of Dali’s melting watches. In this case, we are watching a man melt away the last, long hours of his life while smoking an endless cigarette). Landreth also includes sequences from Larkin’s animated (and Oscar-nominated) shorts from the late 1960’s/early 1970’s.  At just over thirteen minutes in length, it is one of the most compelling animated shorts I have ever seen, and it opens up the students’ awareness of the multiple possibilities for stage, film, and animated works once we start looking outside of ourselves for inspiration. This is probably one of the most important components of the verbatim exercises: while writers have a personal stake in the world of story, the writers are forced to look outside of themselves for inspiration and for content.

Playwrights are life’s great pick pockets. We “borrow” fragments of known stories, of our own lives, of the lives of others, of art, of music, of food, of dance, and stir it all together in order to create our own new work for the world. This is the greatest function of the writer – to understand our own context, how that context shapes us, and how we, in turn might influence that context.  Wear your ear-buds, keep the volume off, and listen to people. Take note of what they say, how they say it, and just as important, what gets left unsaid. In time these voices will become second nature in your writing, and your characters will feel lifted from everyday life. You just need to listen. Listen, create, report. 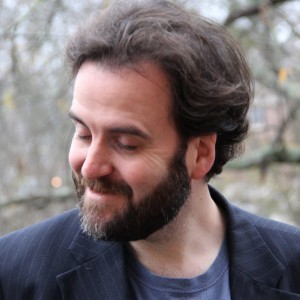 John Patrick Bray (PhD, MFA) teaches at the University of Georgia. His plays have been produced Off-Off Broadway and in independent venues around the country, and a number of them have been published. For more information, please visit: http://www.drama.uga.edu/faculty-and-staff/john-patrick-bray

Thank you, thank you, thank you! I love what you write about borrowing and listening. I think this is an important skill for fiction writers as well (and really all artists.) We need to be present, to observe, to report. Sure that reporting might get skewed for the sake of fiction, but somewhere, even the most wild fiction must be grounded in some sort of truth. The exercises you wrote about also really spoke to me! When I was teaching young playwrights (at the high school level), I would have them do similar writing exercises. And incidentally, I also made both The Laramie Project and Fires in the Mirror part of my theater curriculum, not only because of each play’s content, but also because of the way each play was written. Thank you so much for sharing your wisdom here today!