Interview with Joan Schweighardt, author of ‘The Last Wife of Attila the Hun’ 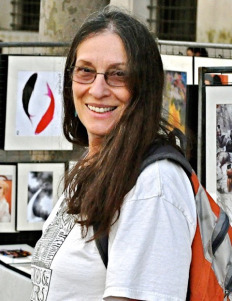 Joan Schweighardt is the author of several novels. In addition to her own projects, she writes, ghostwrites and edits for private and corporate clients.

Two threads are woven together in The Last Wife of Attila the Hun. In one, Gudrun, a Burgundian noblewoman, dares to enter the City of Attila to give its ruler what she hopes is a cursed sword; the second reveals the unimaginable events that have driven her to this mission. Based in part on the true history of the times and in part on the same Nordic legends that inspired Wagner’s Ring Cycle and other great works of art, The Last Wife of Attila the Hun offers readers a thrilling story of love, betrayal, passion and revenge, all set against an ancient backdrop itself gushing with intrigue. Lovers of history and fantasy alike will find realism and legend at work in this tale.

Q: Congratulations on the release of your latest book, The Last Wife of Attila the Hun. To begin with, can you gives us a brief summary of what the story is about and what compelled you to write it?

A: The book is about a Burgundian noblewoman in 450 a.d. who goes to the City of Attila to give Attila what she believes to be a cursed sword. There are two threads throughout the book, one describing what happens to her in the City of Attila and one illuminating the reasons she went there in the first place.

Q: What do you think makes a good historical novel? Could you narrow it down to the three most important elements? Is it even possible to narrow it down?

A: My publisher is calling The Last Wife of Attila the Hun a “literary historical novel,” because every book that gets published has to have some genre classification and literary historical comes the closest. However, the book doesn’t fit neatly into that category. I researched two bodies of materials to write The Last Wife of Attila the Hun. I thoroughly researched Attila, not only regarding his life in his “city” but his relationship with the emperors of the eastern and western Roman empires during the very intriguing historical period in which the story is set. But I also researched Nordic legends that concerned the Burgundian tribes, some of whom seem to have had unfortunate dealings with Attila. I like to say the book is a “historical novel with a strong legendary component,” or “a novel based on legend within a solid historical setting.” I would say any book in this same unnamed genre should be well researched and should balance its influences so that the strands flow together and the world the writer creates feels believable. 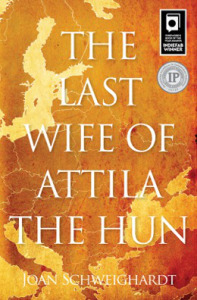 Q: How did you go about plotting your story? Or did you discover it as you worked on the book?

A: Since I was drawing on legend and history, the main plot points were there for the taking. But it was still no piece of cake. I had to fill in lots of gaps. Also, when I wrote the first draft it was in chronological order, which meant that the legendary stuff was for the most part in the first half of the book and the historical stuff was in the second. That didn’t work at all. I had to find a way to weave the legendary and historical stuff together, and that took several more drafts.

Q: Tell us something interesting about your protagonist and how you developed him or her. Did you do any character interviews or sketches prior to the actual writing?

A: I got my protagonist from the legendary material, not the historical. Very little is known about the “personality” of the last wife of Attila. We only know that at some point near the end of his life Attila married a Germanic woman. I identified this Germanic woman as the Gudrun from the legends. The legends provided elements for the motivation and the plot I would develop to get her from A to B to C, but they still left me short when it came to her personality, who she was as a woman. That just kind of developed over time as I worked on each draft. The story is written in first person, which helps a lot with character development.

Q: In the same light, how did you create your antagonist or villain? What steps did you take to make him or her realistic?

A: The history books I researched had all kinds of interesting information about Attila. The Huns and Germanic people didn’t write back then, so most of the stories about Attila came from Roman historians. But, as ruler of half the known world and a man who felt his calling was to take over the other half, Attila was a hot topic among Roman historians, and I got some really juicy tidbits about his behavior, his relationships with his sons, his relationships with his various wives, his beliefs, his superstitions and of course his battles. A lot of this information found its way into the book. Even if a reader doesn’t care for the legendary stuff, they will walk away knowing a heck of a lot about the true historic Attila.

Q: How did you keep your narrative exciting throughout the novel? Could you offer some practical, specific tips?

A: Unlike other novels, where I’ve had to really focus on plot, here I had to focus on what I should leave out of the plot so that the story would not become “congested.”

Q: Setting is also quite important and in many cases it becomes like a character itself. What tools of the trade did you use in your writing to bring the setting to life?

A: Again, a lot of it was there for me. There are descriptions of the great City of Attila in history books, so I was able to draw on that. The other main setting in the book is a rather dilapidated castle in a rural area of Europe in 450 a.d. I did research to figure out what life would be like in such a place, how people would bathe, how they would eat, what the inside of their dwellings would look like, etc.

Q: Did you know the theme(s) of your novel from the start or is this something you discovered after completing the first draft? Is this theme(s) recurrent in your other work?

A: I knew what themes were of interest to me when I started, but the great thing about fiction is that when you get done you see that there are other themes that worked their way in, things you didn’t really intend. The writer Susan Sontag once said she wrote to find out what she was thinking. I think this is what she was talking about.

Q: Where does craft end and art begin? Do you think editing can destroy the initial creative thrust of an author?

A: If I never edited my work it would all be garbage. I can’t speak for other people, but for me craft is essential. Also, I have a few friends who are not only wonderful writers but also very honest in their critiques. I ask them to read early drafts of my work. When you get caught up in the day to day of writing a novel, you can take a wrong turn or get sidetracked by a really boring subplot. My three favorite fellow writers are all really different in their approach to writing. So once they each give me feedback, I feel I have the best possible picture of the weaknesses in my work and I can go back to the drawing board assured that the next draft will be better.

Q: What three things, in your opinion, make a successful novelist?

A: I am always surprised by the number of writers who don’t want to go back and polish. Maybe some are geniuses and they don’t have to. But most writers will find that it is impossible to write a really good book without going back over it a number of times. During the first draft you may want to concern yourself mostly with plot. The next draft you may want to work more on character development. The next one you may want to just go through and make sure your characters motivations are clear and setting descriptions are solid. Sometimes in my work I make assumptions about motivation; I think because I know why a character is doing something other people will know too. This is one of those areas where the help of other writers/readers has been invaluable to me. So, the three things I believe most writers need to be successful are: draft one, draft two, draft three (and drafts four and five can’t

Q: A famous writer once wrote that being an author is like having to do homework for the rest of your life. What do you think about that?

A: Most people would agree that “homework” connotes a task that is given to you by someone other than yourself for the purpose of ascertaining that you’ve learned certain lessons. Writing a book, on the other hand, is a task you’ve generated for yourself, for the purpose of telling a story that is important to you for one reason or another.

Q: Are there any resources, books, workshops or sites about craft that you’ve found helpful during your writing career?

A: Again, what I’ve found most helpful is insights from fellow writers. These days there are all kind of websites that provide help to writers too. Savvy Authors is one of my favorites, but there are plenty of others. There’s no shortage of ideas out there about how to do anything, whether it’s writing a book or changing out a toilet.

Q:  Is there anything else you’d like to share with my readers about the craft of writing?

A: A lot of young writers who start out writing short stories with the hope that they will write longer works in the future get bogged down by the idea of taking on a huge project. I would like to say to them, Why not try your hand at writing a novel based on history or legend? Maybe you have a time period that interests you, and you can develop it and then tell a story on top of it, so to speak. Or maybe there is a historical character that you’d like to develop a setting around. Or maybe there is a myth or legend that you’d like to bring into modern times. Jane Smiley took the story of King Lear, which is of course best known as a Shakespearian play, and made it her own in her novel A Thousand Acres. What’s really interesting to me is that Shakespeare borrowed his King Lear from a Celtic legend, and the legend likely had some foundation in history.

The other thing I’d like to say is, These are hard times to be a writer. It’s very hard to get published, and even if you do get published, it’s very hard to spread the word about your book, unless you are published by one of a handful of big publishers with money to throw at your work or you have zillions of followers on social media. But there are many other reasons to write besides the remote possibility of making a lot of money. Every book is a journey; it is an opportunity to explore another world, as well as your own mind. Every book will change you in some way.
1 like · Like  •  0 comments  •  flag