So happy for Shoshana Rosenbaum and The Goblin Baby. This was a script I read last year for the DC Shorts Screenplay Competition – it was one of the finalists and had a live reading before an audience at the Atlas Theater.

Inspired by the DC Shorts experience, and with help from Women in Film and Video, Shoshana raised money through Indiegogo and made her movie, filming in the Palisades neighborhood of DC in the middle of our polar vortex winter.

This is what I love about DC Shorts – it nurtures filmmakers in Washington. You don’t need to be in Hollywood to make a film. With a little support, a little money and help from friends, you can make a short. We’re also lucky to have great local talent – several of the actors in The Goblin Baby also appeared in House of Cards. 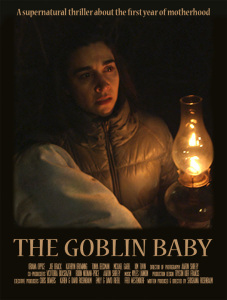 A mix of archetypal fears and modern anxiety, The Goblin Baby is like an update of one of those Grimm fairy tales far too terrifying for children anymore.

Over the years, I’ve read hundreds of scripts for DC Shorts. This is one of the few that stayed lodged in my brain. It’s spooky and works on an unconscious level, triggering age-old fears of darkness and abandonment. And with its smoky palette and things occurring just out of frame, the film captures the elemental dread that I enjoyed in the script.

Shoshana had a screening of her short film before a packed house at Ri Ra in Georgetown last night – they have a meeting room upstairs that was converted into a theater for friends and family. In addition to the baby crying on the screen, there was a baby crying in the back of the theater, which made the experience even spookier.

The Goblin Baby has been submitted to short film fests – good luck Shoshana!