An Idol Unto Yourself Baby's First Outing

7 Questions for the 2014 Pittsburgh Pirates Season


Despite a wildly successful 2013 campaign that treated Bucco Nation to the first winning season—and playoff appearance—in twenty years, questions still abound two weeks prior to Opening Day. The Pittsburgh Pirates seemed poised for a legitimate postseason push again this summer. But sometimes a can of corn turns out to be a bucket of shit, with the handles on the inside.

1.      Was the entire 2013 a “wag the dog” scenario?In other words, was the entire 2013 season staged? Were fans treated to a fake winning season to divert attention from owner Bob Nutting’s frugality, or the horrendous breakdowns in the second halves of both 2011 and 2012? Were spectators at PNC Park watching holograms of ball players, and wins scripted by writers? Was Root Sports telecasting a kind-of WWE event, or “sports entertainment”? Does Andrew McCutchen actually exist, or is he just the concocted protagonist in a sick fantasy conjured by the puppeteers in the luxury suites? Are these questions being asked facetiously? Sadly, no.
2.      Who will be the first baseman on Opening Day?Despite GM Neil Huntington not acquiring a bona fide first basemen in the offseason, the general consensus is that the team does, in fact, need a warm body to fill the position. Unfortunately, a platoon of an uninspiring Gaby Sanchez and pseudo-prospect Adam Lambo seems a lackluster solution. But still, a living, breathing human being should be in the general vicinity of the bag when the Bucs are in the field. Rumor has it that management is toying with the notion of cutting first base from the payroll altogether, and paying the batboy minimum wage to retrieve errant throws from the dugout. The notion would make Dick Groat roll in his grave, and Dick Groat aint’ even dead yet. Hey! Wait a minute…
3.      Will the defensive shift hurt or help the outfield?Jose Tabata has gained weight steadily since his rookie year. The right fielder has suggested to manager Clint Hurdle that the outfield should shift so dramatically to the left, regardless of the batter’s spray chart, that the new alignment would virtually position Tabata seven feet from the Nathan’s Hot Dog stand. Okay, the word “virtually” was typed in jest; Tabata will be housing weiner dogs rather than taking bad routes to fly balls.
4.      Will Burnett sign with the Pirates?This question is posed by the same people who think Obama wasn’t born in the US, or that the US government used remote control planes to crash into the Twin Towers, or that flash-in-the-pan pitcher Jeff Locke is ticketed for an All-Star career.  Face it people.  Burnett signed with the Philadelphia Phillies. His contract looks just as legit as Obama’s birth certificate, which means there is a 50-50 chance that Burnett has not signed with the Philadelphia Phillies.
5.      Will Pedro Alvarez strike out 2,794,704,087 times in 2014?That number seems high, but if you include spring season at-bats, I think we’re in the ballpark. 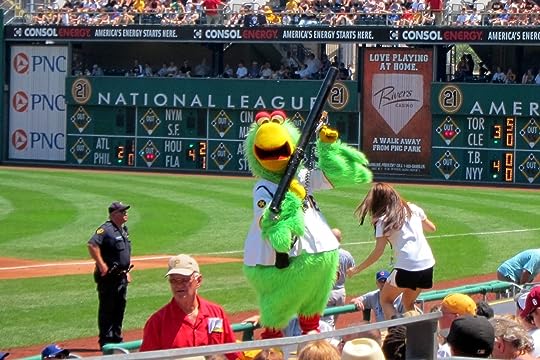 6.      Is the Pirate Parrot responsible for the recent string of heroine deaths in the Pittsburgh region?Connoisseurs of both baseball and opiates recall that the Pittsburgh drug trials of the 1980’s brought media attention and shame to several high-profile baseball players who were outed as drug abusers. Humorously enough, the Pirate Parrot was the pusherman. I’m not necessarily suggesting that the famed mascot has returned to his former illegal habits. However, the sharp uptick in heroine use on the streets combined with several eye witness accounts of a white powdery substance on the Parrot’s beak, a TMZ video of the Parrot sunbathing with 15 scantily-clad Swiss models on his newly purchased schooner, and the recent announcement that the popular hotdog gun has been re-titled the smack gun—which the Parrot will use to fire several ounces of “pure” to lucky fans during the 3rd inning break—really makes you wonder.
7.      Will the Pirates have another winning season?If by “winning” you mean having scored more runs than the opposing team at the conclusion of 9 innings of play, and by “season” you mean season, then yes, the 2014 Pirates are playoff bound again. Let's Go Bucs!
View more on Matt Bower's website »
Like  •  0 comments  •  flag