My little boy turns 1 year old today. This is what I wrote on Feb. 27, 2013 in the hours after he was born. Just something to introduce him to our friends. For his birthday, I thought I'd share it again: The story of his unusual name ... 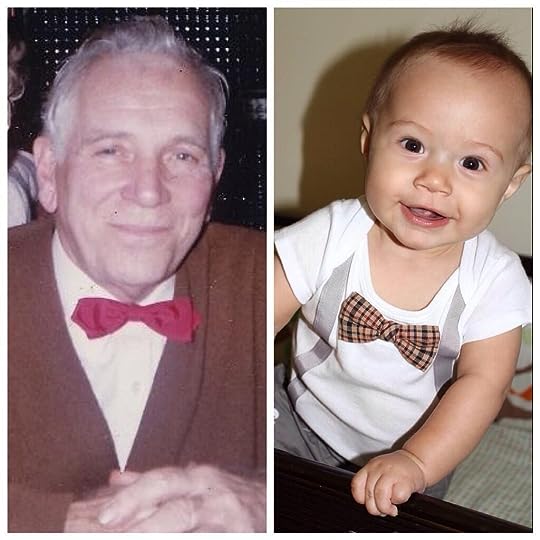 For a very brief moment today, this little fellow held the record as the Earth’s youngest inhabitant – our newborn son, Prosper Joseph.

He arrived at 10:43 this morning, weighs 7 pounds and 14 ounces (3 ounces shy of his big sister’s record), and is very hungry. Jill is worn out, as you might expect, but remains tough and beautiful as can be. The baby arrived a little earlier than we thought, but that’s okay. We were eager to meet him.

His name may sound newfangled, but it’s actually a very old one. He’ll probably be asked about it a lot, so it’s good that he’ll have a story behind its origin.

As Jill and I prepared for life with another kiddo, we found ourselves thinking often of the people we love who are gone, and won’t get to meet him. When we had our little girl, we decided to name her Audrey after Jill’s aunt, who – like Jill and her sister Kelli – was a childhood heart patient. Unlike Jill and Kelli, that earlier Audrey lost her struggle when she was just a toddler. By carrying her name, we hoped our Audrey would also carry some of that lost little girl’s lively spirit.

We wanted our son’s name to be just as meaningful. We went toward my side of the family this time, and decided to call him after my grandfather -- Prosper Hubert Frerotte, one of the people I loved most in this world. Pap was a house painter and wallpaper hanger, but his true profession was storyteller.

When I was 4 or 5, he taught me to tie shoes by letting me practice on his big work boots. When I was 10, he taught me how to sweep a broom so I didn’t just create big clouds of dust. When I was teenager, we spent summers staining porches, patching drywall, and laying down coats of primer and high gloss on the homes of Western Pennsylvania. In each case, what he really taught me was to keep pushing even when it got hard, admit when I made a mistake, so it would be easier to fix, and try to do a little better each time.

Since he hauled around paint and other messy and caustic materials, Pap’s work vans tended to be beaten-up, barely-functioning jalopies. One had a broken ignition, and to start it he’d have to open the hood and bypass the electrical system with a metal coat hanger. Sparks flew as the engine would roar to life, and after witnessing this a few times, I asked him if it hurt when he did that. “Nah,” he said, tossing the coat hanger in the back seat. “If it did, I’d make YOU do it.”

I’m hoping that sons – as with grandsons – can be similarly useful.

Sometimes Pap and I got on each others nerves, usually because I messed up something – painting over a customer’s expensive brass hinges, or sealing a set of windows shut. But Pap wasn’t beyond fault. One time, I had to cancel a trip with with friends because he’d spent so much time b.s.-ing with the homeowner (an old pal of his) that we had to come back on a Saturday to finish the job. I was pissed, and he gave me hell right back. It was a long day of bickering, but on the ride home he was the first to attempt peace. “You want to stop over at the ice cream place?” he asked. I stared out the window, holding the grudge. I told him to keep driving.

There’s not much you can do about those mistakes. All you can do is remember them, and hope to not repeat them. I’ll think of that a lot as we raise this new Prosper, especially on those days when he tells Jill or I to just keep driving.

Pap had a great memory and a natural talent for telling tales. He knew how to build suspense and land a joke. They say great stories happen to those who know how to tell them. Being a house painter, I always suspected he also knew how to add a coat of varnish to his yarns, but as I got older, and long after he was gone, I discovered that even some of his most incredible stories were absolutely true. He lived a good life, and paid attention to the people in it. I hope our new son does the same.

Our boy may have to deal with an occasional Star Trek joke, but hey, kid – at least we didn’t saddle you with “Hubert,” too.

The middle name “Joseph” has many origins: it was also the middle name of Jill’s late brother, Grant, the first name of her own grandfather, Joe Piontek, and the name of the high school where she and I first met. The primary namesake, however, is my uncle, Joe Breznican -- another guy who was (and remains) very special in both of our lives. He was one of the first truly creative people I knew. A real-life writer, guitar player and film lover who was well-read and thoughtful. He bought me short story collections and urged me to write my own little tales. Without his encouragement and support I may never have pursued that longshot dream of becoming a writer.

If I'm ever in doubt (which is often) or need a pat on the back, I can always count on him for a confidence boost. "Check out what my nephew's been up to," he once told a co-worker, showing her a newspaper profile I'd written about an actor. The woman's jaw dropped, beyond impressed. "Your nephew is JOHNNY DEPP?!" she said.

I'm hoping he can steer some of that stalwart sincerity and goodwill Prosper's way, too. Every non-Johnny Depp needs an Uncle Joe.

The main trait he and Pap shared is that they went out of their way to help people, to be friends to those who had none, even when it wasn’t easy. There are plenty of people beyond me who could attest to that. Both of them are great role models not because they’re perfect, but because they worked hard to be good.

It’s rare to visit the hospital for a happy occasion. Next week, it will be 17 years since I walked into an emergency room in Western Pennsylvania and saw Pap, still wearing his Jackson Pollock-style white overalls, lying lifeless on a gurney. He'd gone to a painting job that morning, and even though I was around and available -- it was spring break, and I was home from college – he didn't even tell me about it. He told my grandma he wanted me to enjoy vacation, so he went off alone. At some point shortly after carrying his supplies into the house, he dropped to his knees, took three deep gasps, and collapsed from a massive heart attack.

My mom, grandmother, Uncle Jeff, and I rushed to the hospital, but he was already gone. I remember sitting beside his body, still warm, and brushing my fingers through his thin white hair, thinking of all the great stories he lived. But there would be no more.

Today, Jill and I sat in a different hospital, saying hello instead of goodbye. I ran my hands through the thin hair of a different Prosper – this one with a lifetime of stories ahead.

I loved this last year, I love it again this year. Happy birthday little man!!!

I love this!! Miss you Uncle Burt (Prosper) Happy Birthday Prosper.. you definately have some shoes to fill buddy! May God always bless you and shine his face upon you!

Anthony Breznican isn't a Goodreads Author (yet), but he does have a blog, so here are some recent posts imported from his feed.