20 Leadership Quotes that Grabbed My Attention

Recently, Dr. Rainer included his list of “Top 25 Leadership Quotes” on this site. That list made me think about my reading on leadership over the past several years.

As I read a book, I note on the inside cover any significant statements that catch my attention – and this blog is a compilation of some of those “inside cover” quotes about leadership. My including these quotes is by no means a validation of all of these books, but I hope the quotes themselves challenge you.

“We have to recognize that however smart we are, we’re not smarter than everyone else combined. . . .  We can’t lose sight of the fact that no matter how important our own contributions are, we couldn’t have gotten anywhere without the help and hard work of lots of other people.” — Kouzes and Posner, A Leader’s Legacy
“Only make promises you intend to keep.”  —  Harvard Business Essentials, Creating Teams with an Edge
“And to spread trust and positive energy throughout the organization, we must communicate, communicate, communicate.”  —  Gordon, The No Complaining Rule
“The first rule for the concentration of executive efforts is to slough off the past that has ceased to be productive. . . . it is the executive’s specific job . . . to commit today’s resources to the future.”  —  Drucker, The Effective Executive
“The meeting starts on time, with or without you.”  —  Guttman, Great Business Teams
“What takes 10 emails to negotiate or clarify can often be communicated in a three-minute phone conversation. Pick up the phone or walk down the hall to the next cubicle occasionally.”  —  Booher, The Voice of Authority
“Don’t sacrifice your health by taking on too much.”  —  Keller, with Papasan, The ONE Thing
“Establishing priorities is not the same thing as binding yourself to them. . . . To spend more time on our core priorities (which, surely, is our goal!) necessarily means spending less time on other things.”  —  Heath and Heath, Decisive
“Leaders take words seriously because we live and die by them.” — Mohler, The Conviction to Lead
“One common behavior of late Stage 3 [in the process of a company’s decline] is when those in power blame other people or external factors— or otherwise explain away the data— rather than confront the frightening reality that the enterprise may be in serious trouble.”  —  Collins, How the Mighty Fall
“Nobody wants to follow a selfish person.”  —  Thrall, McNicol, McElrath, The Ascent of a Leader
“The best leaders are those who are filled with a fire-in-the-belly enthusiasm for what they do.”  —  Krames, Jack Welch and the 4E’s of Leadership
”There’s no point in taking a situation that’s already complicated and piling your complications on top of that. No point, no benefit, and no future.”  —  Webber, Rules of Thumb
“The leader must be a man who, while welcoming the friendship and support of all who can offer it, has sufficient inner resources to stand alone, even in the face of fierce opposition, in the discharge of his responsibilities.” — Sanders, Spiritual Leadership
“People tend to look at their businesses from the inside out – that is, they get so focused on making and selling their products that they lose awareness of the needs and buying behaviors of their customers.”  —  Bossidy and Charan, Execution
“Don’t pretend.” — Stanley, The Next Generation Leader
“Remember that everyone deserves some fun during working hours.”  —  Heller, Managing Teams
“Being generous is the hallmark of people who live successful lives and operate business with soul. If your exclusive reason for operating your business is personal gain, you will find yourself empty because you are shallow.”  —  Ramsey, EntreLeadership
“Communicating appreciation and encouragement to one’s fellow workers is a powerful tool in influencing your organization positively—regardless of your position within the system.”  —  Chapman and White, The 5 Languages of Appreciation in the Workplace
“If you’re a leader, people’s lives should be better because of the influence you’ve had along the way.”  —  Dungy, The Mentor Leader

Which of these quotes most grabs your attention? What other quotes would you add to the list? 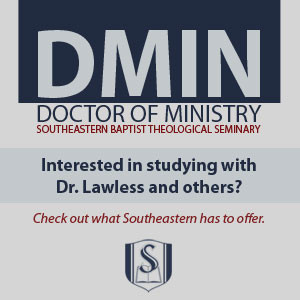 Chuck Lawless currently serves as Professor of Evangelism and Missions and Dean of Graduate Studies at Southeastern Seminary.

Thom S. Rainer isn't a Goodreads Author (yet), but he does have a blog, so here are some recent posts imported from his feed.