Today, we're meeting Diana Catt, author of "The Art of the Game", the opening story in Hoosier Hoops and Hijinks . Hoosier Hoops is the newest anthology to be published by the Speed City Indiana chapter of Sisters in Crime, and focuses on one of Indiana's most popular pastimes: basketball. I asked her about her story, writing, and reading habits.

Q: How did you come up with the idea for "The Art of the Game"? 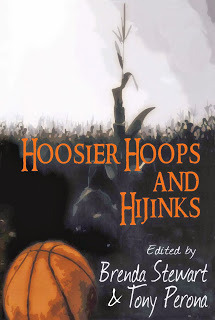 Published by Blue River Press.A: When I sat down to write a story with a basketball theme, I knew I was competing with many talented Indiana authors who were also writing to the basketball theme and I wanted a story line that would be unique.  I decided I would try focusing on a basketball fan. But a normal fan wouldn’t do, I needed a creepy, obsessed fan, right?  And I wanted to illustrate how the player was happily going along with her life and had no idea this fan had focused on her.  That’s the creepy part to me - that someone could be out there with a distorted view of reality and no one knows.  Of course, problems come when the two cross paths.
I set the story at Purdue because when I was my daughter’s little league coach I took the girls to a women’s game at Mackey Arena for some exciting and intense basketball.
The art portion of the story?  That just popped into my head.

Q: When did you know you wanted to become a writer?
A: I’ve been an avid mystery and sci-fi reader since 3rd grade when I discovered Nancy Drew and later Isaac Asimov.  But at that time I didn’t want to write mysteries, I wanted to be Nancy Drew.  Ultimately, I discovered I’m not nearly brave enough.  So I became a scientist.  About twenty years ago, I attended a seminar where the speaker described the first successful cloning of mice and I was inspired to write a sci-fi novel.  I had so much fun with it and I’ve been writing in my spare time ever since.

Q: Who is your favorite author (or current fave) and what really strikes you about their work?
A:  I like a wide variety of authors and genres.  There’s no one favorite, but some authors I’m always sure I’ll enjoy include: Tami Hoag’s thriller/suspense, Tony Hillerman’s Navajo mysteries, Dean Koontz’s scary stuff, Zoe Sharp’s mystery/thriller and J.A. Jance’s mystery/horror.  Right now, I have new releases by other favorite authors in a pile waiting to be read: William Kent Krueger, Terence Faherty, Hank Phillippi Ryan, just to name a few.   I want good character development, an interesting setting, and suspense that keeps me turning the page late into the night.