The Truth Beyond the Sky - Andrew M Crusoe 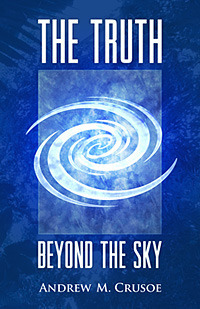 I first read The Secret Beneath the Ice and was intrigued by it. There were some new author rough edges that I am sure I myself commit but the style showed promise and connected with how I like my books, fast and right into the action, not handing out the answers in a deluge but dripping them where appropriate, keeping my attention and entertaining at the same time. In that light, I picked up and read The Truth Beyond the Sky.

At first I was a little disappointed, The Secret Beneath the Ice left off on a cliff hanger and I thought I’d be getting right in there. Instead the pacing changed to very much to “this is the beginning of the story now”, and it all slowed right down to something that didn’t jibe for me, wasn’t exactly my cup of tea; Zahn was a little whinny with his momma issues, seemed uncertain of himself, and so on. In summary, he wasn’t me nor who I want to be.

Never-the-less, I continued to read and about a third in (perhaps less), I was rewarded. We were finally skipping though space again, travelling through Stargate like gates in space, sitting in a “living” spaceship, visiting strange planets that weren’t what they appeared to be and so on. Zahn still annoyed me, but I liked the other characters and the pace.

And then finally we came to the end third and the author seemed to get into this element more, or maybe he got into mine, a mute point really. What mattered was we had the style back that I had been expecting all along, that of The Secret Beneath the Ice. The bad guys were nasty and believable, Zahn “manned up” and he could be me and I could be him and the story moved. The ending? Yep, its in for a second book. But it at least ended the story it was telling and I knew the sequel bit was going to be there, so I don’t mind so much.

Will I read the next in the series? If the style remains the same as the last third, then for sure my answer is yes. And in my eyes, that is the test of “was this a good book?”. Four Stars.