YOU are at the center of The Conversa... STUDY: Social Business Strategy – Vis... 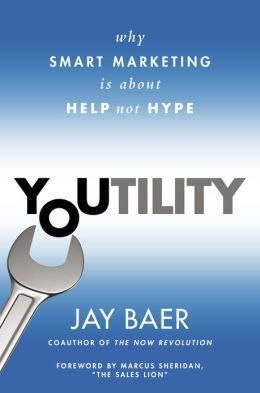 Guest Post by Jay Baer, a hype-free social media and content strategist & speaker, and author of Youtility: Why Smart Marketing is About Help not Hype. Jay is the founder of http://convinceandconvert.com and host of the Social Pros podcast.

One of the most interesting dynamics of the recent huge shifts in consumer behavior is that we need more information, but far fewer transactions involve face-to-face interactions with other people. This truly is the era of self-serve information.

How many times have you purposefully chosen to not fill out a contact form on a website because you didn’t want to be called, or even emailed? I’ll bet more than a few times. Even if it’s a product in which you have a genuine interest, you’ll avoid filling out that form until the last possible moment, preferring instead to kick the informational tires yourself.

”Smartphone” is a misnomer. We’re not using them to make phone calls. A decade ago I easily received 20 or more calls per day. Now, it’s three or four. Instead, I have a menagerie of inboxes, with asynchronous messages streamed to me from email, Facebook, Twitter, Linkedin, Pinterest, Instagram, my blog and text messages, as well as notifications from topic-specific websites like TripAdvisor.com. No wonder we want our information to be self-serve. We just want to be left alone!

Usage data proves this point. From 2009 to 2011 American females’ use of voice minutes on mobile phones decreased by 12%. During the same period their text messages sent and received increased by 35%. For men, it increased 44%. 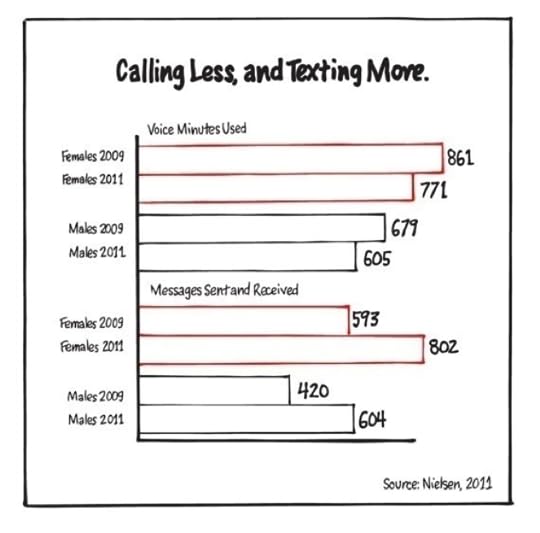 And, if middle-aged men like me are going the passive-aggressive, self-serve route, imagine the behavior pattern of tomorrow’s dominant consumer cohorts? As chronicled on this blog by Brian Solis, new media pundit and author of What’s the Future of Business?, Sitel and TNS released research in 2012 that determined that 71% of U.K. residents between the ages of 16 and 24 will search for a solution online before contacting a company directly.

Generational marketing consultant Kelly McDonald, author of How to Market to People Not Like You, believes the impact of mobile Internet is, if anything, being underreported because of the propensity to use average figures to explain the trend. Averages include the mobile Internet usage of people who may never fully embrace it, such as her mother.

“My mom is 76,” McDonald says. “It’s not that she’s a technophobe, but she’s never going to be as comfortable with technology as someone who has not had to adapt to it, who has had it all their lives. Before the Internet, the greatest invention was electricity, but I grew up with it, so I don’t appreciate it. I flip the lights on, and they come on. But there was a time when electricity was amazing and awe-inspiring, and it made everything more efficient. So in the same way that our generation takes electricity for granted, younger people today take the Internet for granted, and because they grew up with it, they have no reason to not trust the information they find there. But my mom does not trust it. She doesn’t know if her mobile deposit ‘went through.’ She’d rather go to the branch and see them in-person.”

Death of the Salesmen

We used to talk to a real person as a first step. To get familiar with the company. To learn more. To create bonds. Not now. Now we talk to a real person as a last resort when we’ve exhausted the supply of Zero Moments of Truth (in the parlance of Google’s book by the same name that Brian also discussed in WTF) and have a query so specific only a human being can answer it.

This is most egregiously true in a category where the transactional stakes are often the highest: business to business marketing. In 2011 the Corporate Executive Board surveyed 1,900 B2B customers to uncover insights about purchasing behavior and found that customers will contact a sales rep only after independently completing 60% of the purchasing decision process. Sixty percent of the decision is made before the prospect identifies himself. Sixty percent of the decision is made before a call, or an email, or an entry into your lead tracking database. Customers are ninjas now. They are stealthily evaluating you right under your nose.

This has manifest consequences on the role of salespeople, whose job used to be to develop and nurture relationships. No longer. The role of the salesperson is now to answer specific questions capably and quickly, and to close deals that became possible due to the self-serve research performed by the customer. What does that 60% figure mean for marketers? A lot, according to the Corporate Executive Board’s Ana Lapter.

“The 60% mark is in that part of the mid-funnel that is critical in terms of driving the buyers’ consideration of a supplier for a potential purchase,” Lapter says. “Therefore, marketing needs to de-emphasize tasks like thought leadership and white papers, and focus more on advanced activities, such as diagnosing purchasing needs and identifying internal barriers to purchase.”

Marketing needs less top of mind awareness and more Youtility. Sounds about right to me.

Youtility: Why Smart Marketing is About Help not Hype – Exclusive Free Excerpt from Jay Baer