My Poem's a Finalist in the Goodreads... "Discovery of Roentgen Rays" 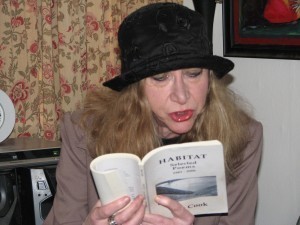 Joie Cook was a San Francisco performance poet and a friendly acquaintance of mine. I heard her read a few times and had one glorious dinner with her, her husband David, and a few old beaux of hers, during which we polished off an entire pitcher each of margaritas and mojitos. We staggered onto the street arm in arm, pledging eternal love, mad admiration, etc., and never saw each other again.

Joie died Sunday night at her Oscars-watching party. Among those with her were her husband David and her friend and former love Richard Stone. Ill with complications of hepatitis C, Joie had made herself DNR (Do Not Resuscitate), so 911 was not called. Within an hour, her daughter Jessika arrived to be with her mother's body and take her place among the bereaved.

Here are some links to poems of Joie's:
http://rustytruck.wordpress.com/categ...
http://www.sfheart.com/sfpoets/joie_c...

Here's a poem I wrote for Joie a few years ago. It first appeared in The Eloquent Atheist.

She’s eating hummingbird hearts
for appetizers, drinking the Salton Sea
for a cocktail. She’s doctor bitch to you,
matey, so look seaworthy.
Inch-long nails, vinyl skin, elbow hicky,
teased hair with a dyed pink streak.
She’ll take that plunging neckline,
let the girls out to say hello.
She’s thinner than a flimsy excuse,
frailer than tornadoes,
richer than creosote,
inimitable, indescribable, delicious.
I’d give my supernumerary nipple
for a taste of that. She makes us rise
like bread, a fish belly-up, the sun.
3 likes · Like  •  0 comments  •  flag