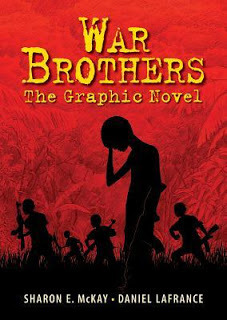 This graphic novel, that comes out on February 26, is one of those special books that act like a punch-in-the-stomach when it comes to the story that they have to say. And the story at hand is one of war and hatred, ignorance and blind belief, hurt and retribution. There’s so much agony, and so much pain contained in these pages, that can make a tender or simply human soul feel sick.

The subject matter of War Brothers is bleak, as it tackles one of the most important issues of our so-called modern era: child soldiers. As we read, at the moment, there are more than 250,000 of them, fighting and dying in 35 countries around the world, a number that could be far larger, since the cases of children that go missing and end up with arms in hands is not actually too well documented.

Anyway, to come to the story, this book describes the adventures of Jacob Kitino, a member of the Acholi tribe and resident of the city of Gulu in Uganda. Jacob, who comes from a rich family, studies at the local seminary for boys and just loves to play football. The civil war that ravages his country is very distant to him, a reality that only the other people have to live through. His best friend is Tony, a boy with a great sense of humor, who loves football as well. Let’s read what he has to say: “The nuns who are paying for my schooling told me that if I fail it is because I am an ungrateful boy. But if I pass it is God’s work and I should repay God by becoming a priest.”

Becoming a priest is not something he really wants to do, but he doesn’t want to be a soldier either. However, fate has already made its plans for him, as well as for many other the boys, as one day the Lord’s Resistance Army rebels attack the school, and take 38 of them as hostages. They are to become soldiers, or die, unless they can be used otherwise.

So Jacob and Tony, all of a sudden, find themselves marching through the jungle towards a yet unknown destination. The journey is long, and exhausting, their strength, as they are practically famished, seems to slip away from them by the day: “I need to rest, but to rest is to die,” Jacob says.

This long and tiresome journey will change their lives forever, and not for the better. They’ll see heinous crimes committed in the names of country and god, they’ll make friends and create enemies, and they’ll see that their future is something they have to shape themselves. What they don’t know yet is that victims and perpetrators, when it comes to situations like these, are treated by the people in almost the same way; a veil of doubt and suspicion covers them both.

War Brothers is a disturbing story told in a deeply humane manner. The words and the illustrations convey convincingly to the reader all the thoughts and emotions of the main characters, and they bring to life their dreams and fears, their resolutions and failures. I’d highly recommend this exceptionally good graphic novel to simply everyone who gives a dime about the world around him.