A reading from Escape Velocity Sneak preview of Dust & Water

The making of the Escape Velocity trailer 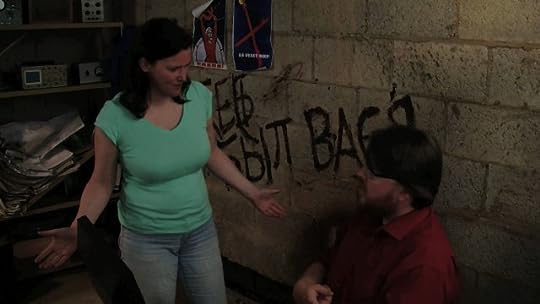 I'm a member of an amateur film-making club, and earlier this year I decided to call on their skills to help me make a live-action trailer for Escape Velocity. (If you haven't already seen it, go here to have a look.) A lot of indie book trailers look like animated Powerpoint presentations, with the text of the blurb rolling over stock photos (or stock video if you're lucky), but I wanted to do something a bit more ambitious.

Initially I thought I'd make something like a movie trailer, with rapid cutting of clips of all the exciting bits. I soon realised that would take too long and cost too much, so I decided to film one scene that gives a flavour of what the book is about. (The middle of chapter 20, if you want to compare it with the book.) It would use as few actors and as few locations as possible, and so could be shot in a couple of days. From thinking "I'd like to make a trailer" to having it on YouTube took about six months, which is breakneck speed by amateur standards - or at least by this amateur's standards.

I wrote a script that distilled the scene to its essence. (A copy is here - 116K PDF.) It started at about twice the length it is here - there's a lot of stuff in it that deals with consequences of earlier scenes, or makes promises that pay off in later scenes, but which isn't meaningful or necessary if I'm just trying to get you to read the book.

I shot the news report first, using members of the club to play the parts of the newsreader and William Norris. We filmed the newsreader against a green screen, to let me put the background of the London Eye in later. 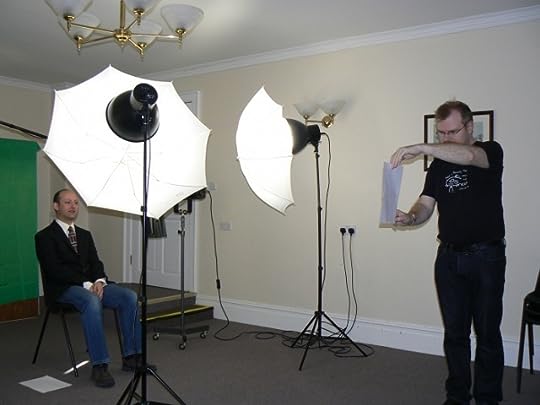 (Filming the newsreader with a very low-budget autocue.)

I recruited the actors who play Sam and Jennie Grainger from a local amateur dramatic society. Only one person was interested in each part, which could've been awkward had they proven unsuitable. Fortunately, Matt and Jo were (are) both good actors, who were professional in their attitude and patient with the seemingly-endless delays in finding a day when everything and everybody was available for filming. I didn't have to direct them much - just as well, as I'm not a particularly gifted director. I told them about the overall plot of the book and their characters' personalities and motivations, and let them figure out how they wanted to play their parts. The only instruction I had to give them was not to over-emote - they're used to theatre acting, so I had to remind them that the audience is three feet away, not three hundred.

The delays in filming did give me the opportunity to think about the script some more. The ending was a bit limp, so I replaced it with part of a later scene.

For the set, we used the basement of a club member's house. It was under construction at the time, so he didn't mind having graffiti in Russian on the walls - a puzzle for future archaeologists! For weeks, I kept the wrapper of every takeaway I ate, to have plenty of rubbish to put in the bin - which of course you can't see in most of the shots... 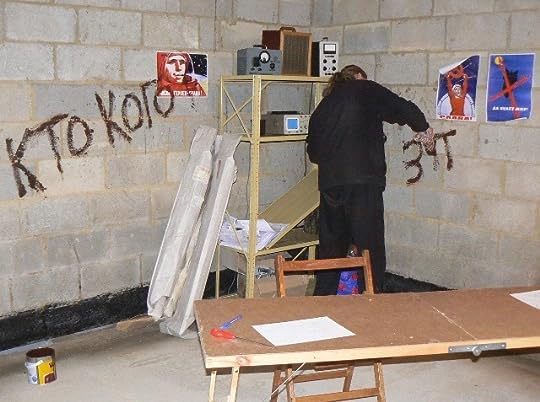 (Painting Russian graffiti on the set.)

I drew a storyboard to try to make sure I'd get all the shots I needed, but ended up treating that more as a suggestion than a blueprint. We filmed the whole scene from all the angles we thought we'd need, which turned out to be easier than just filming what I thought would be used from each angle. The actors don't move much or interact much with the props, so there was little continuity to worry about.

We put the camera on a dolly (wheeled platform) and track. You see these used all the time on professional shoots, but amateurs seldom bother with them, as they're difficult to use properly. Ben, our director of photography, had worked with them a lot. (Hardly surprising, really, given that he's worked in film and TV for years.) So almost every shot in the film has some camera movement in it, even if it's only a few inches, which helps to lift the production above the typical amateur level. 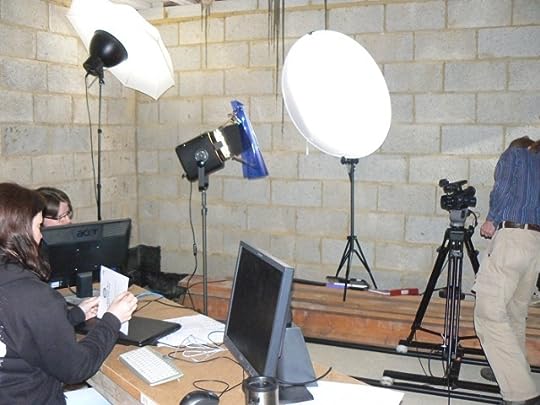 (Checking white balance before recording a shot - what human eyes see as white, the camera might not, depending on the lighting.)

At the end of the shoot, Ben then volunteered to edit the film. Seeing as his professional work is mostly in editing, I jumped at the offer. We ran into all sorts of technical difficulties, mostly because of the fact that the files that came out of the camera weren't compatible with Final Cut Pro, but we got there in the end. Ben also graded the film (adjusted the brightness, contrast and colour) to compensate for its being a bit underexposed and also for the fact that Matt tended to be upstaged by his very red shirt. 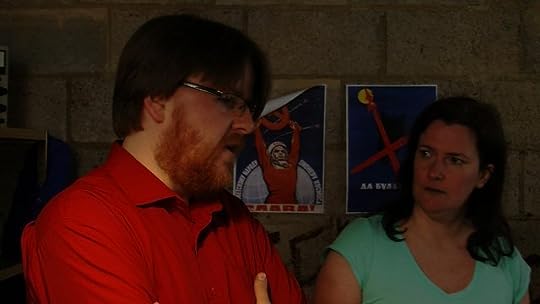 (Before grading, as it came out of the camera.) 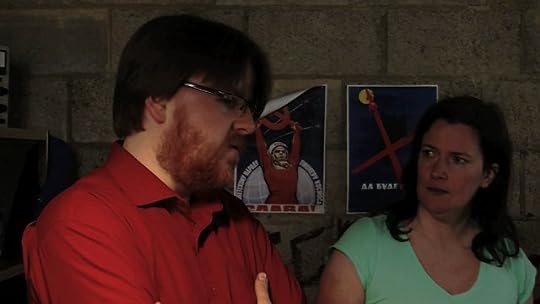 (After grading. Note the weaker red in Matt's shirt and Jo's skin, and the slight increase in overall brightness.)

Ben tinkered with the sound a lot to balance the volume of the dialogue, which varied between shots. This was partly because the actors were louder in some takes than others, but mostly because in wide shots, you can't get the microphone as near to the actors as you can in a close-up. I insisted that he replace the sound of Jo typing on the keyboard at the start with a louder and more clattery one. Most keyboards are fairly quiet nowadays, but I think this is one of those situations where audiences think they know what something is supposed to sound like, and think it's wrong if it doesn't sound like that. (Consider the "shing" sound you hear when someone draws a sword in a fantasy film. That's metal scraping over metal. You keep a sword in a metal container, it's going to be blunt before long...)

We entered the film into a local amateur competition, where it came second out of thirteen. We'd hoped it would win, but that was still a pretty good result.

Everybody gave their time and expertise free (meaning I now owe a lot of favours), and we had a lot of fun making something I think we can be justly proud of.
Like  •  0 comments  •  flag