How to do a Book Review Request (and ... Shaun Tan’s The Arrival: Best Non-Tex... 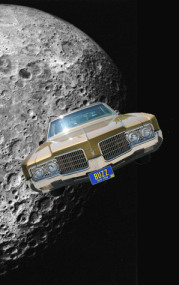 Anyone who has read Buzz by Robert Zverina probably wonders the same thing.

“Houston, we have a problem. Why isn’t this book under a big publisher?”

Orbiting the moon landing of the U.S. Apollo 11 in 1969, Buzz tells the ordinary tale of Buzz Polstar, the son of Czech political refugees, and his time growing up in Long Island. Buzz showcases Polstar’s nostalgic childhood in the 1960’s, his mundane college career, and his apathetic adulthood.

What makes this book a brilliant read is the witty yet reflective narrative voice of Robert Zverina. Calm and collective with a trace of humor, Zverina delivers an easy, relative read for people looking for a break from the extraordinary. His stream of consciousness throughout the book pounces back and forth between the present and the past, giving few clues to the future. Though Zverina has a unique style, Buzz is imbued with John Fante’s somewhat-sober optimism and Charles Bukowski’s poetic play on words, minus the perversion.

Although Polstar is a great main character, his life’s story is common compared to his family’s history. Polstar’s stepfather, mother, and father escaped the Czech Republic under political pressure, landing in the U.S. as political refugees. Even Buzz’s birth during the moon landing was remarkably climatic over Buzz’s unexciting life. However dull Buzz’s life seems in the book, it’s easy for readers to see themselves in his life. If readers are looking for a less-whiny, contemporary version of Catcher in the Rye starring a regular person with a realistic perspective on a New Yorker’s life, Zverina’s Buzz is it.

In spite of being an indie author, Zverina is light-years away from the average indie author—and it probably comes from his well-rounded background. He holds a Bachelor’s degree in English from Cornell University and a Masters of Fine Arts in Poetry from Brooklyn College, CUNY. Even if anyone subtracted his educational background, Zverina has another trick up his space suit sleeve: he was mentored under the late Allen Ginsberg, one of the leading figures of the 1950’s Beat Generation. The anti-materialism, anti-conformism, and pro-drug theme—remnants of the post-World War II writers—shines through Buzz like a satellite in the middle of space.

Like its name, Buzz should be buzzed up by all readers needing a small step away from the mediocre in indie books.

Does this book fit into magical realism? There are some scenes that are told in reality, but they have a magical, inhumane element that changes the meaning (and the seriousness) of the scene. However, I still think Buzz is closer to a slice-of-life drama than magical realism.