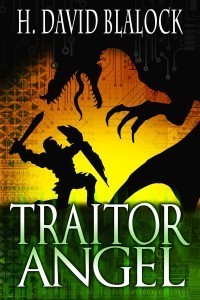 As part of the festivities David agreed to be harassed by me answer some questions regarding himself and his writing. Here is the result!

Hi David! Thanks very much for your time. To start off could you tell us a little about yourself? What’s one thing few people know or would expect about you?

Thanks for having me. I write stuff. From non-fiction to fiction, but preferably speculative fiction. Flights of fancy. Ridiculous tales. Nightmare imaginings. All fascinating stuff to me and things I love to share with others.

So, Traitor Angel is the second book in the Angelkiller Triad. Can you give us a quick rundown on the series?

The Angelkiller stories are based on the concept that, in the war between the Good and Evil Angels, evil won. That's why bad things happen to good people, why we still have disease and hunger and war. Luckily, though, the Light did not give up. For centuries the forces of Light, forbidden to interfere directly in the affairs of men, have worked through an elite force of human agents called The Army to reclaim mankind.

Endowing their conscripts with longevity and the ability to ward themselves against the most common influences of The Enemy, the forces of Light have pushed the Great Conflict almost to its limit. Jonah Mason, the main character in the series, started out as a Roman soldier but became a recruit, then a regular, then an officer in The Army. Those who have fought for more than a thousand years in the Great Conflict are called Angelkillers, and Jonah Mason has been called so more than a millennium.

The series follows Mason's company as they work to destroy the great corporate machine of one of The Enemy's most important entities, Dorian Azrael. They believe they are only waging war against a single Minion, but their allies the Knights know their struggle's influence reaches much, much further.

Like most books from Seventh Star Press, Traitor Angel has a number of illustrations dotted throughout, in this case by artist Matthew Perry. How does it feel seeing another artist’s interpretation of your work in the flesh? Do you get any input into which scenes to illustrate?

I work closely with Matt when he is generating the illustrations, but Matt Perry's work has never failed to go far beyond my expectations. It is exciting to see the events depicted in the book translated to such compelling images. I can't speak highly enough of his work.

Mixing religious elements with speculative fiction is always a bit of a risk. I find it can be highly effective if done right but spectacularly awful when it fails. What do you think makes it work when it does. What inspired you to tackle this topic? Do you have any advice for writers considering taking up the challenge?

Many people shun religion because they fear it. However, religion is as much of the human experience as anything else. We need to come to recognize it for what it is, a way of looking at life that touches something deeply embedded in our psyches. Writing religious elements can make a piece very powerful because of that. I wanted to present a possible explanation to the heart-rending questions each of us faces in our lives: sickness, hunger, death. I believe I have done so, and hopefully given an alternative to that answer that we can strive toward. If a writer wants to include religious elements, I suggest they approach it with respect and sobriety. 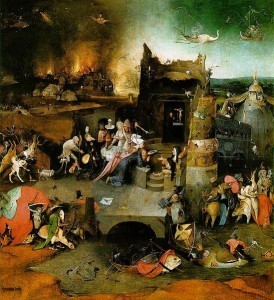 The book trailer for the first book in the triad features a number of different paintings depicting the battle between the forces of good and evil. Do you ever use such art as inspiration? Do you have a favourite painting with this theme?

Although I didn't use the art as inspiration, I do have a favorite. "The Temptation of St. Anthony" by Hieronymus Bosch is a disturbing but inspiring piece. Besides being a signature piece of the medieval and Renaissance periods' take on religion, its detail and colors typify the feel I wanted to instill in the story arc of the Angelkiller Triad.

You have been published in various places for a number of years now. Is there any particular piece of writing you consider your best? Any idea what we can expect from you in the future?

I enjoy the Angelkiller Triad, but novels are not my strength. I greatly enjoy short stories and feel my best work runs from 1000 to 7500 words. My stories "Evidence of the Eternal" and "To Our Brothers" are two of my favorites, although they are not well known. I do have quite a few stories on the cusp of publication, including a steampunk tale for one publisher and a story about a serial killer for another.

What book/s are you currently reading?

I am currently re-reading "Science Fiction of the '30s" edited by Damon Knight. Recently I started writing stories for a New Pulp publisher and have re-discovered my childhood fascination with pulp fiction. Such fun.

Is there a question you’ve always wanted to be asked in an interview but haven’t? If so, what is it and what is the answer?

I guess that would be "If you could win the lottery, how much and where would you spend it?" My answer: If I did, it would have to be for more than a billion because I'm such a skinflint I wouldn't buy a ticket before that, and I would spend it anywhere I wanted.

Thanks very much for your time David!

Thank you again for giving me that chance to connect with your readers. Happy 2013! 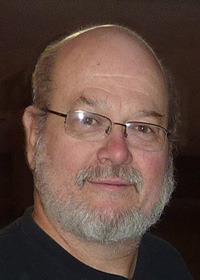 
H. David Blalock has been a writer for print and the internet in speculative fiction for more than 35 years. Inspired by the science fiction and horror writers of the early and middle 20th century, he continues to try to bring that sense of wonder and awe he felt at that reading to his audience through his stories and novels. For more information about David and his work, check out his website at ThranKeep.com

For more information about David and his work, excerpts and giveaways be sure to check out the rest of the Traitor Angel Blog Tour and the Seventh Star Press website.