NEW RELEASEMurder At The Beaufort Ph... 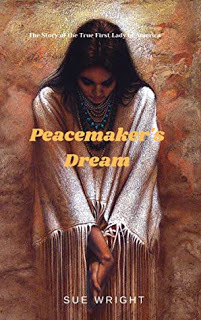 Set in the 17th century, Peacemaker’s Dream is the story of Pocahontas, a Native American woman and daughter of Powhatan, Chief of the Powhatan people and a tributary of tribes along the Tidewater region of Virginia. Her story begins at the time colonists settled at Jamestown, Virginia and even though still a child, Pocahontas strived to help the settlers who were soon ravaged by starvation and disease.

Like many, I knew of Pocahontas but had no knowledge of the true circumstances of the life she lived in her quest to promote peace between the English and the Powhatan people. The author, Sue Wright, a psychologist by profession, has written not only a well researched account of Pocahontas’s life story but a heartrending account of this young woman’s heroic struggle to stem the tide of the tragedy to come. The author’s rich descriptive abilities and vivid sensory details bring this historical novel to life, capturing the reader as the sacrifice and suffering unfolds. I have thoroughly enjoyed reading Peacemaker’s Dream and have learned so much as a result. Highly recommended.