The Value of Perseverance

Perseverance is not a long race; it is many short races one after the other. –Walter Elliot (1888-1958), Scottish politician

Sometimes when I give a talk about writing, I’m asked what characteristic is most valuable to a writer. I can’t really answer that for everybody, but for me it has to be perseverance, that stubborness in my will center that won’t let me quit even when things aren’t going well.

I decided I wanted to be a writer when I was still a kid. Words trailed after me, enticing me to scribble them in notebooks then, pound them out on a typewriter later and now make them walk across a computer screen as I do my best to get a story out of my head onto paper. While counting all those words might be as difficult as standing under a dark winter sky and counting the stars, I figure I’ve written a few million letter combinations over the years. I’ve seen thirty-five of my books, where I successfully gathered those words into a story, published for readers like you. Well, eleven of them were for young readers, but  as I used to tell my hometown readers back when I was publishing the middle reader and young teen books, you can be young at heart and enjoy any story. I’ve certainly enjoyed many books written for children as I read them aloud to my children and grandchildren. I have even written a picture book story that is still looking for a publisher.  Who knows? Maybe someday the magic will happen and a grandmother will read my story to a grandchild.

So, now that I’m getting on the far side of young, I can look back at my writing years and see the times when discouragement was strong. Those were times when my stories weren’t finding editors who loved my words and thus those stories languished on my rejection shelf with no readers ready to jump into my stories. Sometimes everything is timing. Could be, the Lord was guiding me through a few years of rejections toward the inspirational book market even while I was unsure of which direction was best. Then He gave me a story about a preacher and his family in the little town of Hollyhill. That story Scent of Lilacs, did find a loving editor in 2005 and me a home for many stories with a Christian publishing company, Revell Books.

But if I hadn’t hung on through those years of rejections and persevered in spilling those words out of my head onto screen or paper, none of my last twenty plus books would have ever made it out to you readers. Plain old hard-headed stubborness can be one of the ingredients of success.  When I was writing and not selling, if I had seen this quote from Babe Ruth, I might have written it in capital letters in my journal

Each word I wrote helped me step farther along the writing trail to eventual success.

Perseverance is not a long race; it is many short races one after the other. –Walter Elliot (1888-1958), Scottish politician 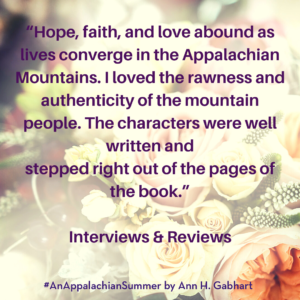 And because I persevered, I was able to invite you to the Appalachian Mountains in Eastern Kentucky for a couple of stories with history about the Frontier Nursing Service. Those Frontier Nursing midwives had bountiful perseverance. They rode through snow and ice, forded flooded streams and walked uphill trails in the rain and and shine to help mothers have safe deliveries and healthy babies. Once a woman went into labor, they stayed right there in the houses that were often rustic cabins until the baby came whether that was a few hours or days.  Wednesday I hope to write about one of those midwives I was privileged to meet after I wrote These Healing Hills. But you also have to admire the perseverance and courage of the couriers who gave their time to live in rough conditions and find ways to make the lives of the nurse midwives easier. That was the kind of young woman Piper was in An Appalachian Summer. She had a summer she would never forget and I took that feeling right out of the stories I read about the actual young women who volunteered with the Frontier Nursing Service.

I’m so glad this reviewer liked my mountain characters because they, for sure, knew all about perseverance and hanging on when the going was tough.

Have you made it through some hard times or achieved a goal through dogged determination and perseverance?