Writing and Computer Programming and ... The Heisenberg Uncertainty Manuscript

The Numbers of Sci-Fi 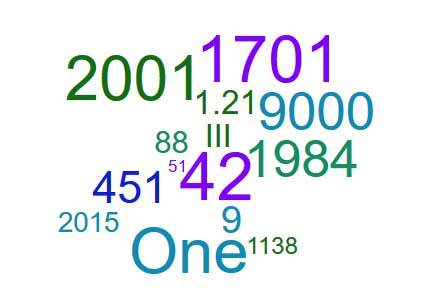 “All right,” said Deep Thought. “The Answer to the Great Question…”

“Of Life, the Universe and Everything…” said Deep Thought.

“Is…” said Deep Thought, and paused.

The above dialog is one of the great jokes in The Hitchhiker’s Guide to the Galaxy. And in the decades since Douglas Adams first wrote it, sci-fi fans have used the number 42 as a stand-in answer for any puzzling question.

But 42 is far from the only legendary number in sci-fi. I started thinking about those numbers when I was writing my book The Maltese Salmon, and I needed some random-ish numbers to use as post office boxes and email counts in various places in the text. The book is a sci-fi comedy, so I thought why not use some famous sci-fi numbers as a nod to the classics. So I did some research, asked other sci-fi fans, and came up with the list below of legendary sci-fi numbers.

Disclaimer: This list is far from exhaustive. And, of course, it all depends on (a) what fictional works you count as sci-fi vs. fantasy, etc. and (b) the extent of fame you set as a criterion. In other words, ask ten sci-fi fans for a list of classic sci-fi numbers, and you’ll probably get ten completely different lists. This is my list.

1 - Let’s start with number 1, perhaps best known for Number One, the second in command to the captain of the Enterprise. It was a nickname for Will Riker under Jean Luc Picard on the Enterprise D. But on the original Enterprise under Christopher Pike it was the only name we ever got for the Majel Barrett/Rebecca Romijn character. She may finally get a name in Star Trek: Strange New Worlds, or maybe not.

3 - This is for trilogies. The Greeks invented the trilogy in the 5th century BC or earlier. Trilogies have been around in movies since at least the 1940s. Tolkien wrote the Lord of the Rings (fantasy, not sci-fi) as a trilogy in the 1950s. But I think the idea of trilogies, especially in movies, came fully into the public consciousness with Star Wars, even though George Lucas started with the number 4 (or IV). Today many movie franchises are done in trilogies. And in publishing where a series often means more sales, three is least number you’ll find for a book series.

9 - There are lots of 9s in sci-fi. There’s Star Trek’s Deep Space Nine and Seven of Nine, the movie District 9, and the infamous Plan 9 from Outer Space.

51 - As in Area 51, a completely non-fictional Air Force facility with a huge sci-fi mythology.

88 - The speed in miles-per-hour that Doc Brown’s tricked out DeLorean in Back to the Future has to reach to achieve time travel. Of course, time travel is also dependent on the other important number from those films, 1.21 Gigawatts of electricity.

421 - It was stormtrooper TK-421 who guarded the Millennium Falcon in the Death Star's hangar bay.

451 - From the great Ray Bradbury novel Fahrenheit 451, which is the temperature needed to burn books in that dystopian totalitarian future. Actually paper ignites at around 480 degrees Fahrenheit, but let’s not be that guy who points out stuff like that.

1138 - THX 1138 was George Lucas’s directorial debut back in 1971. Lucas then put references to 1138 throughout Star Wars. A monitor in the Death Star reads “THX/1138.” When Luke and Han are disguised as stormtroopers and moving Chewbacca through the detention level of the Death Star, a lieutenant asks where they are taking him. Luke replies that he is a prisoner transfer from cell block 1138. The number has been scattered through other Star Wars movies and merchandise.

1984 - From the George Orwell novel of the same name, another dystopian totalitarian future.

2015 - I can’t list every future year mentioned in every science-fiction work, especially with alternate timelines that change the dates. So I’ll just let the year 2015 can stand for them all. It’s when Back to the Future II was set. In real life that year is already well in the past. So where's my hoverboard and my Mr. Fusion?

You can look for several of these numbers as well as about 77,000 words in my book The Maltese Salmon, a comedy sci-fi mystery, and the second book in my Galactic Detective Agency series. Check it out at: https://www.amazon.com/dp/B08J8F6VDJ.
Like  •  0 comments  •  flag