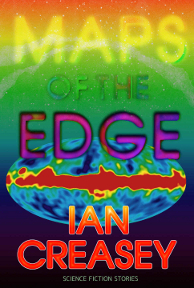 I'm pleased to feature Ian Creasey as today's author. Please read to find out what he has to say, what he's been up to, and what he's got on the horizon.

I was born in 1969 and I live in Yorkshire, England.  I began writing when rock & roll stardom failed to return my calls.  So far I've sold forty-odd short stories to various magazines and anthologies.  My spare time interests include hiking, gardening, and environmental conservation work — anything to get me outdoors and away from the computer screen.

2.  Where are you from and what's your favorite thing about where you live?

Only one favourite thing?  Yorkshire has everything!  Cities full of culture, surrounded by fantastic countryside….  So I guess I'd have to say that the best thing is living in a city while still being able to get outdoors.  I go on lots of long walks.  From my house I can reach the bleak moorland that inspired Wuthering Heights, or the spa town visited by Darwin before he published the Origin of Species, or the cemetery where Sylvia Plath is buried, or any number of stately homes, Roman roads and mediaeval packhorse bridges.

The landscape is full of stories.  It inspires me.  One of my major breakthroughs as an apprentice writer was realising that I could actually write about where I lived.  My early efforts were set in generic, vaguely imagined elsewheres.  Because science fiction is the literature of the exotic, I didn't feel that my mundane surroundings were the stuff of stories.  But eventually I gained enough confidence to realise that my own environment was as potentially exciting as any alien world, and certainly more authentic.  When my stories became rooted, they started selling.

For example, my first sale to Asimov's was "The Hastillan Weed", which is about conservationists fighting a poisonous alien plant spreading across the Yorkshire countryside.  I've done plenty of conservation work myself, so I was able to nail down the setting and the practical aspects.  The story begins with a safety talk on the correct use of the spade — you can't get much more down to earth than that!

3.  Tell about your latest book/story.  What made you want to write it?

My book is a collection of stories, Maps of the Edge.  All the stories were originally published in various magazines: about half of them in Asimov's, and the rest elsewhere.  I put the collection together because I wanted to make the stories available, and rescue them from mouldering in back-issues.  Electronic publishing is causing enormous upheavals in the industry, but it's a boon for authors whose projects might not have been viable under the old model.

Because the stories were written separately over a long period, they cover a range of styles and subjects.  There's a couple of comedies, but most of them are more serious.  Perhaps the darkest story is "Cut Loose the Bonds of Flesh and Bone", about a woman confronting her dying mother, who is planning to have her mind uploaded so she can continue to exist after death.  In general, I start with science-fictional premises and put them into character-based stories.

4.  Where can people find your books/stories (links please)?

My collection is available for Kindle on Amazon.com and Amazon.co.uk, and in multiple electronic formats at Smashwords.

There's also a free sample story, "The Prize Beyond Gold", which can be downloaded in Kindle format directly from my website or in various other formats from Smashwords.

5.  What are you working on right now?

I always have several projects on the go, at different stages.  I don't like being too specific about any particular work in progress, because in the past I've talked about projects and then had them stall, which I find embarrassing because it feels like I've promised something that I haven't delivered.  But, in general, I'm always working on something that I hope will be awesome.

6.  What inspired you to be a writer?

When I was younger, if I read something I didn't like, I'd say to myself, "That was rubbish — I could do better than that!"

Of course, when I actually started writing, I discovered two things: firstly, that it's a lot harder than it looks; and secondly, that fiction is very subjective.  Nowadays, I still see a lot of stuff published that I don't much like — I'm less dismissive and more polite about it, but I remain baffled by the critical and popular acclaim that certain works receive.

8.  Who is your favorite character in your stories? Why?

My favourite character is Drake, in "Demonstration Day" and its sequels.  The milieu is inherently fun to write in — the stories are comedies about stereotypical mad scientists — but Drake is the special ingredient.  He's a salesman who sells all the necessary gadgetry to the wacky inventors, and he gets blamed (fairly or unfairly) whenever anything goes wrong.  Here's some of Drake's narration to give you the flavour:

"As the scientists began walking in, I mentally assigned a sales target to each experimenter.  Pale from lack of sun, or tanned scary colours from exposure to strange rays, the early arrivals stared at each other as though they'd forgotten what other people looked like.  Their expressions told of the despair of failure, or the voyeuristic exhilaration of uncovering the universe's secrets.  Only a few remained unmarked, as if they'd discovered an anti-ageing drug, or been silently replaced by a robot they'd foolishly made in their own image.  I recognised most of the arriving scientists, but one face was missing…."

9.  What character from your stories was the hardest to write?

In my fantasy story "Heart of the Forest", a dryad is sent by the forest to infiltrate human society and stop people cutting down all the trees.  She was a tough protagonist to write, because she started off not knowing any human language or anything about the environment outside the forest.  So when she arrived at the nearby village, she didn't have any vocabulary for what she encountered — she didn't even have the associated concepts.  Depicting her viewpoint was a huge technical difficulty, which I solved by cheating a little.

(That story isn't in the collection.  I decided to start with a book focused on science fiction, and I plan to do a follow-up book of fantasy stories, probably next year.)

10.  What's the biggest challenge about being a writer?

I think different writers face different challenges.  My own biggest issue is a kind of obsessive perfectionism whereby I spend excessive time on editing and polishing.  As an example, my collection Maps of the Edge consists entirely of previously published stories.  Many other authors would simply have used the texts that already existed, as they first appeared.  But I went back and re-edited every single piece to add yet another layer of polish.

11.  Do you have any advice for beginning writers?

I recommend joining a critique group — there are some good online workshops if you can't find a local writers' group.  Critiquing the work of other new writers gives you a feel for common mistakes, which you then learn how to spot in your own work.

I love Jack Vance for his superb prose style.  His Dying Earth books are genre classics, but almost anything by him rewards reading.  A polished style will elevate most material.

J.G. Ballard's collection Vermilion Sands is probably my single favourite SF book.  The stories are about a group of artists and eccentrics who all live in the same beach resort.  The book doesn't rely on any of the standard SF tropes, and consequently it still feels fresh even though it was published 40 years ago.

I admire Terry Pratchett because he writes humour with real heart and feeling — this is an incredibly difficult combination to pull off.  It's easy to write jokes by shuffling archetypes and clichés around, but it's much harder to write comedy with genuine characters, which is what Pratchett does so well.

13. What books have most influenced your writing?

Ursula Le Guin's The Language of the Night is a collection of essays, including famous pieces such as "From Elfland to Poughkeepsie", which discusses prose style in fantasy fiction.  Other essays talk about myths and archetypes, the treatment of gender, and so forth.  I read this book at an impressionable age, and it definitely opened my eyes to the fact that stories weren't just stories: they had a lot of underlying meanings and assumptions.  It made me pay attention to the thematic implications of what I write.

I've gone back and re-read this book several times.  It still resonates.  It's full of classic quotes such as "Nobody who says, 'I told you so' has ever been, or will ever be, a hero."  (In fact, I recently referenced this quote in a critique of a colleague's story, when I wrote, "Nobody who smirks is ever a sympathetic protagonist."  So the lessons of this book have certainly stayed with me.)

A red pen, and a set of highlighters.  The red pen is for editing: I always compose my rough drafts onscreen, but the polishing stage is a cycle of printing the manuscript, marking it up in red pen, printing it out again, and so forth.

The highlighters are my reserve system for when something isn't quite working and I need to analyse it.  I print out the manuscript and mark it up liberally in various highlighters, with different colours for different elements that I want to examine: theme, characterisation, description, etc.  Sometimes just seeing the pattern of the colours makes me realise that the flow of the narrative needs rejigging.  Other times it's a case of whether there's too much of one colour, not enough of another, etc.  A protagonist can be perfectly well characterised in your mind, but if you look at all the characterisation elements you've highlighted on the printout, you might realise that there's a big gap between what's in your head and what's on the page.

15.  Where can people find out more about you and your books/stories?

My website contains full details of all my published stories, including commentaries on the background and inspirations behind them.  There are links to some freely available stories, including audio recordings.  And there's an information page for my collection, Maps of the Edge.

If you are a writer interested in Writer Wednesday, please send an email to ww (at) ambersistla (dot) com.