The open-plan office is a terrible, h... Take a Break

Library Rules: How to make an open office plan work 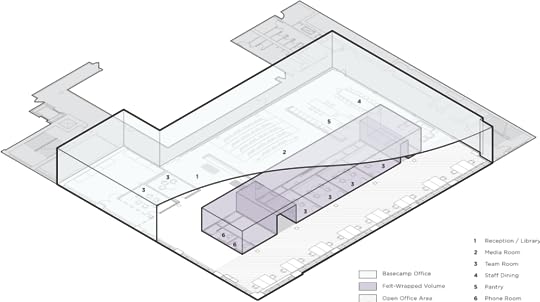 First off, an open office is appealing from a few perspectives:

It makes economic sense. Building out separate private spaces for everyone is costly. Yes, you could argue people being unable to work out in the open is even more costly, and I wouldn’t fight you on that, but that’s an abstract economic impact. Paying construction bills has a very direct economic impact.It’s more flexible to remain open. Companies like to imagine growth. If you have 20 employees today, but may have 40, 60, or 80 a year or two from now, it’s very difficult to forecast what you’re going to physically need. If you don’t build enough private offices for everyone, then some people are going to get pissed. If you build too many, you’ve wasted a bunch of space. Open is flexible and flexible is comforting — especially if you’re signing a 5+ year lease.You need less space. You can pack a lot of people into 5000sqft of open space. You can nudge desks together, you can squish people in a few feet, etc. I’m not suggesting these are good ideas, but they’re practical and workable. But if everyone needs private offices, you’re going to need a lot more space, which means a lot more rent. That’s expensive.

So it’s not hard to see why open offices make sense from a purely practical, economic perspective. They’re also easier to clean and maintain, too. But like DHH, I don’t buy the collaborative benefits. Not for a second. That’s a mask used to obscure the real reason — cost savings. Open plans are cheaper to execute, period. And the people who make the decisions about how the office is designed are usually the ones that make the financial decisions.

Ok, so given all that, if you do go open, how do you make open work?

Walk into any library in the world and you’ll notice a few things. One, they’re generally open spaces with a number of desks and surfaces scattered throughout — similar to an open floor plan office. And two, they’re quiet. There are few things as culturally consistent as library design and library behavior. At Basecamp we call these Library Rules. 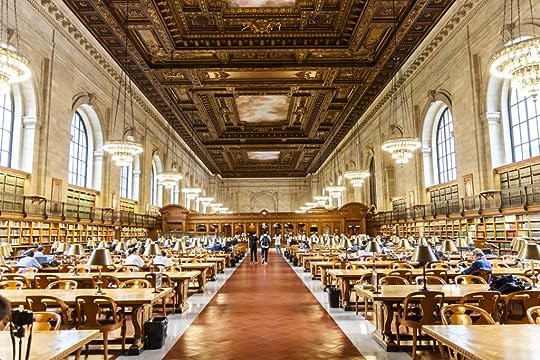 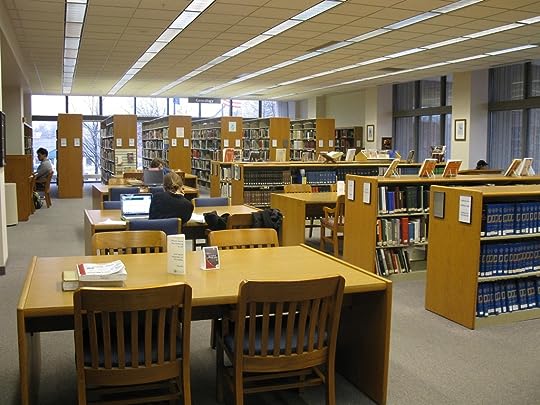 Libraries are full of people working, reading, thinking, studying, writing, contemplating, designing, etc. Yet they’re silent. People are heads down doing independent work. In our opinion, this is the model business, the model office. We pattern our way of working around Library Rules.

So this is the first lesson: Embrace Library Rules. Open offices work all around the world every day. They’re called libraries! And the more you treat your office as a library of work — rather than a chaotic kitchen of work — the better an open floor plan is going to work. Making an open floor plan work is a cultural decision.

Library Rules means keeping to yourself, keeping your voice down in hushed tones, not distracting one another. If you do need to talk to someone at normal volumes, grab a room. A key to making open floor plans work is also having private rooms scattered throughout the space. A place where a few people who need to discuss something in real time can jump in, talk it up and work it out without bothering anyone on the outside.

At our office, we call these private spaces Team Rooms. Here’s what they look like: 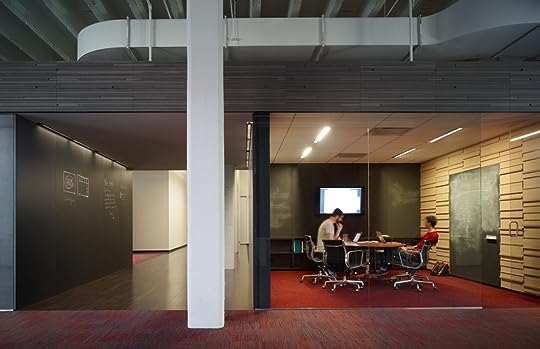 We have 5 team rooms at the Basecamp office. The carpet outside the rooms is striated red and grey, but the carpet inside the rooms are just red — signaling focused, quiet space.

BTW, eliminating distractions doesn’t just mean physical distractions. It increasingly means virtual distractions. Real-time chat rooms/channels are basically open offices — and worse in many ways. So even if you’re fortunate enough to work remotely, or in an office with private rooms for everyone, if you’re forced to follow multiple real-time conversations all day long, you’re effectively working in open plan office too. Sorry!

What’s worse than an open floor plan? An open floor plan loaded with hard surfaces! And given that many open plans are housed in old warehouse/loft-like spaces, you’re materially at a disadvantage. All that wood and brick and glass looks great, but it sounds awful.

Our office space started as a 10,000sqft concrete and glass box. It was a former furniture factory, and a present day echo factory.

A big part of our office design was acoustic design. For example, we built a huge volume in the middle of the office that’s wrapped in stacked felt. The felt serves as a sound absorbing material, and the irregular stacking helps deflect sound. The material and application looks like this: 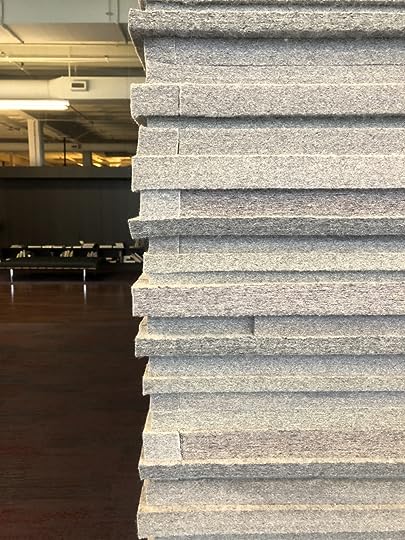 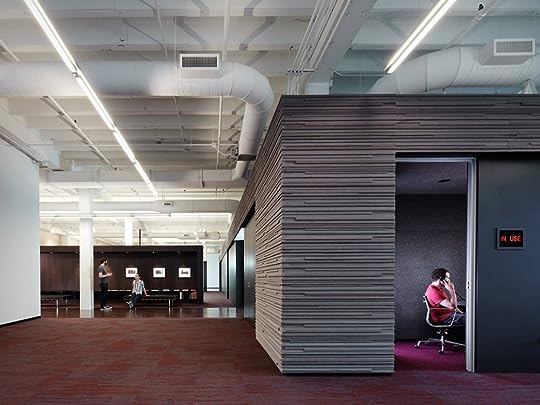 We also lined one long wall with an acoustic material used in recording studios to help absorb and deflect sound. 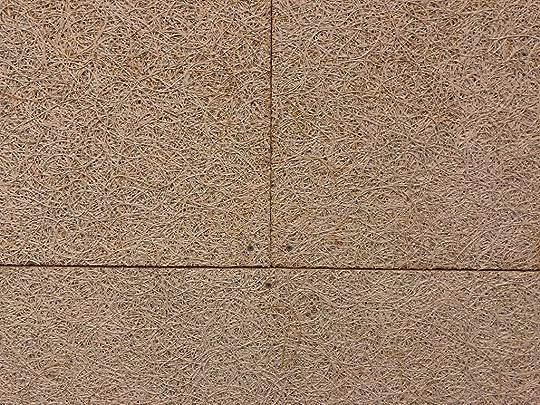 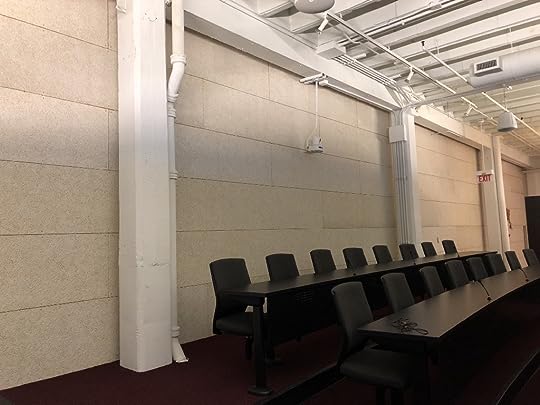 Carpet tiles lines the floor of the open work area to further reduce echo and sound transmission when people are speaking openly: 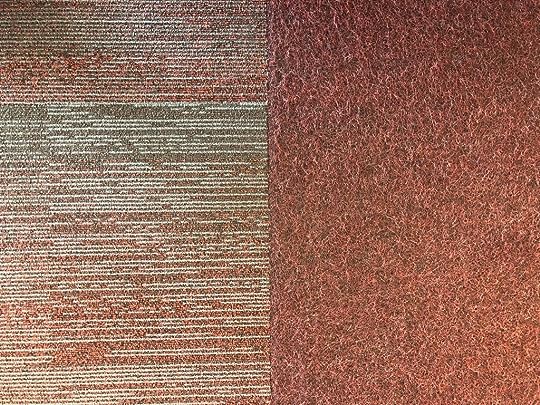 Striated outside, solid red in the team rooms

And even the team rooms themselves — rooms designed for collaboration and normal volume communication — have been designed with acoustics in mind. From the acoustic ceiling tiles, to the stacked and slotted cork walls to deflect sound and kill echo, each decision was deliberately made to keep sound from traveling where it shouldn’t. 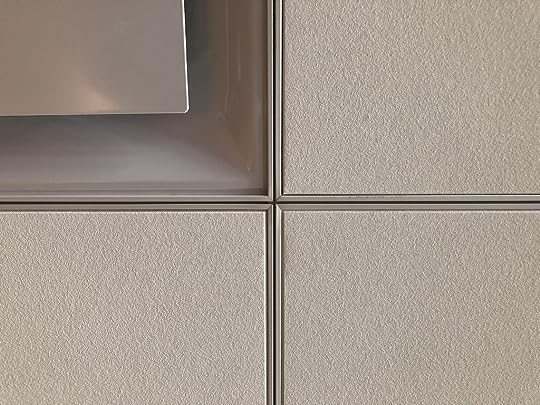 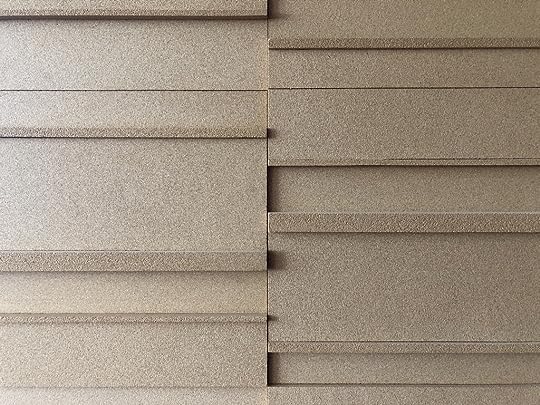 And because we can’t help ourselves, we even installed neoprene grommets between any team rooms that shared the same glass wall. It’s hard to see this in the photo, but there’s a slight gap between rooms where the glass passes across an inner wall. The neoprene expands to fill that space and kill sound transmission between rooms. 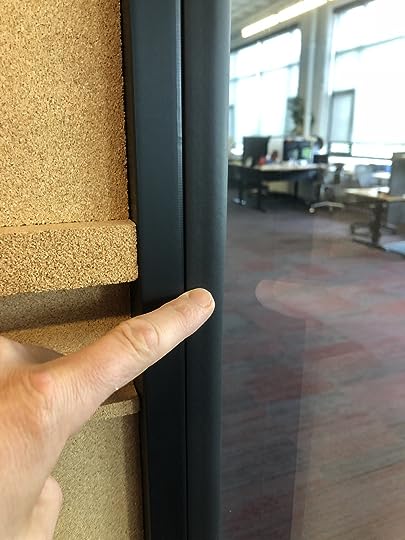 Me pointing at the airtight heavy neoprene grommet between the wall and the glass.

We also built a separate sound proof (room inside a room) recording studio for recording our podcasts. It’s also lined with the same material we had on that long back wall. 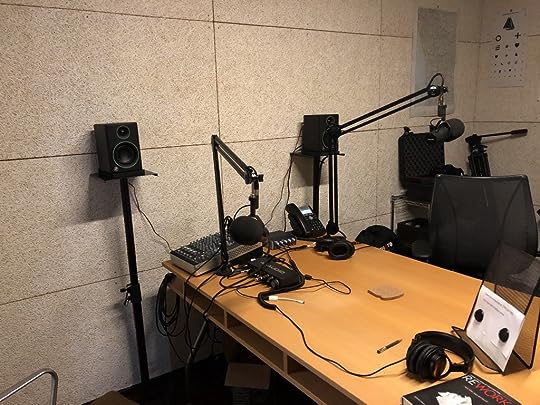 Desk dividers out in the open office are made of another acoustic material made from recycled plastic: 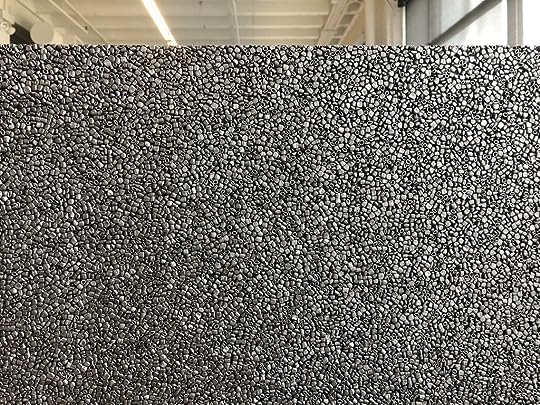 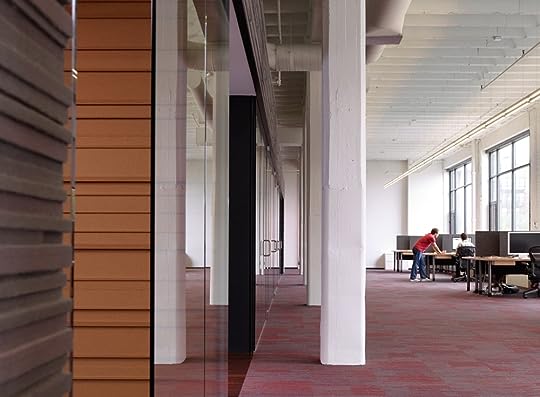 And finally, anyone who needs to make a private phone call (personal or business), can duck into one of three phone rooms. The rooms are sound proof and lined with the same material we use for the desk dividers. There’s also an IN USE sign that lights up whenever someone’s inside — reminding everyone that someone’s in there.

Me on a fake phone call sitting in one of our phone rooms.Density and desks

Aside from acoustics, there’s another consideration which plays a large role in keeping an office quiet a calm — density. Packing people on top of each other is a form of induced stress. Desks face each other (but dividers keep people from seeing one another), and there’s about 10 feet of space behind each person’s desk. You never have to worry about rolling your chair back and hitting someone. 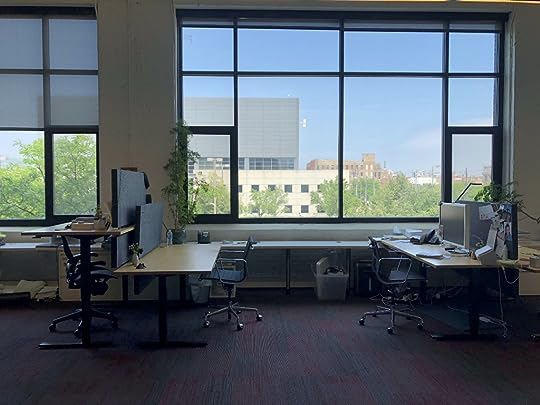 Everyone gets a standing desk, and everyone sits near a large window.

Further, our desk layout is arranged so no one is looking at anyone else’s screen. Knowing people are looking over your back — even unintentionally — is a really uncomfortable feeling. We’ve eliminated that with our layout.

Last, the desks are lined up along huge windows to make natural light a full part of everyone’s day. Natural light is especially calming, and independently operated shades help with the rare glare based on the season.

Yes, an open floor plan is a choice, but it requires a cultural commitment to respect and quiet. Luckily everyone already knows how to do that since everyone knows how to behave in a library. Beyond that, it also requires a capital investment and deliberate office design choices. Even if everyone’s quiet, tossing a bunch of desks in an echo chamber isn’t going to get the job done. If you want to keep things quiet, you have to think about what you’re designing. Every decision has an impact one way or another.

And it’s all optional!

We did the best job we could designing an open office (and a culture) that allows everyone to work in focused peace and quiet every day. But even that’s not good enough, which is why no one is ever required to come into our office. Basecamp is a fully remote company of 54 people, and even the 14 people who work in Chicago work remotely from home most of the time. Walk into the office on any given day and you’ll see 3–5, if you’re lucky. Yes, it’s a tremendous waste of space most of the time, but that’s a concession we’re comfortable making.

You can find more photos of our office right here . We talk about the above strategies, and more, in our upcoming book “I t Doesn’t Have to be Crazy at Work .” And if you want to try a product that’s deliberately designed to keep work as calm as possible, check out Basecamp 3 .

Library Rules: How to make an open office plan work was originally published in Signal v. Noise on Medium, where people are continuing the conversation by highlighting and responding to this story.

Jason Fried isn't a Goodreads Author (yet), but they do have a blog, so here are some recent posts imported from their feed.