The Bag in the Road 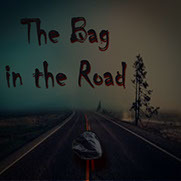 It wasn’t unusual for Emily to see trash bags on the side of the road on her way to work. She knew that someone, whether it was a city worker, an inmate, or just a good group of citizens, would travel up and down the roads picking up trash, leaving the bags to be picked up by a garbage truck later.

What was unusual, was when one day she was driving to work, one of the bags rolled onto the street in front of her, and appeared to have something alive inside.

She stopped her car, only feet away from the bag as it rolled side to side as if whatever inside, was trying to get out.

Since she was driving alone there was no way she was going to get out to find out what it could be, so she pulled out here phone to call the police.

Fifteen minutes later she watched as two officers approached the bag. One officer knelt to open it, while his partner covered him with her gun.

Emily stayed back while she watched the officer slowly tear the bag open, examining its contents.

After a few seconds of peering inside, he quickly began tearing the bag open revealing a half-naked woman.

From what Emily could see, she was covered in grime and badly bruised all over. The officer laid her down, and called for an ambulance.

His partner lowered her gun, and went to the cruiser to fetch a blanket from the trunk. The woman from the bag seemed disoriented and half asleep.

As the female officer returned to her partner with the blanket, the girl from the bag seemed to jolt awake and dug her teeth into the side the cop’s neck.

“Tom!” the female officer called out to her partner.

He screamed as blood began gushing out of the side of his neck. His partner drew her weapon and shot the girl. It took several shots before the girl released her bite and fell back.
Her partner, Tom, fell to his side as well, holding his hand to the gash on the side of his neck in a desperate attempt to stop the bleeding.

The first ambulance she called arrived less than a minute later, and realizing what was happening, ran to the officer to tend to his wound.

Knowing there wasn’t much they could do there, and that he needed immediate surgery, they quickly moved him to the ambulance, and sped off.

As the ambulance took off, a second ambulance arrived for the girl.

Emily watched everything unfold with horror.

****
Dr. Jenkins, the county coroner entered the morgue to perform an autopsy on the girl they found in the bag.

He grabbed her file to take a quick look before he pulled her body out of the cooler.

Satisfied, he pulled her tray out. Her entire body was covered with a white sheet.

Dr. Jenkins almost jumped when he noticed some movement under it. He slowly reached out, and pulled the sheet off the body.

No one heard him scream.

****
Tom laid in his bed slowly rocking his head from side to side, moaning.

The hospital staff was able to stop the bleeding, and according to all their test, he should had been recovering, yet he seemed to have fallen into a deep sleep. Their test showed brain activity. His blood pressure was a little high, but nothing that should prevent him from being awake and alert.

His partner, Elaina sat next to him, hoping with each moment he would wake up. The department had given her a couple of days off to be with her partner. She wanted to be there when he woke up.

She was about to take a quick break when suddenly, he quit breathing. Alarms started sounding on the monitoring equipment, and she began to panic.

She went to her partner, feeling the need to shake him awake, finally falling on his chest, hugging him one las time.

The nurses entered the room to Elaina’s screams, and blood spraying everywhere.

They pulled her off and while half the nurses attempted to subdue Tom, who was acting like a wild animal, the other half tended to Elaina, who had blood spraying from her neck.

A nurse came in with a syringe, and stuck into Tom, his eyes growing wide as it seemed to have no effect.

They all struggled to restrain him.

By the time they had Tom tied down, and Elaina on a stretcher to get her into surgery, all the nurses were covered in blood.

****
In the basement, the girl from the bag stepped over Dr. Jenkin’s corpse, walking out the open door, and down the hallway.

“Ma’am, are you okay?” an orderly asked rounding the corner and seeing her limping up the hallway.

She only moaned slightly.

“Ma’am, do you need any assistance?” he asked more firmly when he didn’t get a response.

He wasn’t sure if she was on drugs, so he moved cautiously. He’d dealt with enough addicts to know they could be extremely dangerous, even when they appeared lethargic.

He stopped a foot in front of her, but she didn’t seem to notice him. He was about to take another step backwards to keep his distance when she quickly lunged at him, and he was unable to dodge her.

She rammed into him, and he fell to the ground with her on top of him.

As he tried to push her off, she was already ripping into his throat. He gurgled as he struggled against her, but it was too late. His strength was already leaving him.

Up the hallway, Dr. Jenkin’s moans could be heard.

****
Emily woke up for work the next morning, still recovering from what she had witnessed the day before. It was like something she would see on TV, not something she ever thought she would witness on the way to work.

As she drove, she cringed every time she saw a bag on the side of the road. She knew she was just being silly, but all she could imagine was each of those bags with another person in them, ready to attack as soon as they were freed.

She suddenly swerved as an ambulance flew past her, breaking her spell.

Her chest heaved as she strained to catch her breath.

Calmness returned as she pulled into the bank where she worked. She was ready to get back to her normal routines.

“Where is everyone?” she asked her manager, Cindy.

“I don’t know what’s going on, but only Missy called in saying she wouldn’t be in. Everyone else just didn’t show up,” Cindy replied. “I’m about to start making calls here soon if people don’t start showing up.”

Emily liked her job, but the thought of being the only teller on a Friday didn’t appeal to her.

Outside the bank, they could hear more sirens around town.
Cindy came back out after a half an hour.

“I just got off the phone with Robby’s fiancé. She answered his cell phone. She said he was attacked this morning when he went out to get the paper,” Cindy said. “He’s at the hospital now in surgery.”

Emily brought her hands to her mouth. She couldn’t believe what she was hearing.

After a moment, Emily asked, “Where’s everyone else?”

Cindy shook her head as she answered, “I wasn’t able to get ahold of anyone else.”

They just looked at each other, until Emily broke the silence.
“Well, I suppose I’ll get ready for the day and hope it’s not overwhelming,” she said with tired smile.

They didn’t have any customers the entire day, to both Cindy and Emily’s surprise and delight, yet they were still exhausted from the worry of a large crowd arriving at any time.

Emily had closed her drawer and grabbed her purse, ready to leave when suddenly a car came crashing through the front glass doors of the bank.

Emily instinctively threw herself to the ground, afraid that they were about to get robbed.

After a few moments, she risked peeking her head up over the counter.

What she saw led her to run for the crashed vehicle. Inside was an injured man at the wheel. When she approached, she could see he was badly injured and there was blood all over the interior of the vehicle.

The man inside was moaning slightly, and she felt slightly relieved that he was still alive. She ran back to her purse that was still laying at her counter, and grabbed her cell phone.

When she tried to call 911, all she got was an “All circuits are busy at this time. Please try again later” message. This left her unsure of what to do next.

Cindy appeared from around the corner.

Cindy disappeared for a few minutes, but when she returned, she was carrying several small rags, dripping with water.

They both ran to the car to tend to the injured man.

They were about to begin asking him some questions while they cleaned his wounds, when they both noticed at once that he had stopped breathing.

They were so focused on the injured man, that they didn’t notice a small group of people entering the bank, slowly walking toward them.

Emily whipped her head around when she heard Cindy scream in pain.

She was being attacked by a woman drenched in blood herself.
Emily was about to grab the women to pull her off of Cindy, when something grabbed her from the car.

The man that was dead inside suddenly came to life and grabbed her arm, biting it deeply.

She tore her arm away, and began to move away from the crowd, but she didn’t make it far as she tripped on some rubble from the crash and fell to the ground.

Blood was quickly escaping from her arm, and the crowd of people were slowly closing in on her.

She started to feel light headed from the loss of blood, but tried to drag herself away.

The rear door was within her grasp when she suddenly felt something grab her ankle. The world was turning grey, as she turned and saw one man crawling up her leg, while others moved to both sides of her, knelt down, and began feeding on her.

The pain was immense, but fortunately for her, short live. As the world turned slowly from gray, to red, to black.