A Photography Exhibit in Naples, Florida

If you follow my posts on social media, or read them here, or on Wicked Cozy Authors, you know I am moving. It has been a four month-long ordeal during which we have done the following. 1) Cleaned out my late mother-in-law’s crazy-full apartment. “Gee, I didn’t know you could get this much into 937 square feet,” said my helpful brother-in-law. 2) Helped my son and his wife clean out their Connecticut home and move to Virginia. 3) Got our house ready to sell (cleanout #3) and then sold our house and moved out (cleanout #4, still in its final, final throes even as you read this).

So it was with particular joy that my husband Bill and I spent four days in June in Naples, Florida. Bill had a photograph selected for a juried show at the Naples Art Association, mounted in conjunction with Cameras USA. Incidentally, the portal Bill submitted through was recommended to him by Bob Thomas, artist and husband of our own Lea Wait.

The opening reception was June 17th, and long before any of these moves were fully scheduled, we had decided to attend. I always believe whenever you are recognized for your work, you need to celebrate it. You just don’t know when something like this will come around again. For example, the first year I edited the Level Best anthology, Judy Green’s story was nominated for an Edgar® Award. Three of the editors, plus one former editor, attended the banquet. (Plus Judy and her husband, of course.) And, indeed, it never happened again while we were at Level Best. Celebrate your successes people, the failures will come often enough.

Nonetheless, once all this other work piled up, I was nervous about taking those four days off. But it turned out to be a great time and a welcome break. 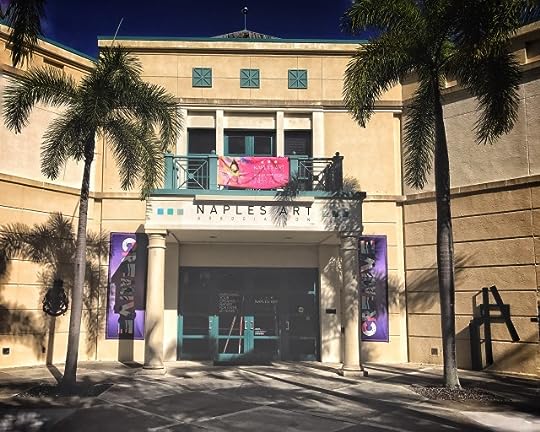 The Naples Art Association is a fabulous place, and a wonderful showcase for art. 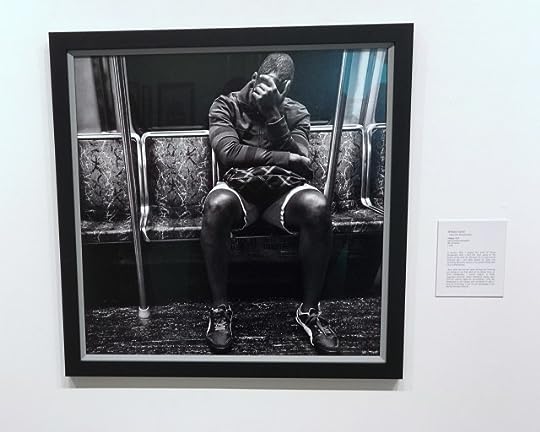 Bill’s photo in the show.

This is Bill’s photo from the show. The curator told us they’d brought a bunch of kids from their summer program through the exhibit the morning before the reception. One of the little kids, looking at Bill’s photo asked, “Why is he so sad?”

Bill’s title for the photo is “Fatigue.” I don’t know if the man is sad or simply exhausted, but given that he got on the T at the Mass General Hospital stop, it could be either. 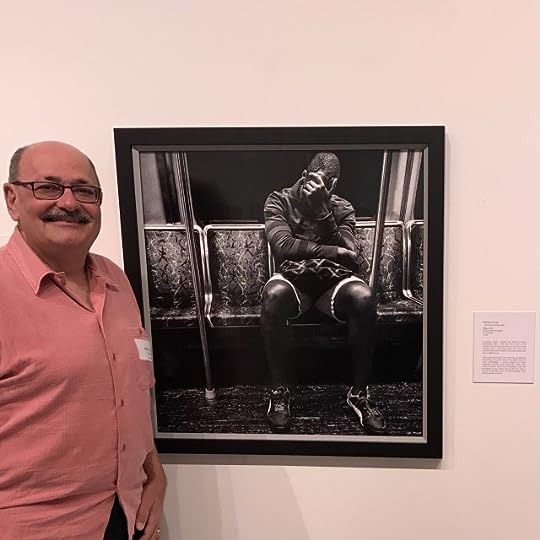 The photographer poses with his work.

It was an impressive body of work from an impressive group of photographers. I teased Bill, because all the artist bios said things like, “After I got my MFA in Photography at Yale…” Or, “After teaching photography for 30 years at R.I.T…” Or, “As a professional photographer…” Whereas Bill’s said, “Two years ago I started taking photos with my iPhone…” 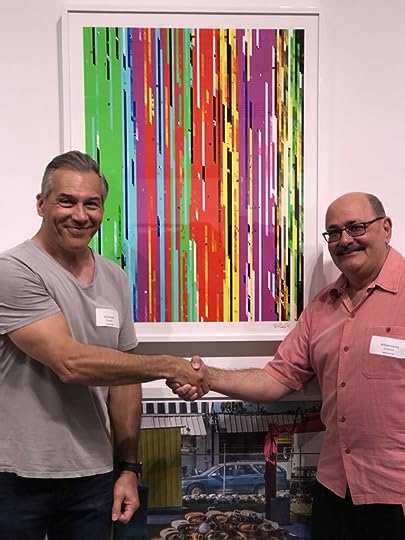 Bill Carito with New Orleans-based photographer Les Schmidt. In back of them is Les’s photograph, “Storm 64.”

One of the joys for me was seeing Bill interact with the other photographers and judges at the opening reception. It’s something I often get to do in the mystery writing and reading worlds and I know how it feeds your head and your soul.

New Orleans photographer Les Schmidt’s work, “Storm 64” was one of the few other digital works in the exhibit. The photo was taken on an old Blackberry that kept giving him error messages. When he attempted to retrieve the photos, it was evident the camera had glitched, but with an extraordinary effect on the photographs. Les recognized them for what they were, and incredibly, when they were blown up and color-matched, they didn’t pixilate or otherwise degrade. He told Bill he has enough for a series. His intentional and more conventional photography is extraordinary, too. You can see more here.

We returned to the exhibit before we left town to take some photos when the room wasn’t crowded. This is the wall Bill’s photo is on. The winner’s photo is on this wall, in the center on the bottom, but unfortunately you can’t see it. The winner was Brian Malloy from Plymouth, Massachusetts. The photo, of two old men is “an homage to Henri Cartier Bresson and the way in which he uses light and shadow,” and is really fantastic. Brian, who is an event photographer, (weddings, etc., see his website here) said he had never been recognized for his fine art photography before and gave a very gracious speech.

The photo on the left was a shelfie by the photographer/model, printed on plastic, shaped and backlit.

I loved the dynamism of the photo on the right. It was a good thing we were in the process of moving and bemoaning that we have way too much art, because I could have spent a fortune in that place. 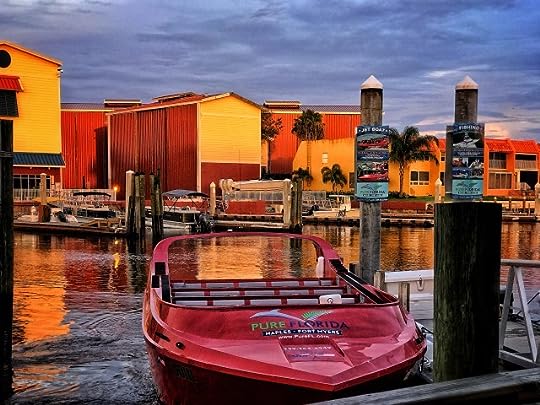 I have to admit, at first I didn’t “get” Naples. The old port is cool, but small and the rest of it seemed like a morass of gated communities full of something bigger than McMansions, (Big MacMansions?) and high rise condominiums.

But lucky for us, our friends Jon and Deb were in town. They would ordinarily be back in Kennebunk by June, but they had just bought a house and were overseeing renovations. They took us around and showed us all the sights. We went to their beach club, lazed on the beach, and swam in the warm Gulf. And honestly… 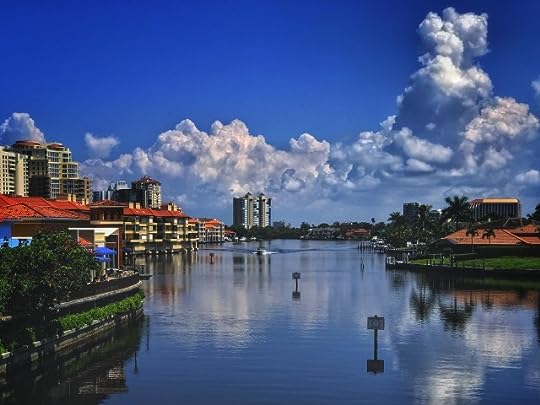 One of Bill’s shots of Naples.

How could you not “get” that?

The show is open until August 4, in case you happen to be in the area. You can see more of the photos and read more about it here. (Bill’s photo is the second one shown!) 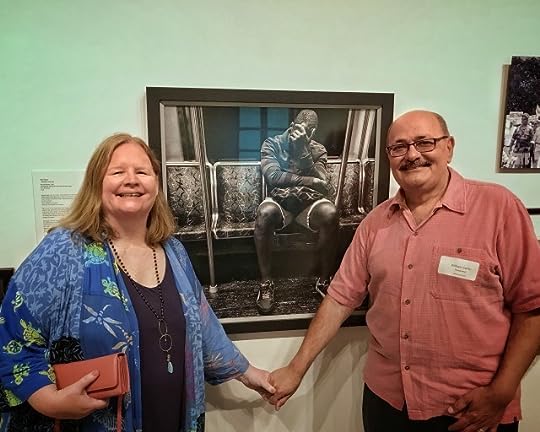 The photographer and his proud spouse.