A free book for your reading pleasure This should set the political cat amo...

Some amazing developments in 3D printing


We've discussed additive manufacturing, or 3D printing, in these pages on several occasions, most recently last month.  I've since come across two reports illustrating the profound impact this technology is having.

First, GE says that 3D printing has revolutionized the development of a new aircraft turbine engine, which will be used to power the new Cessna Denali light aircraft.

More than one-third of the advanced turboprop engine under development by GE Aviation will be manufactured using 3D printers, the company says.

As the ATP entered the design phase, GE engineers were testing an “additive demonstrator” of the CT7, the turboshaft engine from which the ATP is derived. The results achieved by the small team of eight engineers stunned chief engineer Mohammed Ehteshami. More than 900 non-rotating engine parts were reduced to just 16, resulting in a 35% weight reduction for the overall engine.

The results were so impressive that GE decided to halt the six-month-old design process, allowing engineers to insert a variety of 3D printed metallic parts.

When the ATP design re-appeared, 35% of the metal parts were intended to be 3D printed. Ehteshami says 855 parts were replaced with 12 made additively, including frames, combustor liners, sumps, exhaust case, bearing housings, stationary components in the flowpath, and heat exchangers.

The changes reduced the overall weight by 5% and improved specific fuel consumption by 1% compared with the original design, he adds.

There's more at the link.

That's pretty amazing from an engineering point of view.  As a general principle, the fewer parts (particularly moving parts), the greater the reliability;  so cutting out so many parts can only be a good thing for owners and users.

The second report concerns additive printing of a facial prosthetic.

Carlito Conceiao, of Sao Paulo, Brazil, was diagnosed with upper maxillary carcinoma in 2008, an aggressive mouth cancer that damaged his throat and destroyed facial tissue. Doctors operated before it spread to his brain but the life-saving surgery left a giant hole in his face.

In order to get rid of the tumor, doctors had to remove Conceiao’s right eye socket and part of his nose. 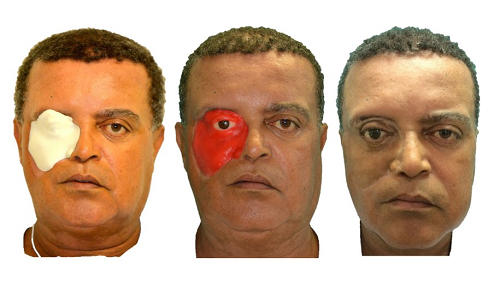 Dr. Rodrigo Salazar, a Peruvian dentist and specialist in oral rehabilitation, worked on the project for two years. He used a free app, Autodesk 123D Catch, which converts pictures into 3D models, to take 15 photos of Conceiao’s head on his smartphone. After uploading the pictures, he converted them into a virtual model and used a low-cost printer to create the new mold.

The mold was used to create Conceiao’s new prosthesis, which clinical artists volunteered to hand-finish to make it look more natural.

Again, more at the link, including many more photographs. Highly recommended reading for anyone interested in new developments in medicine.

In both cases, it's only the availability of additive manufacturing that allowed such advances.  Who knows where this technology will lead to next, and in what area of science, technology, engineering or medicine?  It seems to advance almost every field in which it's tried.  It may turn out to have an impact similar to the transistor or the microprocessor, by the time we look back at it in fifty years or so.

Peter Grant isn't a Goodreads Author (yet), but he does have a blog, so here are some recent posts imported from his feed.