How to Revise Without Losing Your Sanity

I'm reposting this in a slightly edited form from a comment I left on Stephanie Damore's blog yesterday. She was asking for advice about how to approach a major revision, and this was my answer:

If you're tackling a structural revision, this is the way I did my last one. It's a little labor intensive, but it's got structure out the wazoo, which I find incredibly helpful for keeping me from flying into a panic.

First: Go watch Dan Wells' talk on story structure, if you haven't. The video is here, and you can download his powerpoint to follow along here.

Then, what I did for my novel, which was "finished" but had some serious structural issues I didn't have the foggiest idea how to solve, was I wrote down every plot thread that I could think of in the book. 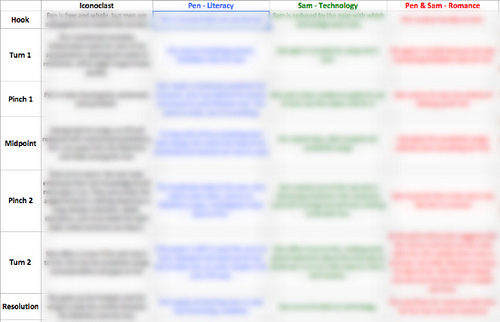 Next, I used Dan Wells' method to build a 7-point system for each plot thread. Many of them, I didn't all seven points — those were places where I had structural problems, so I worked on making sure that I had the complete chart filled out for every single thread, making sure that each had a solid arc, progression, and conclusion. Being able to work with just one thread at a time really helped keep the panic down because I could focus on just that one, instead of getting overwhelmed by the book as a whole.

You can see in the image above how I color coded the threads. Then I printed them out on 3×5 cards, one point per card, and spent a while crawling around on my living room floor, arranging everything into chronological order. When I was done with that, I'd turned my half-a-dozen threads into one long plot.

The places where there are multiple cards next to each other are where the same plot point spread across multiple threads. When I was satisfied with my layout, I typed the cards up into an outline. With that in hand, I went through the book, using the outline to 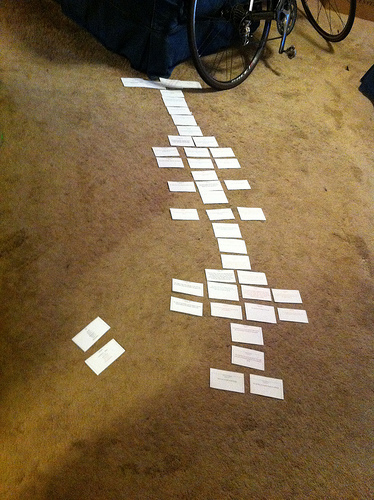 identify scenes that were superfluous to the plot and needed to be gotten rid of, as well as places where new scenes had to be written to fill in the holes of my first draft.

Although this does take a fair bit of work beforehand, I've found it so incredibly helpful, because it eliminates away the panic of "oh my god, I don't know how to fix this". Using Dan Wells' structure helps me to identify exactly where the problems are and how to fix them, and having the whole thing outlined beforehand means that once I'm actually working on the book, I only have to focus on the scene in front of me, instead of getting pulled a million different directions by a hundred different scenes that all need to be fixed.

It also works great for outlining the book before you start writing the first draft, but I like pantsing well enough that I usually only do that if I'm feeling really intimidated by a book.

Does anyone else use Dan Wells' system? What other methods do you use for structuring your books? Please share! I'm always on the look out for more tools.