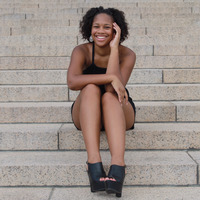 Born
in Alexandria, The United States
Twitter
TayMHenderson
Genre
Romance, Fiction, Thriller
Member Since
November 2014
URL
https://www.goodreads.com/taylor_henderson
edit data
Taylor Henderson is a twenty-year-old college student who was born and raised in Northern Virginia. She has been an adamant reader and writer since she was young, and has always found solace in the worlds and characters that other authors have brought to life in their works. Taylor plans to continue writing, and hopes to expand to different genres in the future.

"We would be lonely if we didn't use words. We are dependent on them. We're just dependent on them in a certain way." -Mark Strand Taylor Henderson is a twenty-year-old college student who was born and raised in Northern Virginia. She has been an adamant reader and writer since she was young, and has always found solace in the worlds and characters that other authors have brought to life in their works. Taylor plans to continue writing, and hopes to expand to different genres in the future.

“Hey Blake, how’s it hanging?” She questioned, looking through me at Blake, obviously ignoring my presence. She looked smug at the double meaning in her sentence. Blake furrowed his eyebrows. Brianna only talked to him on rare occasions when she bumped into us at my house. He must have been confused as to why she approached us in public, considering how she and I weren’t friends even in the slightest sense. Ignoring the fact that she was talking to Blake and not me, I spoke. “Longer than anything you’ve ever sucked.” Blake’s eyes widened for a second before he bit his lip to keep from laughing. Brianna turned toward me with cold eyes, her smile gone. “Not like you would know, Virgin Violet.” Her cohorts laughed and smiled like that was the funniest thing they had heard in their entire lives. “You know I really do admire you, Bri Bri.” I smiled sweetly, leaning forward as I placed my hand on her shoulder. “The fact that you’ve had so many fuck buddies this summer and still have not managed to contract some kind of STI or gotten pregnant really does inspire me.” I smirked wickedly. “At least from my knowledge you haven’t.” The look that came to her face made me want to buckle over with laughter. She looked flustered, angry, and embarrassed all at the same time. Maybe I hit a soft spot.”
― Taylor Henderson, Better Than Revenge
2 likes
Like

Beta / Proof Readers — 3946 members — last activity Jul 30, 2021 11:59PM
I am hoping that in creating this group I can help writers find someone to proof read their book. All books will be accepted.

The BookTrap — 138 members — last activity May 04, 2020 05:35AM
Brand new site where readers can experience a wide variety of genres, and get an up-close, personal look at our accomplished authors.

Sara Schoen
author of
The Rebel...