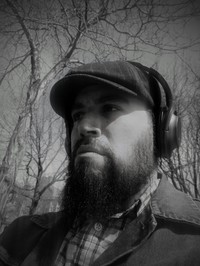 He has several published short stories, the most recent being "M.O.T.W." in the 2021 charity anthology Totally Tubular Terrors, edited by Jenna Moquin.

Barry is a former music journalist for Modern Fix magazine, a reviewer with New York Journal of Books, and a staff writer for the now-defunct horror movie website Cinema Knife Fight.

His debut short story collection is forthcoming, and he has been at work on a novel.

He was last seen outside of an abandoned train tunnel in the East Side of Providence. Born two blocks from the birthplace of H.P. Lovecraft and educated in Shirley Jackson's hometown, Barry Lee Dejasu currently calls Providence, Rhode Island his home.

He has several published short stories, the most recent being "M.O.T.W." in the 2021 charity anthology Totally Tubular Terrors, edited by Jenna Moquin.

Barry is a former music journalist for Modern Fix magazine, a reviewer with New York Journal of Books, and a staff writer for the now-defunct horror movie website Cinema Knife Fight.

His debut short story collection is forthcoming, and he has been at work on a novel.

He was last seen outside of an abandoned train tunnel in the East Side of Providence. ...more

Barry is currently reading
Whom the Gods Would Destroy
by Brian Hodge (Goodreads Author)
bookshelves: currently-reading

“Conventions are, indeed, all that shield us from the shivering void, though often they do so but poorly and desperately.”
― Robert Aickman
tags: atheism, bliss, convention, despair, ignorance, insanity, normalcy, sanity
3 likes

“No live organism can continue for long to exist sanely under conditions of absolute reality; even larks and katydids are supposed, by some, to dream. Hill House, not sane, stood by itself against its hills, holding darkness within; it had stood so for eighty years and might stand for eighty more. Within, walls continued upright, bricks met neatly, floors were firm, and doors were sensibly shut; silence lay steadily against the wood and stone of Hill House, and whatever walked there, walked alone.”
― Shirley Jackson, The Haunting of Hill House
tags: horror, house
690 likes

“Hauntings are memes, especially pernicious thought contagions, social contagions that need no viral or bacterial host and are transmitted in a thousand different ways. A book, a poem, a song, a bedtime story, a grandmother's suicide, the choreography of a dance, a few frames of film, a diagnosis of schizophrenia, a deadly tumble from a horse, a faded photograph, or a story you tell your daughter.”
― Caitlín R. Kiernan, The Drowning Girl
19 likes

“We feel so superior to the dead.
For example, if Michelangelo was so damn smart, why'd he die?
How I feel reading the DSM is, I may be a fat stupid dummy, but I'm still alive.
The caseworker's still dead, and here's proof that everything she studied and believed in all her life
is already wrong. In the back of this edition of the DSM are the revisions from the last edition. Already, the rules have changed.
Here are the new definitions of what's acceptable, what's normal, what's sane.
Inhibited Male Orgasm is now Male Orgasmic Disorder.
What was Psychogenic Amnesia is now Dissociative Amnesia.
Dream Anxiety Disorder is now Nightmare Disorder.
Edition to edition, the symptoms change. Sane people are insane by a new standard. People who
used to be called insane are the picture of mental health.”
― Chuck Palahniuk, Survivor
tags: chuck-palahniuk, dsm, dsm-iv, dsm5, palahniuk, survivor
0 likes

“…inside of a year, almost all of the stuff of which you were made got regularly switched out for other stuff, as you ate and drank and breathed, and yet if you said you had the same identity you did a year ago, no one would think to call you a liar. Being is always becoming; people change and stay the same. What is true for bodies is also true for selves: even the most honest person has many faces, none of which is false.”
― Dexter Palmer
tags: philosophy-of-life, science, science-fiction
0 likes

Groucho Marx
author of
Groucho a...

Chico Marx
author of
I Fratell...

Laird Barron
author of
The Croning

Thanks for the add, Barry. We have similar intrests: in Horror, Stephen King.

Hey! Nice having a new goodreads friend! :) thanks for the add