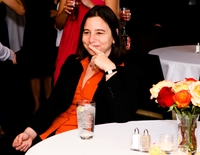 Born
in New York City, The United States
July 28, 1958
Twitter
sarahschulman3
Genre
Gay & Lesbian, Literature & Fiction
edit data
Sarah Schulman is a longtime AIDS and queer activist, and a cofounder of the MIX Festival and the ACT UP Oral History Project. She is a playwright and the author of seventeen books, including the novels The Mere Future, Shimmer, Rat Bohemia, After Delores, and People in Trouble, as well as nonfiction works such as The Gentrification of the Mind: Witness to a Lost Imagination, My American History: Lesbian and Gay Life during the Reagan/Bush Years, Ties That Bind: Familial Homophobia and Its Consequences, and Stagestruck: Theater, AIDS, and the Marketing of Gay America. She is Distinguished Professor of the Humanities at The City University of New York, College of Staten Island.

“There is something inherently stupid about gentrified thinking. It’s a dumbing down and smoothing over of what people are actually like. It’s a social position rooted in received wisdom, with aesthetics blindly selected from the presorted offerings of marketing and without information or awareness about the structures that create its own delusional sense of infallibility. Gentrified thinking is like the bourgeois version of Christian fundamentalism, a huge, unconscious conspiracy of homogenous patterns with no awareness about its own freakishness. The gentrification mentality is rooted in the belief that obedience to consumer identity over recognition of lived experience is actually normal, neutral, and value free.”
― Sarah Schulman, The Gentrification of the Mind: Witness to a Lost Imagination
tags: gentrification
12 likes
Like

“You have to notice the truth in order to be able to avoid it.”
― Sarah Schulman, The Mere Future
tags: truth
10 likes
Like

Which book would you like to read for January/February?