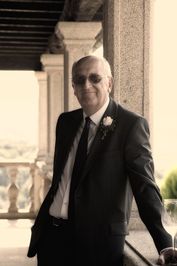 Born
Morecambe, The United Kingdom
Website
http://www.nigelseedauthor.com/
Genre
Thriller, Historical Fiction, Children's
Member Since
November 2014
edit data
A veteran of many years in the British Army working with the Army’s helicopters. He then joined the Civil Service before taking early retirement and moving to a villa in Spain. He writes his books when he can tear himself away from the view across the orange groves to the Mediterranean. Married with two children. He is slowly learning Spanish.

Having completed and published his seven book action thriller series, he is presently writing a historical fiction trilogy.

As light relief he is also writing a book of bedtime stories for young children, based on the adventures of a small dog who lives in Spain

V4 Vengeance: Hitler’s Last Vengeance Weapons Are Going To War
is a terrorist thriller by Nigel Seed. Major Jim Wilson, desperate to
find a job after the British Army downsizes, accepts an assignment
from Romanoff, a wealthy Russian, to search for a hidden World
War 2 U boat base in Germany. He and his team find submarines
and missiles at the base and r Read more of this blog post »
Like  •  0 comments  •  flag