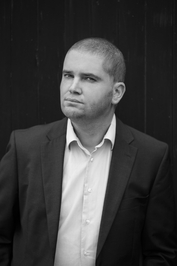 Praise for The Maker of Swans

‘At its best, the prose is glorious, combining an ear for deep cadences of language with a phenomenal acuity of vision…O’Donnell is clearly a major talent.’

‘There’s sufficient invention and engaging strangeness to keep the reader enfolde Paraic O’Donnell's first novel, The Maker of Swans, was named the Amazon Rising Stars Debut of the Month for February 2016, and was shortlisted for the Bord Gáis Energy Irish Book Awards in the Newcomer of the Year category.

Praise for The Maker of Swans

‘At its best, the prose is glorious, combining an ear for deep cadences of language with a phenomenal acuity of vision…O’Donnell is clearly a major talent.’

‘There’s sufficient invention and engaging strangeness to keep the reader enfolded, though it is O’Donnell’s arresting descriptions of the natural world that are likely to live longest in the mind.’

‘A dark, elegant celebration of the power and beauty of words.’

‘An oddly beautiful tale of magic and art.’

– Helen Macdonald, author of H is for Hawk

‘I devoured this book, and it kept me guessing right to the very end. Line by line, Paraic's writing contains some of the most beautifully turned phrasing I've read in a long while.’

– Laura Barnett, author of The Versions of Us

– Sandra Newman, author of The Country of Ice Cream Star

“I am not myself. It was a common enough form of words. It was what people said of themselves at such times as these. Perhaps it was not so much out of the ordinary. But the words were not right, not for this. It was a worse thing than becoming someone else, a more awful thing. There was a lack, when he sought himself, an incompleteness. He reached inward and found absences. He felt it when he tried to right himself, stumbling on a skewed board; the heft gone at his centre. Derelict—that was the word. He was derelict, or would be soon. He would stand day and night in the unseen weather, sheltering nothing living.”
― Paraic O'Donnell, The Maker of Swans
tags: identity, self
0 likes
Like

“He was a monster always, and filled with jealousy, but my father restrained him. Once he was gone, well …”
― Paraic O'Donnell, The House on Vesper Sands
0 likes
Like

“How inconvenient for the Gowdens, he said. But I suppose it won’t be terribly difficult to find another serving girl. One is much like another, after all.”
― Paraic O'Donnell, The House on Vesper Sands
0 likes
Like

John Burnside
author of
The Dumb ...

Elena Ferrante
author of
My Brilli...

Helen Macdonald
author of
H is for ...