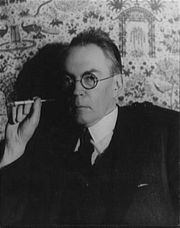 The Nightmare Has Triplets (4 books)
by
James Branch Cabell

“The optimist proclaims that we live in the best of all possible worlds; and the pessimist fears this is true.”
― James Branch Cabell, The Silver Stallion
tags: optimism, pessimism
2199 likes
Like

“There is not any memory with less satisfaction than the memory of some temptation we resisted.”
― James Branch Cabell
30 likes
Like

“For although this was a very heroic war, with a parade of every sort of high moral principle, and with the most sonorous language employed upon both sides, it somehow failed to bring about either the reformation or the ruin of humankind: and after the conclusion of the murdering and general breakage, the world went on pretty much as it has done after all other wars, with a vague notion that a deal of time and effort had been unprofitably invested, and a conviction that it would be inglorious to say so.”
― James Branch Cabell, Figures of Earth
21 likes
Like

MAY FANTASY -- This poll decides which two books go into the run off poll to decide the Fantasy Book of the Month for May.