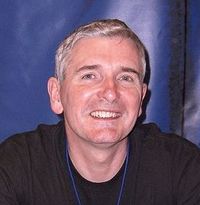 Born
in Liverpool, The United Kingdom
Website
http://mikeandpeter.com/
Genre
Comics & Graphic Novels, Science Fiction & Fantasy, Mystery & Thrillers
Member Since
February 2013
edit data
Librarian Note: There is more than one author in the GoodReads database with this name. See this thread for more information.
Mike Carey was born in Liverpool in 1959. He worked as a teacher for fifteen years, before starting to write comics. When he started to receive regular commissions from DC Comics, he gave up the day job.

Since then, he has worked for both DC and Marvel Comics, writing storylines for some of the world's most iconic characters, including X-MEN, FANTASTIC FOUR, LUCIFER and HELLBLAZER. His original screenplay FROST FLOWERS is currently being filmed. Mike has also adapted Neil Gaiman's acclaimed NEVERWHERE into comics.

Somehow, Mike finds time amongst all of this to live with his wife and children in North London. You can re Librarian Note: There is more than one author in the GoodReads database with this name. See this thread for more information.
Mike Carey was born in Liverpool in 1959. He worked as a teacher for fifteen years, before starting to write comics. When he started to receive regular commissions from DC Comics, he gave up the day job.

Since then, he has worked for both DC and Marvel Comics, writing storylines for some of the world's most iconic characters, including X-MEN, FANTASTIC FOUR, LUCIFER and HELLBLAZER. His original screenplay FROST FLOWERS is currently being filmed. Mike has also adapted Neil Gaiman's acclaimed NEVERWHERE into comics.

Somehow, Mike finds time amongst all of this to live with his wife and children in North London. You can read his blog at www.mikecarey.net. ...more

On another level entirely, I'm a little worried about accidental revisionism. Sometimes when you come back to a series after a long absence, your perspective has changed in ways that become problematic. I did a blog post here on Goodreads about exactly this. If I felt that was happening, I think I'd have to abandon the effort rather than write a Castor novel that felt like a fake or a pastiche...(less)
flag
View 2 comments
Whilst I am thrilled for your recent successes with The Girl With All The Gifts etc, I am still on the edge of my seat waiting for the end of the Felix Castor series. Will I ever be put out of my misery? ;-)
Mike Carey See previous answer (just posted). I really want to finish the series, but I won't make any glib promises. I'll do it if I can do it justice...
flag
See all 14 answers from Mike Carey…

Last week, the amazing Claire Weaver invited me to take part in the Writers Blog Tour, having been invited herself the week before by our mutual friend John Hunter. The basic idea is that all writers involved in the tour answer the same four questions on their blogs, then invite some other writers they know to do the same thing, effectively passing the baton. So it’s the questions that are making Read more of this blog post »
5 likes · Like  •  10 comments  •  flag

“Yahweh: You've been unhappy because you've desired things that cannot be.

Lucifer: That's what desire IS. The need for what we can't have. The need for what's readily available is called greed.”
― Mike Carey, Lucifer, Vol. 11: Evensong
tags: devil, god, lucifer, yahweh
198 likes
Like

“We make our own monsters, then fear them for what they show us about ourselves.”
― Mike Carey & Peter Gross, The Unwritten, Vol. 1: Tommy Taylor and the Bogus Identity
tags: creation, frankenstein, monsters
160 likes
Like

“They used to call the devil the father of lies. But for someone whose sin is meant to be pride, you'd think that lying would leave something of a sour taste. So my theory is that when the devil wants to get something out of you, he doesn't lie at all. He tells you the exact, literal truth. And he lets you find your own way to hell.”
― Mike Carey
tags: book-02-children-and-monsters, lucifer
152 likes
Like

Vote for October's Book of the Month!

by Jacqueline Carey
1 vote 3.1%
The Devil You Know

My partner was bemoaning her lack of "more books like Felix Castor" to read last night, when I remembered how active and engaged you've been here on Goodreads, so I thought I'd ask you if you had any recommendations.

More details: she can't stand Butcher's prose, she enjoys Aaronovitch (though we both wish you'd give him a plotting class or two). Most of the other stuff she reads for pleasure is Mundane neo-hardboiled like Rankin or Robert Parker.

Hi Owen. Thanks for the links.

I can't go with Mark on this one, and I think that critique was pretty much on the nose. Insofar as writers use sexual violence against women as a motivating event for male protagonists or an index to male villains' evil, that's lazy and thoughtless writing and hard to defend on any level.

Rape shouldn't be off-limits in comic narratives any more than it should in other fictions, but it needs to be used with caution because of the messages that you can send inadvertently. The use of rape in narrative often seems like a throwback to an earlier age - an age in which the rape of a woman was seen as primarily a loss or damage to her husband, whose exclusive rights had been infringed, or if she was unmarried, to her parents. In story, similarly, it's often the effect of the rape on the men around the raped woman that's given most narrative weight.

This isn't limited to comics, by any means. The Clint Eastwood movie GRAN TORINO provides a pertinent recent example to show how this kind of thing still happens in mainstream films.

There's a counter-argument that says, since murder is treated very lightly and non-seriously in any number of popular fictions, why shouldn't rape (which is a less weighty crime) be treated non-seriously too. I'd always come back to that point about social messages. Murder finds very few champions in most social contexts, whereas there seem to be lots of people who are prepared to step up to the plate and defend rape. Not on principle, obviously, but finding extenuating circumstances, blaming the victim, distinguishing between "real" rape and other things that only look like rape, et cetera.

I've used rape a handful of times in my own stories (the artificial rape of Jayesh in Lucifer, an unnamed woman in Unwritten 31.5, Anna-Elizabeth Rausch in 32.5) but I like to think I've always given it the narrative weight it needed and never used it either to motivate a hero or simply to produce a sensational effect. Having said that, of course, it's really only the reader who can make those determinations.

Hey Mike, being a comics writer yourself, I'd be interested in what you thought about this little interview with Millar on his philosophy of comic book writing and a critique of it by a female comic-book reader who took issue with some of the themes he discussed that she took as sexist. Here are the two links if you're interested:

That's really good to hear, Owen. I've been talking about coming back to the X-books for a one-off. I love those characters...

Hey Mike, thanks for the add. I enjoyed the direction you took the X-Men on Messiah Complex. It was one of the things that got me back into comics, and later on, into writing. Great work.