,
Discover new books on Goodreads
See if your friends have read any of Russell Brand's books 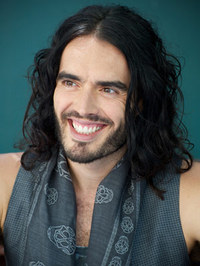 In October 2010, Brand married pop singer Katy Perry. The two separated in December 2011.
Librarian Note: There is more than one author in the Goodreads database with this name.

In October 2010, Brand married pop singer Katy Perry. The two separated in December 2011.
Librarian Note: There is more than one author in the Goodreads database with this name.
...more

Russell Brand isn't a Goodreads Author (yet), but they do have a blog, so here are some recent posts imported from their feed.

I Want to Believe

The world isn’t made of atoms, it’s made of stories. The World Cup is an arena in which narratives are fulfilled. Heroes, villains, scapegoats, underdogs, triumphs, near-misses and tragedies, all are played out on a global stage, a pagan drama in a secular age.

Here I am, another World Cup, staying up late, worrying, hoping, like a heroine in a Motown song

3.70 avg rating — 856 ratings
Quotes by Russell Brand  (?)
Quotes are added by the Goodreads community and are not verified by Goodreads. (Learn more)
“I couldn't possibly have sex with someone with such a slender grasp on grammar!”
― Russell Brand
680 likes
Like

“Even as a junkie I stayed true [to vegetarianism] - 'I shall have heroin, but I shan't have a hamburger.' What a sexy little paradox.”
― Russell Brand, My Booky Wook
528 likes
Like

“It's difficult to believe in yourself because the idea of self is an artificial construction. You are, in fact, part of the glorious oneness of the universe. Everything beautiful in the world is within you. No one really feels self-confident deep down because it's an artificial idea. Really, people aren't that worried about what you're doing or what you're saying, so you can drift around the world relatively anonymously: you must not feel persecuted and examined. Liberate yourself from that idea that people are watching you.”
― Russell Brand
tags: russell-brand
421 likes
Like

Is this you? Let us know. If not, help out and invite Russell to Goodreads.