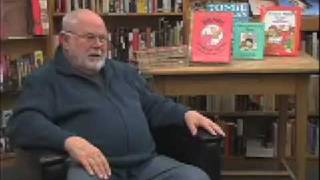 He had a five-decade writing and illustrating career during which he published more than 270 books, including 26 Fairmount Avenue, Strega Nona, and Meet the Barkers.

He had a five-decade writing and illustrating career during which he published more than 270 books, including 26 Fairmount Avenue, Strega Nona, and Meet the Barkers.

Tomie dePaola and his work have been recognized with the Caldecott Honor Award, the Newbery Honor Award, the Laura Ingalls Wilder Award, and the New Hampshire Governor's Arts Award of Living Treasure. ...more

Tomie dePaola isn't a Goodreads Author (yet), but they do have a blog, so here are some recent posts imported from their feed.

1980. Photograph by Kelly Wise in the Wilmot Flat, NH, kitchen.

This afternoon, one year ago, the call came that Tomie had died when an attempt was made to put a feeding tube through his nostril. The effort had dislodged a blood clot.

My greatest fear was that Tomie wouldn’t be given enough time to recover from his fall and the surgery that followed. Greatest fear realized.

One year later, it is inco

“Reading is important, because if you can read, you can learn anything about everything and everything about anything.”
― Tomie dePaola
tags: gaining-knowledge, literacy, reading-books
66 likes
Like

“In a town in Calabria, a long time ago, there lived an old lady everyone called Strega Nona, which meant "Grandma Witch".”
― Tomie dePaola, Strega Nona
tags: children, potions, witch
6 likes
Like

“The rose is red, the violet's blue,
The honey's sweet, and so are you.
Thou art my love and I am thine;
I drew thee to my Valentine.
The lot was cast and then I drew,
And fortune said it should be you.”
― Tomie dePaola, Tomie dePaola's Mother Goose
1 likes
Like