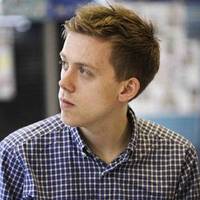 Owen Jones isn't a Goodreads Author (yet), but he does have a blog, so here are some recent posts imported from his feed.

All the Labour candidates have tacked to the left, but do they really mean it? | Owen Jones

One question haunts the party’s leadership race: whether contenders are only saying what members want to hear

Chuka Umunna’s description of the Labour party “behaving like a petulant child who has been told you can’t have the sweeties in the sweet shop” in the summer of 2015 was a somewhat crude summation of what became the prevailing attitude of Jeremy Corbyn’s internal opponents. While they wo...

“A victory is scored when your opponents are forced to debate issues they would rather leave ignored”
― Owen Jones, The Establishment: And how they get away with it
15 likes
Like

“One day, this Establishment will fall. It will not do so on its own terms or of its own accord, but because it has been removed by a movement with a credible alternative that inspires. For those of us who want a different sort of society, it is surely time to get our act together.”
― Owen Jones, The Establishment: And How They Get Away with It
tags: change, government, movement, politics, society, state, the-establishment
12 likes
Like

“It is entirely undesirable that on modern housing estates only one type of citizen should live,’ he argued. ‘If we are to enable citizens to lead a full life, if they are each to be aware of the problems of their neighbours, then they should all be drawn from different sectors of the community. We should try to introduce what was always the lovely feature of English and Welsh villages, where the doctor, the grocer, the butcher and the farm labourer all lived in the same street.”
― Owen Jones, Chavs: The Demonization of the Working Class
6 likes
Like

Is this you? Let us know. If not, help out and invite Owen to Goodreads.