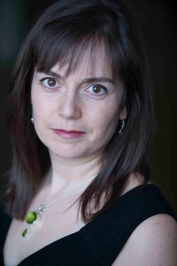 For me, sliding inside of a character and seeing the world through their eyes is the most compelling and addictive part of writing. I don't think it has to do with gender or age; I think it has to do with having empathy for them. Most humans are struggling to figure out intimacy, on many levels, and these characters speak directly to my heart. I feel that being young and male means they need to be amazingly brave in order to really get close and connect.

I guess that's the long answer. The short answer is: getting inside any of the West Coast Boys characters is a joy and not the hardest part of the novel writing process for me.(less)
flag
See all 5 answers from Michele Fogal…

Can you come see this?? I’m on the panel!

“The Chinese use two brush strokes to write the word 'crisis.' One brush stroke stands for danger; the other for opportunity. In a crisis, be aware of the danger--but recognize the opportunity.”
― John F. Kennedy
tags: chinese, crisis, danger, inspirational, opportunity
4556 likes

“For instance, on the planet Earth, man had always assumed that he was more intelligent than dolphins because he had achieved so much—the wheel, New York, wars and so on—whilst all the dolphins had ever done was muck about in the water having a good time. But conversely, the dolphins had always believed that they were far more intelligent than man—for precisely the same reasons.”
― Douglas Adams, The Hitchhiker's Guide to the Galaxy
tags: humour
9795 likes

Tove Jansson
author of
The Summe...

Shaun Tan
author of
The Arrival

K.J. Charles
author of
The Magpi...

Hi Michele, thanks for the friend request.

thanks for the friend, michelle. Care to connect on facebook as well? wwww.facebook.com/carlrbrush Happy reading.
Carl

Good luck with your Creating Writing and Twitter courses! Wish I could go.

Thanks for the add! Nice to meet you.

Good evening Michele! Hey thanks so much for inviting me to be GR pals.