Hey everyone, March's progress report for Hierarchy is up, for those keeping track!

Hey everyone, just a quick heads up - I've agreed to take some time out to do an AMA (Ask Me Anything) over on the Licanius Trilogy subreddit in a few days. I'll be online on the 9th starting at 2pm PST (10th at 9am AEDT, for Aussies). So if you have any burning questions for me, that's where and when to ask!

A new update on the next book is up on the website: http://jamesislington.com/updates.html

The Light of All That Falls Paperbacks

The Light of All That Falls is out now in trade paperback! 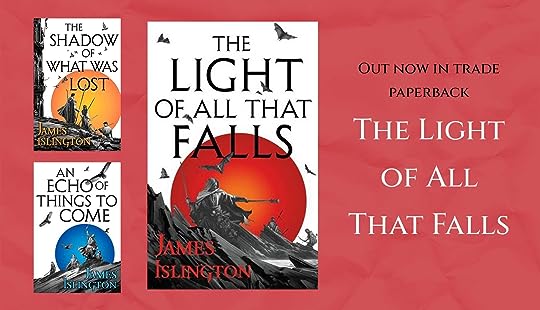 REVIEW: A Boy and His Dog at the End of the World (Elisabeth)

A Boy and His Dog at the End of the World by C.A. Fletcher

A heart-warming dystopian novel about companionship and never giving up on the ones you love, human or animal.

This book was everything a thirteen-year-old Elisabeth could have wanted—dystopian fiction, survival, a main character who loves to read, dogs—and adult Elisabeth really enjoyed it too. A Boy and His Dog at the End of the World is set in a dystopian future, generations after most of the world’s population has died off. Griz, our protagonist, lives on a secluded island with his family and his dogs, when one day a strange man lands on their shores bringing stories of far off lands, great cities and civilisations. But the man is not all that he seems. When Griz wakes up to find the man gone and his dog stolen he has no choice but to chase after him, embarking on a dangerous adventure to retrieve his friend.

The familiar but dishevelled looking world that C.A. Fletcher creates is great, and seeing it through Griz’s sheltered eyes makes for a fascinating perspective. His narrative voice perfectly captures a sense of keen child-like curiosity. And I felt a bit of that curiosity too, as the new state of the world and its history was slowly uncovered as Griz journeyed further from the safety and seclusion of his home.

The book starts with a request from the author that ‘the discoveries made as you follow Griz’s journey into the ruins of our world remain a bit of a secret…’ which I felt was a little odd at the beginning, because there didn’t seem to be anything that out there to be spoiled. Then things took a turn… and that request started to make a lot more sense. I guess I can’t really say anymore on the plot then, but be warned: your emotions will be flung around a bit.

The narrative style Fletcher used was really interesting too. The book is written as a letter from Griz to a long dead boy in a photo from our time. This was an interesting way to address the reader directly. Griz asks little questions here and there, to his imaginary friend but also to the reader: ‘Did you—in your crowded world—have those kind of quiet moments where your own mind had room enough to stalk you and play games? Or were there too many other people to let you hear the songs it wanted to sing to you—the bad ones as well as the good ones?’ This was a great technique to pull you in and make you feel a part of the story. It also made that dark future seem more real, like it actually came out of what we have now.

I really enjoyed this book. Because it’s targeted at a younger audience it was an easy quick read, but the story and the worldbuilding were really strong. 4/5 stars!

Note: there is some occasional swearing and few references to rape, but other than that this book is fairly clean.

The Unspoken Name by A.K. Larkwood

This was a great read. I was immediately pulled in by A.K. Larkwood's evocative language and interesting world. Ancient sleeping gods, cult-like religions, and slightly steampunk-esc vibes made for a fantastic backdrop. And Larkwood’s use of language brought everything to life so vividly.

The overarching quest narrative—to find and retrieve the mysterious Reliquary of Pentravesse—was a bit standard and most of the twist surrounding it and Sethennai where predictable. But this didn’t bother me because those events weren’t really the focus of the story, the characters were. The more significant and impactful quest was not the search for the Reliquary but Csorwe’s search for identity and freedom. To me this felt like a coming-of-age story in the skin of a fantasy epic (in a good way).

The characters were the core of the story, and they were really well written. Csorwe’s gradual development from quiet and naive to confident and full of agency was superb. Larkwood did a great job of showing the characters personalities and ideals not only through what they said, but through how characters spoke and acted toward each other.

Talasseres was probably my favourite character. For the most part he is a snide little jerk that deserves several slaps in the face, but I was a fan of him and Csorwe’s banter—I would love to read a book with just the two of them going on quests and being mean to each other the whole time. But there where also snippets where he let his vulnerability show, revealing genuine depth to his character. Like most of the characters he was real, fully-formed and independent. And his conclusion at the end was beautiful.

While for the most part Larkwood does a great job writing her characters there were some who fell short for me. Shuthmili in particular didn’t come across as genuine or self-defined as the other characters, and I just couldn’t get invested in her. Which is a shame because I felt like she had a lot of potential.

Overall though, I really enjoyed The Unspoken Name and am keen to read the next book in the series when it comes out!

NOTE: This book does contain quite a bit of crude language and some sexual references, so if you’re looking for clean fantasy it might not be for you.

The Last Wish by Andrzej Sapkowski

The Last Wish was a fun read. I came into the book fairly blind having not played the games or watched the Netflix series but I definitely enjoyed myself. It’s told through a series of short stories each preceded by a framing narrative, ‘The Voice of Reason’, which provides some context and overarching narrative. Being someone that enjoys reading and writing short stories I really liked this structure. Because each story is self-contained it made it easy to jump in and follow what was happening. There aren’t any big political plots or world altering events to keep track of, all you need to know is Geralt is a Witcher, a hunter of strange creatures and monsters. A lot of fantasy relies on big worlds, lots if characters, and interweaving plots, so this was a bit different—but in a good way.

The stories themselves are reimaginings of classic fairy tales and folk tales. But even though they’re familiar—with classics like Beauty and the Beast, The Arabian Nights, Snow White and the Seven Dwarves, and (my personal favourite) Hans My Hedgehog—they don’t read like simple retellings. The original stories are pulled apart and altered, introduced to a darker world where things aren’t always as they appear. New creatures and characters are incorporated and the plots are twisted into something new.

The world of the Witcher is quite dark and disturbed, but the language and writing doesn’t always hold that same tone. The writing came across as somewhat light and humorous to me. There are purposeful jokes and some great banter between characters, but I felt sometimes the writing was funny without meaning to be as well—likely because English is not the original language of the book. There were times where the sentence structure or word choice seemed odd, which if you’re reading hoping for a dark gritty fantasy could be a little off-putting, but I felt it added to the charm of the book. I can’t help but think it would be quite a different experience reading it in the original Polish though.

The Last Wish is an easy enjoyable read and I’m keen to follow it up with The Sword of Destiny, Andrzej Sapkowski's second collection of Witcher short stories.

Audible Daily Deal (22nd June, US) - The Shadow of What Was Lost

Hey everyone, just a heads up that The Shadow of What Was Lost - narrated by the excellent Michael Kramer - is Audible's Daily Deal! It's $5.95 for the day (22nd June), US only I believe.

Progress is being made! An update on James's next book, The Will of the Many, is up on the website: http://jamesislington.com/updates.htm...