Discover new books on Goodreads
See if your friends have read any of Stacey M. Piotrowski's books 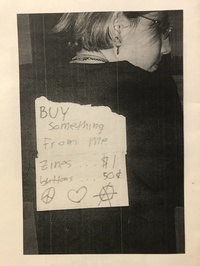 I've been writing zines since 1999. Currently (since 2006) sporadically publishing the literary nonfiction memoir/perzine Phases of the Moon. As of January 2022 I am (slowly) migrating to LibraryThing, username: moonmoth.

I've been writing zines since 1999. Currently (since 2006) sporadically publishing the literary nonfiction memoir/perzine Phases of the Moon. ...more

“How many more of these stinking, double-downer sideshows will we have to go through before we can get ourselves straight enough to put together some kind of national election that will give me and the at least 20 million people I tend to agree with a chance to vote FOR something, instead of always being faced with that old familiar choice between the lesser of two evils?”
― Hunter S. Thompson, Fear and Loathing on the Campaign Trail '72
tags: hunter-s-thompson, politics
60 likes

“Just the other day the AP wire had a story about a man from Arkansas who entered some kind of contest and won a two-week vacation--all expenses paid--wherever he wanted to go. Any place in the world: Mongolia, Easter Island, the Turkish Riviera . . . but his choice was Salt Lake City, and that's where he went. Is this man a registered voter? Has he come to grips with the issues? Has he bathed in the blood of the lamb?”
― Hunter S. Thompson, Fear and Loathing on the Campaign Trail '72
tags: arkansas, democracy, salt-lake-city, utah, voting
21 likes

“Liberalism itself has failed, and for a pretty good reason. It has been too often compromised by the people who represented it.”
― Hunter S. Thompson, Fear and Loathing on the Campaign Trail '72
tags: idealism, liberalism, politics
23 likes

“The only thing I ever saw that came close to Objective Journalism was a closed-circuit TV setup that watched shoplifters in the General Store at Woody Creek, Colorado.”
― Hunter S. Thompson, Fear and Loathing on the Campaign Trail '72
7 likes

“At the stroke of midnight in Washington, a drooling red-eyed beast with the legs of a man and a head of a giant hyena crawls out of its bedroom window in the South Wing of the White House and leaps fifty feet down to the lawn...pauses briefly to strangle the Chow watchdog, then races off into the darkness...towards the Watergate, snarling with lust, loping through the alleys behind Pennsylvania Avenue, and trying desperately to remember which one of those fore hundred identical balconies is the one outside of Martha Mitchell's apartment....Ah...Nightmares, nightmares. But I was only kidding. The President of the United States would never act that weird. At least not during football season.”
― Hunter S. Thompson, Fear and Loathing on the Campaign Trail '72
tags: nixon, politics, werewolf
6 likes