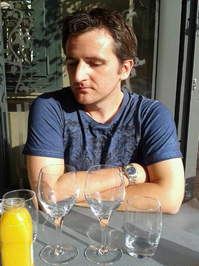 All the best - and thank you! Honoured.
Nick(less)
flag
See 1 answer from Nick Soulsby…

Who was handling drums the first time the name Nirvana appeared on a show flyer? Who was drumming the first time Nirvana played a show in Seattle? Who was the guy on drums when Jonathan Poneman and Bruce Pavitt of Sub Pop decided they were worth a single? Dave Foster was drummer for Nirvana during […]
View more on Nick Soulsby's website »
Like  •  0 comments  •  flag

Nick Soulsby is currently reading
Hack Attack: How the Truth Caught Up with the World's Most Powerful Man
by Nick Davies
bookshelves: currently-reading

Here are a few numbers. In the court trials that took place over the last few years, the representatives of our democracy, the Crown Prosecution Service, were able to muster £1.7 million, one full time solicitor and one administrative assistant to make the case. News International spent £30-40 million aggressively defending its representatives and deployed an army of legal representatives and support staff. Why does it matter? It’s an example of what happens when greater powers are invested in private corporations than in our public services. The corporation is able to devastate any attempt to make them take responsibility for the harm they’ve done to the public good. The government that the people have elected to represent, as best as possible, their collective interests and to protect them from harm is no longer able to wield true power in the face of the buying power possessed by the corporations. There is nothing defending the lives and well-being of the public; we are all at risk.

It goes deeper. News International is an organisation that recognises that governments are the only bodies able to exercise any control over their behaviour. Therefore News International deliberately advocates the shrinking of governments, the reduction of their revenue, the weakening of their regulatory powers, the most stringent controls over their spending. News International does so in order to ensure that it possesses a competitive advantage over the only organisation able to exercise any restraint upon their corruption. It attacks tax levels, attacks public service in general, in order to reduce the expertise and skills available to the judiciary, to the police force, to the tax authorities, to all levels of our political establishment making it less likely wrong-doing will be detected, prevented or punished.

The hacking scandal was not a case of a few celebrities getting their fingers burned. Of the hackers exposed after all those years, one had hacked a minimum of 5,500 people, another had hacked a further 1,600. Those people included the family and friends of a couple who’s child was abducted. It included the family and friends of a murdered school girl – the newspaper’s representatives went further and didn’t hand over evidence that at the time they believed indicated where the girl was, they wanted to claim credit themselves and to sell more papers so didn’t give it to the police. News International went after the family and friends of two girls murdered in the town of Soham. In other words, if you, your family, your parents, your children, your friends – anyone you know – gets caught up in a tragedy, all their conversations and information (medical records, police records, bank records, employment records, diaries, etc.) and yours too would immediately have become something News International stole and used to make profit for their company.

News International destroyed 210 million emails during the course of the investigations. The leaders within the police service who led the early investigations were being wined and dined by, and were friends with, the people they were meant to investigate – the police deliberately misled parliament, the public, the courts and the inquiries. The Press Complaints Commission which was meant to ensure that newspapers respected the laws of this country saw its role as being to deflect criticism away from its richest benefactors and was too scared to speak out against them because it would mean News International (the Sun, the Times, the News of the World, Sky News) would send teams out to attack and slur them. The governments, both Labour and Conservative, were too busy trying to ensure good coverage and to avoid attempts to undermine them with sleaze stories, critical coverage and attacks that they were unwilling to speak out and decided instead to give jobs to people who had broken the law, to attend their parties, call them friends, privilege their views. News International was allowed to tell your government and my government what their policies should be. Surely that’s meant to be the right of the people?

At root, in amidst the sheer scale of it all, there’s a simpler story of bullies and damaged people who gain satisfaction from the exercise of power over ‘the little people'; it’s a tale of people who grew up as we all did on the bible tales of doing unto others as you would have done unto yourself…Then abandoned that in favour of personal profit over any moral consideration.

It’s an amazing book. Well written, lengthy but with so many moments of stunning revelation that you’ll barely be able to close your mouth at times for sheer fury. I found myself punching the air through sheer frustration as the suit-wearing white-collar criminals slipped through the net (while setting themselves up as judge and jury over everyone else.) Amazing. Nick Davies’ “Hack Attack”. An amazing book and I’d like to bow respectfully to the author for what sounds like a harrowing experience over more than a decade. ...more "

“In the book John Barleycorn, he describes, with quite some clarity, his drinking in his youth—he died of complications related to being an alcoholic. He talks about this point where he’s so drunk he drinks himself sober, and it’s this psychedelic ‘white light’ experience of reality because his neurology is so rearranged that it’s similar to being on LSD. I found that inspirational—not the drinking! The state of mind.”
― Nick Soulsby, Swans: Sacrifice And Transcendence: The Oral History
0 likes
Like