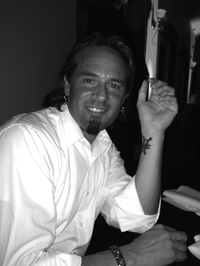 A native Texan, Matthew grew up in the Ft. Worth/Dallas area and found a love for music and the bass guitar at an early age. He started playing in bands as early as high school, some of whom were: Xpedition, Love Coma, The Mudcats, iMi, and Never Your Zero. During this time, he has shared the stage with acts such as: Pat Travers, Sixpence None the Richer, Fuel, Puddle of Mudd, Candlebox, Saliva, Evans Blue, Eve 6, Faster Pussycat, and Sebastian Bach just to name a few.

Texas. It’s the second largest state in the United States and home to more than twenty seven million people. It's physically located in the south central position of the country, and shares its borders with Louisiana, Arkansas, Oklahoma, and New Mexico. For those who love the beach, it’s south eastern border is formed by the Gulf of Mexico. It’s not the clear blue waters of Tahiti mind you, but it Read more of this blog post »
View more on Matthew Gene's website »
Like  •  0 comments  •  flag

“We are made of stardust, our whole body consists of material that has been here before the beginning of time.”
― Giorgio A. Tsoukalos
tags: ancient-aliens
16 likes

“Realize deeply that the present moment is all you have. Make the NOW the primary focus of your life.”
― Eckhart Tolle, The Power of Now: A Guide to Spiritual Enlightenment
tags: carpe-diem, live-in-the-moment, realization
1025 likes

“Our entire universe is contained in the mind and the spirit. We may choose not to find access to it, we may even deny its existence, but it is indeed there inside us...”
― Dr. Alexander "Sasha" Shulgin
11 likes

“All you need is love. But a little chocolate now and then doesn't hurt.”
― Charles M. Schulz
tags: chocolate, food, humor
26332 likes