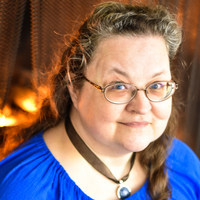 Born
The United States
Website
http://kristenstieffel.com/
Twitter
KristenStieffel
Genre
Fantasy, Science Fiction
Member Since
July 2011
URL
https://www.goodreads.com/kristen_stieffel
edit data
Kristen Stieffel is a writer and freelance editor specializing in science fiction and fantasy. She provides a full range of editorial services and has worked on projects for both the general market and the Christian submarket.

Kristen is an elder in the Presbyterian Church USA and has taught adult Bible studies for many years. She's also a knitter, despite living in Florida. In the state that pioneered air conditioning, sweaters are often worn indoors. Kristen Stieffel is a writer and freelance editor specializing in science fiction and fantasy. She provides a full range of editorial services and has worked on projects for both the general market and the Christian submarket.

Kristen is an elder in the Presbyterian Church USA and has taught adult Bible studies for many years. She's also a knitter, despite living in Florida. In the state that pioneered air conditioning, sweaters are often worn indoors. ...more

I have a story in the July 2015 issue of Havok. It's our SciFi vs. Fantasy issue. The featured author is Patrick Carr. This is a contest issue, and the winner is my friend Tina Yeager. Second place went to another friend, Will Ramirez. I'm thrilled to bits to be in this issue with such fantastic writers!

Kristen Stieffel is currently reading
The Psalm 119 Experience: A Devotional Journey You Will Not Forget
by John Kramp
bookshelves: religion, currently-reading

Kristen Stieffel is currently reading
How Successful People Grow: 15 Ways to Get Ahead in Life
by John C. Maxwell
bookshelves: currently-reading

“sometimes paraphrase our own Scriptures. For example, the verse above is modeled on Galatians 3:28, which says, “There is no longer Jew or Greek, there is no longer slave or free, there is no longer male and female; for all of you are one in Christ Jesus” (NRSV). This wisdom is almost two thousand years old, yet we still struggle to achieve racial and gender equality. One of the things I wanted to explore in this storyworld is what life would look like if people lived as if they really believed this verse is true. One fact the church has historically used to rationalize the sidelining of women is that Jesus, the Twelve, and the apostle Paul were all men. Meanwhile the first evangelist, Mary Magdalene, is unjustly slandered as a prostitute, and Junia, whom Paul called “prominent among the apostles” (Romans 16:7), is all but forgotten. Many have even tried to recast her as a man.”
― Kristen Stieffel, Alara's Call
0 likes
Like

“My decision to use a feminine Redeemer anyway was not made merely to provoke. It’s an attempt to inspire introspection. If people are bothered by the idea of a feminine Creator or Redeemer, they should consider why they’re bothered. My faith tradition teaches that God is beyond gender, because God is not human. God is Other, but since both male and female are made in God’s image, we can conclude that God’s nature encompasses”
― Kristen Stieffel, Alara's Call
0 likes
Like

“Pfft.” Alara returned to the chair and sat. “Bóhjetien isn’t the one who went to seminary. Listen to me.” She stared at him until he looked her in the eyes. “A wife and daughter dying in childbirth is not the will of Telshi. That is the work of the Adversary.” “Is your god not omnipotent, then?” “Yes, Telshi can do anything. That doesn’t mean Telshi will do anything.”
― Kristen Stieffel, Alara's Call
0 likes
Like

“Strength is the capacity to break a Hershey bar into four pieces with your bare hands - and then eat just one of the pieces.”
― Judith Viorst, Love & Guilt & The Meaning Of Life, Etc
tags: chocolate, strength
2163 likes
Like

“It is very risky. But each time a child opens a book, he pushes open the gate that separates him from Elsewhere.”
― Lois Lowry
2383 likes
Like

“I have always imagined that Paradise will be a kind of library.”
― Jorge Luis Borges
tags: books, library
29158 likes
Like

“Happiness is like a butterfly which, when pursued, is always beyond our grasp, but, if you will sit down quietly, may alight upon you.”
― Nathaniel Hawthorne
tags: inspirational, life-happiness
1806 likes
Like

THE Group for Authors! — 11907 members — last activity 6 hours, 49 min ago
This is a group for authors to discuss their craft, as well as publishing and book marketing.

Thanks for your Goodreaads friendship, Kristen!