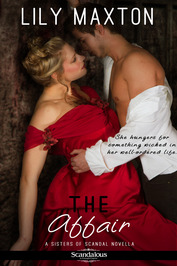 Website
http://lilymaxton.com
Twitter
LilyMaxton
Genre
Romance
Influences
Lisa Kleypas, Julia Quinn, Julie Anne Long
Member Since
March 2014
edit data
Lily Maxton grew up in the Midwest, reading, writing, and daydreaming amidst cornfields. After graduating with a degree in English, she decided to put her natural inclinations to good use and embark on a career as a writer.

When she’s not working on a new story, she likes to tour old houses, add to her tea stash, and think of reasons to avoid housework.

“You have ink on your cheek,” he noted softly.

She glanced at his dirty hands. “That’s your fault. I hope it washes off.”

“It should.” He stared at her as though trying to puzzle her out. “When I was first introduced to you last Season, I thought you were the picture of the wilting wallflower. But you’re not, are you?”

“I thought I was,” she said, nearly as puzzled as he was.

“Not with you,” she agreed.

“Probably because I’m so unimpressive.”

“Most likely,” she said.

And after a heartbeat, they smiled at the same time.”
― Lily Maxton, The Love Match
3 likes
Like

“There was nothing ethereal about Adam Radcliff. He was far more connected to the land than to heaven--elemental, primitive…virile.

No, she thought firmly, forget about that last one.”
― Lily Maxton, The Mistake
1 likes
Like

“Was this what her life would be? Love pressed carefully into the pages of a book, where she
could admire it from a distance and never be hurt by it?”
― Lily Maxton, The Mistake
1 likes
Like