Discover new books on Goodreads
See if your friends have read any of Dylan S. Hearn's books 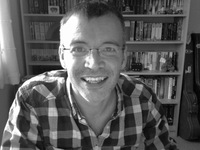 How do you deal with writer’s block?
Dylan S. Hearn By writing every day. Some days you may only write 100 words and they are all terrible, but you are still writing.
flag
What’s the best thing about being a writer?
Dylan S. Hearn I get paid to lie and make things up for a living.
flag
See all 4 answers from Dylan S. Hearn…

#Bookblogger bashing: in the end, you’re only hurting yourself #MondayBlogs

Originally posted on Rosie Amber:
Today I’m hosting a post written by Terry Tyler which I feel strongly about aswell. #Bookblogger bashing: in the end, you’re only hurting yourself. I’ve read a few posts lately about book bloggers being bullied or ‘trolled’ by writers for whom they have received bad reviews, or whose books they…

“In fact, the only things in the flat Crowley devoted any personal attention to were the houseplants. They were huge, and green, and glorious, with shiny, healthy, lustrous leaves.

This was because, once a week, Crowley went around the flat with a green plastic plant mister spraying the leaves, and talking to the plants....

Although talking is perhaps the wrong word for what Crowley did.

What he did was put the fear of God into them.

More precisely, the fear of Crowley.

In addition to which, every couple of months Crowley would pick out a plant that was growing too slowly, or succumbing to leaf-wilt, or browning, or just didn't look quite as good as the others, and he would carry it around to all the plants. "Say goodbye to your friend," he'd say to them. "He just couldn't cut it..."

Then he would leave the flat with the offending plant, and return an hour or so later with a large empty flower pot, which he would leave somewhere conspicuously around the flat.

The plants were the most luxurious, verdant, and beautiful in London. Also the most terrified.”
― Neil Gaiman, Good Omens: The Nice and Accurate Prophecies of Agnes Nutter, Witch

“If by a "Liberal" they mean someone who looks ahead and not behind, someone who welcomes new ideas without rigid reactions, someone who cares about the welfare of the people-their health, their housing, their schools, their jobs, their civil rights and their civil liberties-someone who believes we can break through the stalemate and suspicions that grip us in our policies abroad, if that is what they mean by a "Liberal", then I'm proud to say I'm a "Liberal.”
― John F. Kennedy, Profiles in Courage
tags: democrats, liberal, politics
1187 likes

Nick Jones
author of
The Unexp...