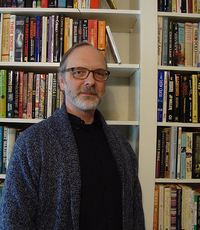 New Interview About Disciples of the Serpent and Dark Hours

Black Fox Literary Magazine was kind enough to do an interview about my newest releases.

“For some of us, books are as important as almost anything else on earth. What a miracle it is that out of these small, flat, rigid squares of paper unfolds world after world after world, worlds that sing to you, comfort and quiet or excite you. Books help us understand who we are and how we are to behave. They show us what community and friendship mean; they show us how to live and die.”
― Anne Lamott, Bird by Bird: Some Instructions on Writing and Life
tags: books, reading
2052 likes

“I felt the need to tell stories to understand myself.”
― Manuel Puig
tags: writing
12 likes

“First of all, it was October, a rare month for boys. Not that all months aren’t rare. But there be bad and good, as the pirates say. Take September, a bad month: school begins. Consider August, a good month: school hasn’t begun yet. July, well, July’s really fine: there’s no chance in the world for school. June, no doubting it, June’s best of all, for the school doors spring wide and September’s a billion years away.

But you take October, now. School’s been on a month and you’re riding easier in the reins, jogging along. You got time to think of the garbage you’ll dump on old man Prickett’s porch, or the hairy-ape costume you’ll wear to the YMCA the last night of the month. And if it’s around October twentieth and everything smoky-smelling and the sky orange and ash gray at twilight, it seems Halloween will never come in a fall of broomsticks and a soft flap of bedsheets around corners.”
― Ray Bradbury, Something Wicked This Way Comes
24 likes

Teen Horror Books — 249 members — last activity Oct 30, 2019 08:20AM
This group is for those who enjoy writing and reading horror fiction for young adults.

GOOD REVIEWS — 7324 members — last activity 10 hours, 46 min ago
This Group is only for authors who are looking for reviews and Reviewers who love to read books and share their reviews.

THE Group for Authors! — 11421 members — last activity 18 hours, 50 min ago
This is a group for authors to discuss their craft, as well as publishing and book marketing.
More of Sidney’s groups…

Thank you for joining my circle of friends.