,
Discover new books on Goodreads
See if your friends have read any of Thor Hanson's books 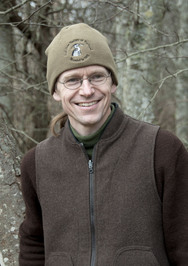 Thor hasn't connected with his friends on Goodreads, yet.

Thor Hanson is a Guggenheim Fellow, a Switzer Environmental Fellow, and winner of the John Burroughs Medal. His books include HURRICANE LIZARDS AND PLASTIC SQUID, BUZZ, THE TRIUMPH OF SEEDS, FEATHERS, THE IMPENETRABLE FOREST, and the children's favorite BARTHOLOMEW QUILL . Learn more at his website: www.thorhanson.net.

"The Triumph of Seeds" contains 35 black and white images, including photographs, historical prints, and a series of lovely new seed illustr…moreHi Keshia,

"The Triumph of Seeds" contains 35 black and white images, including photographs, historical prints, and a series of lovely new seed illustrations from botanical artist Suzanne Olive.

Good luck in the Giveaway! 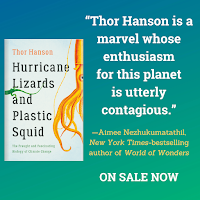 A NY Times Editor's Pick and finalist for The Pacific Northwest Book Award, Hurricane Lizards and Plastic Squid is now available in paperback across North America!  For a review, check out this one in The New York Times, and for an introduction to some of the stories in the book, here a video Thor did for WIRED.

More of Thor's books…
Quotes by Thor Hanson  (?)
Quotes are added by the Goodreads community and are not verified by Goodreads. (Learn more)
“In the past, people around the world heard the buzzing of bees as voices of the departed, a murmured conveyance from the spirit world. This belief traces back to the cultures of Egypt and Greece, among others, where tradition held that a person's soul appeared in bee form when it left the body, briefly visible (and audible) in its journey to the hereafter...Nobody knows the exact sequence of events that led to the beginning of bees, but everyone can agree on at least one thing: we know what it sounded like.”
― Thor Hanson, Buzz: The Nature and Necessity of Bees
tags: ancient-egypt, ancient-greece, bees, belief, buzz, buzzing, spirit-world, tradition
8 likes
Like

“Given time, evolution is much more likely to provide us with a multitude of solutions than it is to give us one ideal form.”
― Thor Hanson, The Triumph of Seeds: How Grains, Nuts, Kernels, Pulses, and Pips Conquered the Plant Kingdom and Shaped Human History
8 likes
Like

“By Mendel’s time, plant breeding had progressed to a point where every region boasted dozens of local varieties of peas, not to mention beans, lettuce, strawberries, carrots, wheat, tomatoes, and scores of other crops. People may not have known about genetics, but everyone understood that plants (and animals) could be changed dramatically through selective breeding. A single species of weedy coastal mustard, for example, eventually gave rise to more than half a dozen familiar European vegetables. Farmers interested in tasty leaves turned it into cabbages, collard greens, and kale. Selecting plants with edible side buds and flower shoots produced Brussels sprouts, cauliflower, and broccoli, while nurturing a fattened stem produced kohlrabi. In some cases, improving a crop was as simple as saving the largest seeds, but other situations required real sophistication. Assyrians began meticulously hand-pollinating date palms more than 4,000 years ago, and as early as the Shang Dynasty (1766–1122 BC), Chinese winemakers had perfected a strain of millet that required protection from cross-pollination. Perhaps no culture better expresses the instinctive link between growing plants and studying them than the Mende people of Sierra Leone, whose verb for “experiment” comes from the phrase “trying out new rice.”
― Thor Hanson, The Triumph of Seeds: How Grains, Nuts, Kernels, Pulses, and Pips Conquered the Plant Kingdom and Shaped Human History
3 likes
Like


The Botany of Desire: A Plant's-Eye View of the World by Michael Pollan
3 votes 42.9%
Nature's Best Hope: A New Approach to Conservation that Starts in Your Yard by Douglas W. Tallamy
2 votes 28.6%
The Omnivore's Dilemma: A Natural History of Four Meals by Michael Pollan
1 vote 14.3%
Half-Earth: Our Planet's Fight for Life by Edward O. Wilson
1 vote 14.3%
Feathers: The Evolution of a Natural Miracle by Thor Hanson
0 votes 0.0%
7 total votes
2 comments
Sign in to vote »
More...