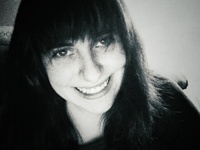 I’m a law student, a lover of horror, and an aspiring writer. Now that I’ve finished my first year of law school, I plan on writing (and reading) as much as possible.

Erica is currently reading
The Small Firm Roadmap: A Survival Guide to the Future of Your Law Practice
by Aaron Street
bookshelves: currently-reading

Erica is currently reading
The Politics of Everybody: Feminism, Queer Theory and Marxism at the Intersection
by Holly Lewis
bookshelves: currently-reading

“The world is a lot more fun when you approach it with an exuberant imperfection.”
― Chris Baty
11 likes

“A deadline is, simply put, optimism in its most kick-ass form. It's a potent force that, when wielded with respect, will level any obstacle in its path. This is especially true when it comes to creative pursuits.”
― Chris Baty, No Plot? No Problem!: A Low-Stress, High-Velocity Guide to Writing a Novel in 30 Days
tags: creativity, deadline, writing
52 likes

Melanie Benjamin
author of
The Aviat...

Hi Erica- Thank you for your friendship.

Please visit my website http://www.peteradarkenedfairytale.co.uk
to view a sample page and many other snippets about the book.
Expected release date late Jan/Feb.

Hihi~ thanks for the add! Just wondering, how did you find me? :)