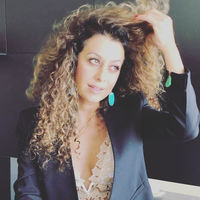 Just read Mad Love and Mad Love 2. They were so great! Fell in love with all the characters and story, will there be another book?
Colet Abedi Yes there will! Once I have everything in place I will make an announcement! xoxo
flag
Mad Love Series - Is this the correct order to read the books and novellas in? 1. Mad Love 2. Madly in Love (Novella) 3. Mad Love 2 4. Madly Addicted (Novella) I wanted to check before I started reading the series. Thanks!
Colet Abedi Yes! This is correct. ❤️🦋🙏🏼
flag
View 1 comment
See all 11 answers from Colet Abedi… 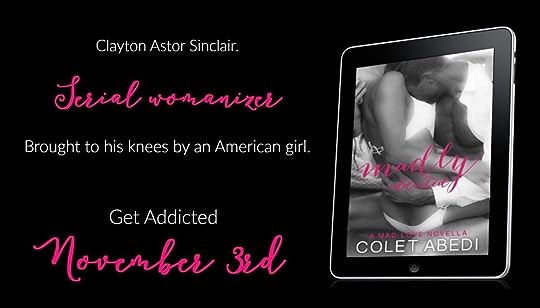 More of Colet's books…
Quotes by Colet Abedi  (?)
Quotes are added by the Goodreads community and are not verified by Goodreads. (Learn more)
“Never Make Assumptions, Do Your Best, Be Impeccable with Your Word and Don’t Take Anything Personally.”
― Colet Abedi, Mad Love
0 likes
Like

“Aedan was alive. And he was here. He was in Kingdom B. But… He was going to kill me.”
― Colet Abedi, Shadow
0 likes
Like

“No matter what the Fates may bring upon you, there is one thing you can be sure will never falter. I will always love you with the same fire of my youth until the day I am no more.”
― C.J. Abedi, The Dark King
tags: romance
3 likes
Like

“To free us from the expectations of others, to give us back to ourselves--there lies the great, singular power of self-respect.”
― Joan Didion
380 likes
Like

“A friend took me to the most amazing place the other day. It's called the Augusteum. Octavian Augustus built it to house his remains. When the barbarians came they trashed it a long with everything else. The great Augustus, Rome's first true great emperor. How could he have imagined that Rome, the whole world as far as he was concerned, would be in ruins. It's one of the quietest, loneliest places in Rome. The city has grown up around it over the centuries. It feels like a precious wound, a heartbreak you won't let go of because it hurts too good. We all want things to stay the same. Settle for living in misery because we're afraid of change, of things crumbling to ruins. Then I looked at around to this place, at the chaos it has endured - the way it has been adapted, burned, pillaged and found a way to build itself back up again. And I was reassured, maybe my life hasn't been so chaotic, it's just the world that is, and the real trap is getting attached to any of it. Ruin is a gift. Ruin is the road to transformation.”
― Elizabeth Gilbert, Eat, Pray, Love: One Woman's Search for Everything Across Italy, India and Indonesia
60 likes
Like

Book Lover's Den — 99 members — last activity Apr 23, 2018 06:02PM
This group is for all Book Lovers everyone is welcome to the group all I ask is please RESPECT all members :) Thank you

Hi there Colet! Great to be friends! I'm patiently awaiting your next book (Or not so patiently, whatever :D )